Since tendons are situated within plastic or metal ducts in post-tensioned concrete, devices that work on the basis of magnetic induction, or which use the eddy current method, are unable to detect the tendons themselves. A technique such as geo-radar (ground penetrating radar) is suitable for locating the ducts within which the tendons are housed. It cannot detect tendons in steel ducts since steel fully reflects radar waves.73±75 In this method, electromagnetic waves (frequency approx. 1 GHz) are sent from the concrete surface to the ducts by means of an antenna. These waves are backscattered by objects with a different electrical conductivity or permittivity compared to concrete. The reflected waves are registered as a function of time, as so-called A-scans (time spectrum of the wave amplitude at a single measuring point). The run-time t of the backscattered signal displays the spacing, z, between the receiving antenna and the reflector as:

with c  velocity of light,   relative permittivity of concrete (see Fig. 6.18). These measurements are carried out along a line or profile. By applying the A-scan along the profile at given points (e.g., position C), the B-scan is obtained (Fig. 6.18). The x-axis is the position of the antenna on the profile, the z-axis contains the grey or coloured code of the received A-scan at this point of the profile. Reflectors (e.g., tendon ducts) positioned perpendicular to the profile create a typical hyperbola in the B-scan: 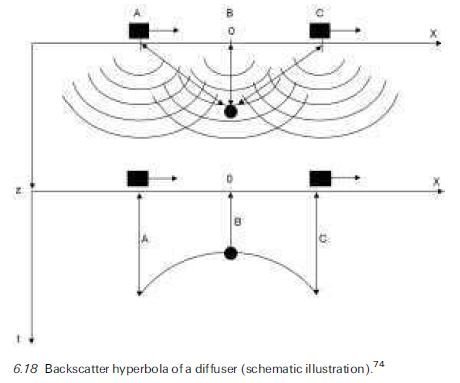 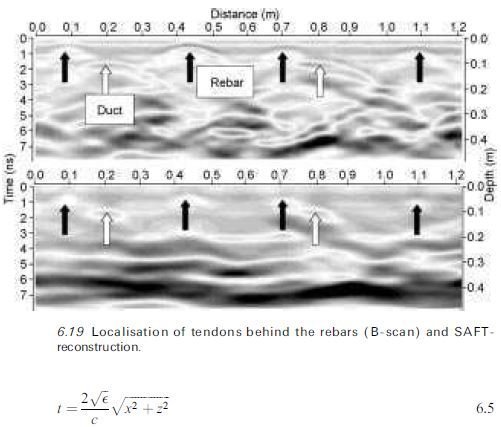 As the radar antenna approaches the reflector, the run-time gets shorter.

The location of the ducts within which the tendons are housed is shown in Fig. 6.19. The lower image is enhanced to give a better representation of the reflectors. The position of the reflector can be computed using the B-scan by means of the SAFT algorithm76,77 (see also Section 6.7.4). Every point inside the area under consideration can be assumed to be a possible reflector. The amplitudes along the associated backscatter hyperbola are added with respect to the phase. A large signal in the reconstructed SAFT image denotes a possible reflector. The measurements are influenced by moisture and salt in the concrete. The wave propagation speed reduces and the reflected waves are considerably attenuated, which makes locating the ducts more difficult. There are suitable antenna systems (monostatic antennas which are oriented parallel to the tendons) commercially available for this radar method. The position of the antenna is measured with a position recorder. Execution and evaluation of the radar measurements must be carried out by trained staff. 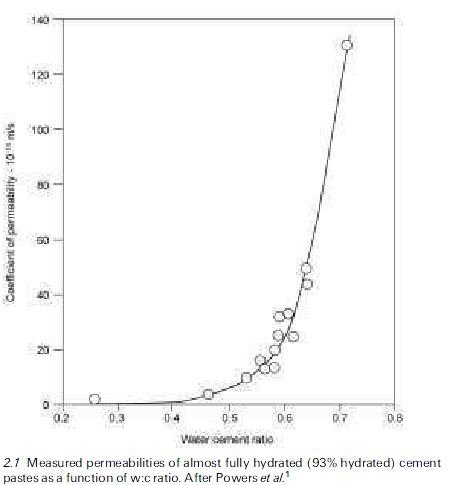