There are many models of the mechanical behaviour of frc, within some (but certainly not all) of which one can find some explanation for time dependent behaviour. A full description of all such models would require its own chapter and so this discussion is restricted to those models which explicitly address degradation. Models range from empirical descriptions of the strength loss process under natural and accelerated ageing, to complex analytical treatments based on consideration of micro-mechanical changes at the fibre-matrix interface. Some models have attempted to combine the two. The models tend to reflect the debate surrounding the degradation mechanisms described above in that each of the current models is based on an assumption concerning the main mechanism in action, i.e. that degradation is caused either by matrix/interface densification, or fibre strength loss.

The earliest model in which a durability issue can be recognised is the `ACK’ model describing the behaviour of brittle matrix composites (Aveston et al., 1971). Examination of equation 9.2 shows that increases in matrix strength and/ or decreases in fibre strength, both of which can be observed in some frc with time, may reduce the effective value of Vf to below the critical value and thus change the failure mode from multiple cracking to single fracture. This can be easily avoided by careful design of the composite. Assuming that there is sufficient fibre to avoid single fracture, then after the first matrix crack (i.e., regions II-IV, Fig. 9.2) it is a combination of fibre strength and `bond strength’ (i.e., matrix densification) that controls behaviour; most models can be classified as assuming that one or the other of these parameters is dominant.

Matrix densification models The model of Katz and Bentur (1996) was developed for carbon-frc but has general application. It is based on the principle that `physical densening of the matrix’ is the cause of strength and toughness loss with time. Two concurrent processes were modelled; the increase in fibre-matrix bond with time, and the reduction in `support length’ ls of an inclined fibre forced to bend while bridging a matrix crack. The latter of these processes was first proposed as contributing to the degradation of frc (specifically glass-frc) and modelled by Stucke and Majumdar (1976), who also provided many supporting electron micrographs showing the process in action. As the matrix hardens, the support zone (Fig. 9.12) becomes smaller, i.e. less of the matrix crumbles under the fibre. The radius of curvature R and the support length ls decreases and the bending stress in the fibre, given by

is increased. The Katz and Bentur model also takes into account additional factors such as the non-uniform fibre lengths caused by breakage during mixing. Bond and support length were assumed to vary with time at a similar rate to the compressive strength of the matrix. The bond processes alone were shown to cause a monotonic increase in strength efficiency of the fibres, while toughnessefficiency peaked after ~10 days; both parameters then settled to a constant value within 40 days. The support reduction process alone caused the `active fibre fraction’ to continuously decrease with time although it is not clear whether this is asymptotic beyond 60 days. This led to short-term peaks in both strength and toughness efficiencies, which tailed off up to 90 days; again, whether this is asymptotic is not clear. Combining the two effects produced curves that closely matched the behaviour of real carbon-frc composites under accelerated ageing for up to 200 days at 60ëC (Fig. 9.13). The model was later extended (Katz, 1996) to account for the effect of variations in fibre modulus and showed that the matrix densification degradation mechanism increases in severity as fibre modulus or radius increases, and does not apply for `ductile’ fibres. This was confirmed by experiments on frc made with a range of carbon and polymer fibres.

The model of Kim et al. (1999), developed for cellulose-frc, also assumes that degradation is caused by increases in bond with time. Modelling is based around the concept of the fracture toughness of the material being equal to the sum of the stress intensity factor (sif) caused by loading and the negative sif caused by closing traction of fibres across a crack. This is an extension of the concept first presented by Naaman and Shah (1979). The model requires 14 separate input parameters including the interfacial chemical debond energy and the fibre snubbing coefficient, some of which are awkward to measure, and is solved numerically. It does predict broad trends in ageing of cellulose-frc but rests on a `one crack failure’ assumption which is invalid for most frc with  Vf > Vfc. Also derived from the Naaman and Shah concept is the model advanced by Mobasher and Li (1995), based on a fracture mechanics/finite element treatment of the change in pull-out behaviour with interfacial stiffness.

The model is designed around steel-frc. They calculated increases in interfacial stiffness, and adhesional and frictional bond of roughly 4 and 2 respectively after 3 days of accelerated ageing. 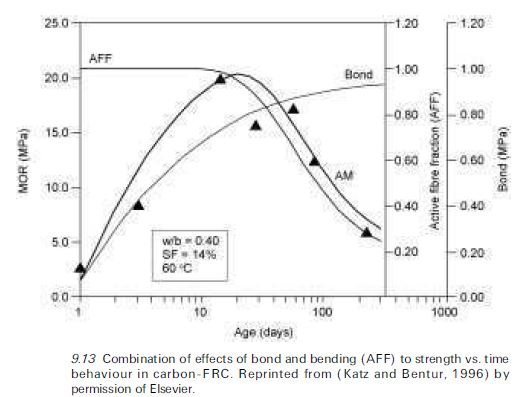 Fibre strength loss models
Purnell and co-workers (Purnell et al., 2001a; Purnell and Beddows, 2005) have taken a different approach in a model designed around glass-frc but with wider application. They modelled strength loss in fibres (and thus composites) as being caused by the slow, subcritical growth of surface flaws on the fibre. A stress corrosion process known as `static fatigue’ is assumed to drive this process, which in alkaline environments can be triggered by very small stresses (e.g., shrinkage or thermal mismatch stresses) and may be aggravated by the growth of portlandite crystals at the interface. By combining relations describing the fracture mechanics of fibres, the growth of flaws and `rule of mixtures’ theory, they derived a relatively simple relationship between normalised strength S (= strength  original strength) and time t controlled by a single parameter k which is a function of temperature T in an Arrhenius relationship (equations 9.5 and 9.6).

This allows the hot-water accelerated ageing process to be rationalised and used to predict strength-time curves for various glass-frc formulations. The model was fitted to a very large data set of over 1100 samples which comprised new data, literature data and commercial data (Fig. 9.14). This essentially updated the work of Proctor and co-workers (Proctor et al., 1982, Litherland et al., 1981) and showed that the acceleration factors derived by them cannot be applied to modified matrix glass-frc as the activation energy G of the strength loss process is different compared with OPC glass-frc (57± 59 kJ/mol cf. 94 kJ/mol); this implies that a different degradation process is at work, which they conclude is connected to the lack of Ca(OH)2 availability in modified matrices. In fact, using Proctor and co-workers factors to validate modified matrix glass-frc can overestimate durability by almost an order of magnitude at 60ëC (Table 9.1). The model can also be used to predict `mean ductile life’, i.e. the time between manufacture and the fibre strength being depleted to the point where all region II and III behaviour (Fig. 9.2) is lost. The ductile life is dependent on the ratio of the first crack strength to the initial strength, which in term depends on the fibre content and the service temperature, but for typical modern grc was predicted as ~60 years for OPC-glass-frc and ~80 years for metakaolin and/or sulpho-aluminate modified matrix glass-frc (Purnell and Beddows, 2005). 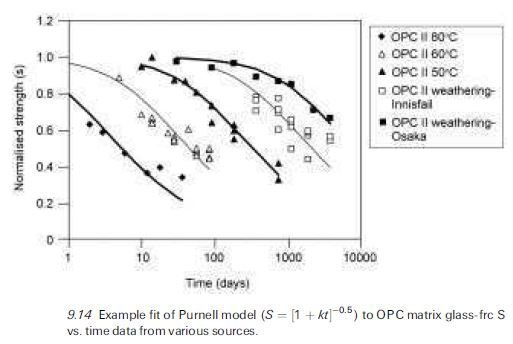 The model of Orlowsky and co-workers (Orlowsky et al., 2005, Orlowsky and Raupach, 2005, Orlowsky, 2005) is partly based on the Purnell model in that FRC strength loss is assumed to be controlled by the growth of flaws, unavoidably introduced during roving manufacture and fibre processing, leading to fibre weakening. When AR-glass filaments were aged in simulated pore solutions at different temperatures and tensile strength monitored, strength loss was observed even in the absence of apparent driving forces for static fatigue (Fig. 9.15, square  dots). Thus it was concluded that degradation was caused by the growth of flaws driven by chemical attack alone and there was no driving stress. A 3-parameter model of time-dependent strength loss fl;t 1 ÿ (strength  original strength), i.e. 1 ÿ S, see equation 9.5) was advanced. Parameters required are the initial flaw depth a0, flaw extension X and the coefficients k1 and k2, which relate to the solution and diffusion controlled part of the corrosion reactions respectively: 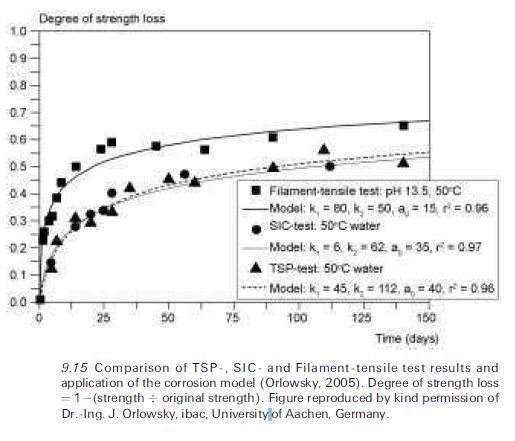 Note that equation 9.7 is an alternative form of equation 9.5 with kt  X=a0: both are based on a fracture mechanics approach that relates surface flaw growth to fibre strength loss. Figure 9.15 shows the model fitted to data from SIC and composite (TSP) specimens aged in water, and filaments aged in alkaline solution respectively at 50ëC. The modelling suggested that the rate of attack slows with time, owing to diffusion of OHÿ ions being slowed by the formation of a stable zirconium-rich inner layer and/or recondensation of silanol groups as an outer layer inhibiting further flaw growth (Orlowsky et al., 2005). This is consistent with previous work investigating the surface composition of AR-glass aged in alkaline solutions (Chakraborty et al., 1979). They also showed that there is a critical humidity (Orlowsky, 2005) ± in environments which exceed this, strength loss is related to temperature ± and developed a miniature- moisture-sensor to determine the moisture at the surface of the AR-glass inside concrete (Orlowsky et al., 2005, Orlowsky, 2005). Combining measurements from this equipment and the modelling approach above allows arbitrarily complex weathering (i.e., involving wet and dry periods) to be fully modelled. This is a promising approach.

Which of the models is `correct’ is a common topic for debate. In fact, it is more appropriate to discuss which model is most useful for a given frc type. Fibre corrosion models are less appropriate if Vf ~

Vfcrit , i.e. the composite is
designed primarily to exhibit region IV toughness (Fig. 9.2), since time- dependence of such behaviour is dominated by bond effects. Matrix densification or bond models are less appropriate if the fibre length is much longer than the critical length since little pullout will be evident regardless of age (although fibre bridging effects will still come into play). Ductile fibres are not prone to weakening via flaw growth, nor do they have problems with inclined bridging of cracks, and so neither model may be appropriate; consid- eration of ACK theory may be sufficient. It is almost certain that fibre weaken- ing and matrix densification proceed in tandem and thus the target for future research is a model that incorporates both effects. 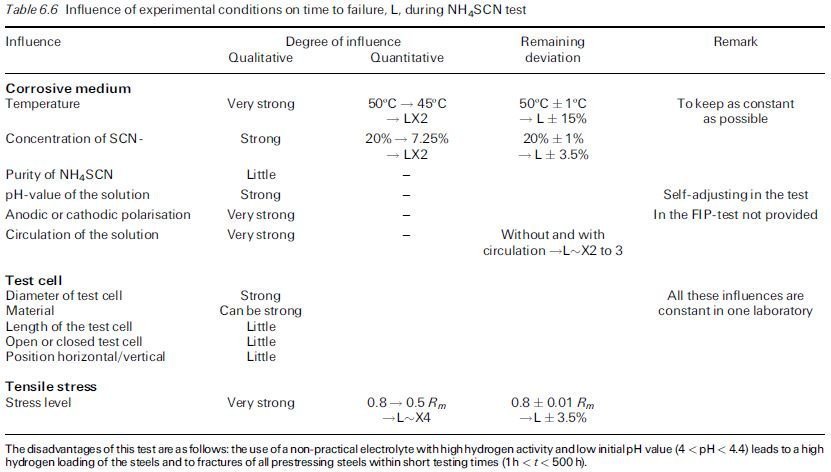