Many other chemicals, e.g. oils, fats, sugars, alkalis and salts, may attack concrete in particular circumstances. A wide range of such substances is described in Chemistry of Cement and Concrete by Lea (1970), Concrete Corrosion Concrete Protection by Biczok (1972), and in reports by Kuenning (1966) and the Portland Cement Association (2001). Detailed discussion of their various effects is beyond the scope of this chapter and only brief mention will be made here of some of the more notable examples.

Vegetable and animal oils and fats (which are esters of fatty acids with glycerol), high molecular weight (insoluble) acids (C12±C24) found in oils and fats, e.g. oleic (C17H33COOH) and stearic (C17H35COOH) acids, and glycerol can all have a destructive action on concrete. Problems can arise, therefore, in the manufacture of soap, cooking oils and fats, certain processed foods, candles, lubricating oils, etc. Some free acids are found naturally in oils and fats especially in vegetable oils but more are produced on exposure to air. Thus, more rapid attack of concrete occurs when it is exposed to air than when immersed in water. Oils and fats also react with the alkalis in concrete, a process known as saponification, to form salts of fatty acids and glycerol. The viscosity of an oil determines its degree of penetration and therefore influences the extent to which it attacks concrete. Glycerol itself dissolves lime and a solution of 2% is very destructive of immature Portland cement concrete though has little effect on well-carbonated mature concrete (Lea, 1970). It should be noted that, although most non-mineral oils can attack concrete, certain oils, such as linseed and tung oil, can be protective if applied as a surface treatment and allowed to harden by drying (oxidation).

Sugars are produced in many industries, for example as pure sugars or constituents of fruit, confectionery and other foods, drinks and wood pulp. Reaction occurs between sugars and calcium ions in the cement products to form calcium salts and cause dissolution of calcium hydroxide, C-S-H and calcium aluminate hydrates (Lea, 1970; Taylor, 1997), thus resulting in loss of strength of hardened concrete.

Petroleum fractions, such as petrol, diesel, kerosene and fuel oil, do not attack mature concrete although they strongly affect the hardening of green concrete. This also applies to mineral lubricating oils but not to those containing vegetable oils. Creosotes, on the other hand, contain some acidic substances, such as phenols, and so may attack concrete (Lea, 1970).

Dilute solutions of alkalis have little effect on Portland cement concrete but concentrated solutions (e.g. 5M) of the alkali metal hydroxides (NaOH and KOH) attack concrete, probably by decomposing hydrated aluminate phases (Taylor, 1997). Such high alkali concentrations can be generated locally around steel cathodes in cementitious materials that are exposed to long-term electro- chemical treatments at very high current densities (> 1A/m2) (Bertolini et al., 1996) and this may be related to softening of the cement matrix that has sometimes been reported to occur in the vicinity of embedded cathodes in concrete subjected to intense electrolysis (Rosa et al., 1913).

Apart from sulfates, there are several other salts which can adversely affect concrete. These include salts of strong acids with weak bases which behave as  weak acids and so have a similar effect on concrete to these acids. In addition, ion exchange can occur between the cations in the salt and those in cement.

The ammonia produced may be gradually lost from solution so that the equilibrium shifts towards further dissolution of Ca2+ ions from the cement paste. Similarly, as was noted when dealing with the effects of sulfates, mag- nesium salts are more destructive than salts of alkali metals or calcium as Mg2+ ions exchange with Ca2+ ions in cement hydrate phases forming magnesium hydroxide (brucite) and silica gel. The latter two substances slowly react to form hydrated magnesium silicate which is associated with brittleness and loss of strength (Lea, 1970; Mehta, 1985). Highly concentrated solutions of chloride salts, such as magnesium chloride, can be destructive to concrete, reacting with calcium aluminate hydrates in Portland cement concrete to form chloro- aluminate hydrates, and with CH to form expansive basic salts (Kurdowski, 2002, 2004). 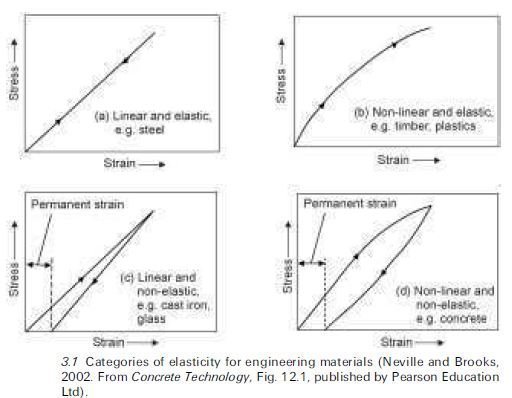