The design and analysis of some types of structure require the knowledge of volume changes in concrete members subjected to external load. In this case, Poisson’s ratio is required, viz. the ratio of lateral strain to the axial strain resulting from an axial load. Figure 3.2 shows the trends of lateral, axial and volumetric strains as the level of stress is increased up to failure. At low levels of stress, there is a lateral extension and an axial contraction so that Poisson’s ratio is approximately constant and negative, but this sign is ignored in concrete technology. As the stress approaches failure, the Poisson’s ratio increases rapidly due to vertical cracking and the volumetric strain changes from a contraction to an extension. In general, for practical levels of stress, Poisson’s ratio lies in the range of 0.15 to 0.20 when determined from strain measurements in a static modulus of elasticity test. An alternative method is to determine Poisson’s ratio by dynamic means using ultrasonic and resonant frequency tests (Neville, 1995; Neville and Brooks, 2002). In the latter case, the dynamic Poisson’s ratio is greater than that from a static test, typically ranging from 0.2 to 0.24. With both the static and dynamic methods, the measured Poisson’s ratios are elastic values. Under a sustained load, the term creep Poisson’s ratio strictly applies, but for stresses less than approximately 0.5 of the short-term strength, creep Poisson’s ratio can be assumed to be similar to the elastic value (Neville, 1995). 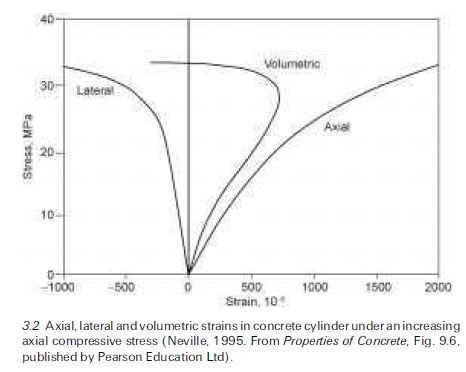 Long-term status of pore solutions in mortars and concretes, and effects of exposures to different environments