The remedial treatment of corrosion problems in reinforced concrete has become a field of major activity in recent years and there are often a great many options to be considered by engineers, when faced with the question of how to maintain a particular structure cost effectively for the remainder of its intended service life. This has led to the development of draft recommendations on repair strategies for structures damaged by corrosion, such as those formulated by a RILEM Technical Committee over a decade ago (RILEM TC 124-SRC, 1994) as a precursor to the gradual introduction of a series of new European standards on concrete repair in general (BS EN 1504, in ten parts when completed). These new standards are intended to aid those responsible for the selection of repair strategies, for specifying methods and for implementing them. A review of their applicability to structures subject to corrosion damage has been given in a BRE publication (BRE, 2000c) and a useful summary of their purposes, from the viewpoint of a consulting engineer involved in infrastructure management, has been contributed by Robery (2004). As mentioned previously, further information about the expected timetable for introduction of the new standards is also available from the website of the Concrete Repair Association (www.cra.associationhouse.org.uk).

Some of the more interesting developments in remedial methods for treating corrosion problems in reinforced concrete in recent years have involved the introduction of innovative electrochemical techniques and these will be the main focus of discussion in the remainder of this section. Before considering these techniques, however, it is worth noting that there are conventional methods of dealing effectively with carbonation-induced corrosion to produce long-lasting repairs but, when chloride-induced corrosion is involved, the situation can be far more uncertain, particularly if the structure concerned is extensively salt- contaminated. The term conventional repair is used here, as elsewhere (Bertolini et al., 2004), to indicate a process involving physical removal and replacement of non-protective concrete (i.e. carbonated or chloride-contaminated material) by a suitable cementitious material with the aim of restoring a passivating alkaline environment around the reinforcement. Other important steps, such as cleaning the exposed reinforcement after removal of the non-protective con- crete, measures to ensure adequate bond and compatibility of the repaired and non-repaired materials, application of appropriate surface treatments to the structure to improve its appearance and resistance to further ingress of corrosive agents, etc., are also required and good workmanship is always necessary.

When structures are extensively contaminated with chloride salts, it may be difficult or uneconomic to treat reinforcement corrosion effectively by the conventional approach outlined above. To do so, not only is physical removal of the already cracked and delaminated regions of the concrete a requirement, it may also prove necessary to remove substantial amounts of physically sound but chloride-contaminated material. If this is not done thoroughly, the prognosis for a durable repair will be very poor because elimination of the most intensely anodic regions of the steel (from the patched zones of the structure) simply causes new anodic regions to form in the chloride-contaminated areas that surround them (Vassie, 1984). These so-called incipient anodes, that are coupled to passive steel cathodes situated in the freshly repaired zones, are now polarised to potentials in the range where pitting can be initiated whereas they had previously been protected against pitting by the cathodic current supplied to them by the corroding steel to which they had been coupled prior to repair.

An electrochemical solution to the incipient anode problem was found when impressed current cathodic protection systems were developed for application to reinforced concrete structures suffering from chloride-induced corrosion. This approach was pioneered by Stratfull in the US (1974) and has undergone numerous adaptations over the past 30 years. Its major advantage is that it can be applied to structures with substantial levels of chloride remaining in them after repair of the cracked and delaminated regions has been undertaken. However, it requires a direct current power supply to be available, as well as an appropriate form of anode to distribute the current through the concrete to the embedded steel reinforcement and a monitoring system to enable the performance to be checked at intervals. The aim is to polarise the steel to a potential at which new pitting is suppressed and existing pit growth is at least substantially retarded or preferably arrested (see Fig. 5.16). This can generally be accomplished by applying cathodic current densities in the range < 20 mA/m2 (i.e., up to one order of magnitude higher than those needed for cathodic prevention) and adjusting them as necessary throughout the remaining service life of the structure.

A number of reviews of cathodic protection of reinforced concrete have been published in recent years (Pedeferri, 1996; Bertolini et al., 1998; Page and Sergi, 2000) and standards are available in Europe and North America (BS EN 12696, 2000; NACE RP 0290, 2000). Important areas of development have been concerned with impressed current anode systems (Wyatt, 1993), of which there are now several types suited to different applications (exemplified in Fig. 5.17). There has also been growing interest in the use of sacrificial anodes in situations where the provision of a power supply and monitoring system may be difficult, e.g. to protect the splash and tidal zones of certain marine structures (Kessler et al., 1995; Broomfield, 2000) and also to provide local control of corrosion (by cathodic prevention) in the vicinity of patch repairs (Sergi and Page, 2000; Jordan and Page, 2003).

Other electrochemical remediation techniques that are related to cathodic protection, in that they involve the application of direct current between an external anode placed (in suitable electrolytes) on the surface of the concrete and embedded reinforcing steel acting as a cathode, are known as electrochemical realkalisation (ER) and electrochemical chloride extraction (ECE) ± see Fig. 5.18. The former is aimed at restoring the alkalinity (and hence the passivating nature) of carbonated cover concrete while the latter is aimed at removing chloride ions from the cover zone of salt-contaminated concrete. An important distinction between these methods and cathodic protection is that they both involve much larger current densities (~1±2 A/m2), which are applied only temporarily, typically over about 1±2 weeks for ER and 6±10 weeks for ECE. This implies that there is no requirement for monitoring to be maintained throughout the remaining service lives of the structures concerned, but establishing acceptable criteria for the end-points for the treatments has been a matter of considerable debate. Also, particularly for ECE, the passage of high current densities over fairly long periods induces compositional changes within the cover concrete that increase progressively with the duration and magnitude of the applied current density, effects that have been studied experimentally (Bertolini et al., 1996) and by modelling (Castellote et al., 2000; Li and Page, 2000). As a consequence, the possibility of inducing adverse side-effects such as alkali-silica reaction (Page and Yu, 1995) and degradation of the steel/concrete bond (Vennesland et al., 1996; Buenfeld and Broomfield, 2000) should be considered when ECE is proposed for treatment of particular structures. A number of reviews encompassing ER and ECE have been published during the past decade (European Federation of Corrosion, 1998; Page, 2002; Bertolini et al., 2004; Polder, 2005) to which readers requiring further detailed information are directed.

During the past 10±15 years, various attempts have been made to devise alternative, cost-effective remedial measures for dealing with corrosion in reinforced concrete structures, which involve using corrosion inhibitors in treatments applied via the external surfaces of structures in which corrosion has already been initiated. This is a different matter from the use of inhibitors as concrete admixtures where their intended role is primarily to delay the onset of corrosion (as discussed in Section 5.7.2). It raises a number of questions about: (a) the ability of the inhibitors concerned to retard pre-initiated corrosion in carbonated and/or chloride contaminated concrete, (b) their ability to be trans-ported (both inwards and outwards) through concrete cover of varied quality and thickness, (c) the concentrations that need to be achieved and sustained in the vicinity of the embedded steel reinforcement to provide effective corrosion inhibition without adverse side-effects. These matters have been discussed in various reviews (Page et al., 2000; European Federation of Corrosion, 2001; BuÈchler, 2005; Bertolini et al., 2004) and laboratory research has attempted to clarify some of the issues raised for particular inhibitors (for examples, Elsener et al., 2000; Ngala et al., 2002, 2003, 2004; Tritthart, 2003; Page et al., 2002, 2005; Fedrizzi et al., 2005). In the cases of certain organic base corrosion inhibitors, efforts have also been made to develop electrochemical methods of injecting them rapidly into hardened concrete (see for example Asaro et al., 1990; Phanasgaonkar et al., 2000; Sawada et al., 2005). Such laboratory-based studies, however, have recognised limitations and there is a clear need for carefully designed and monitored site trials to be undertaken if the advantages and limitations of various corrosion inhibitors in these and other applications in the field of concrete repair are to become better understood. This could provide a useful focus for future research efforts. 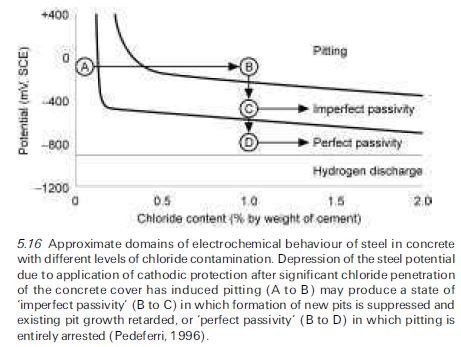 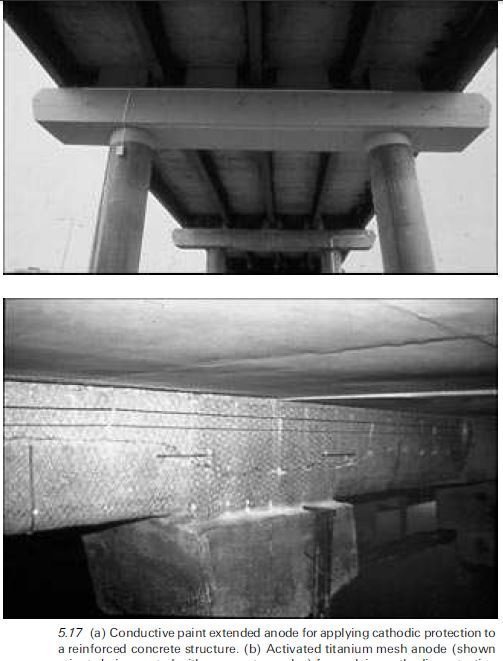 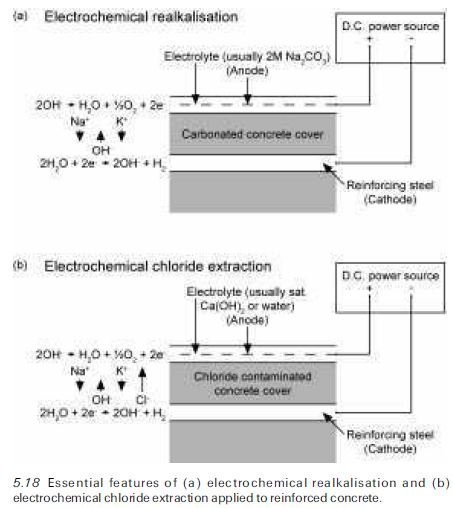 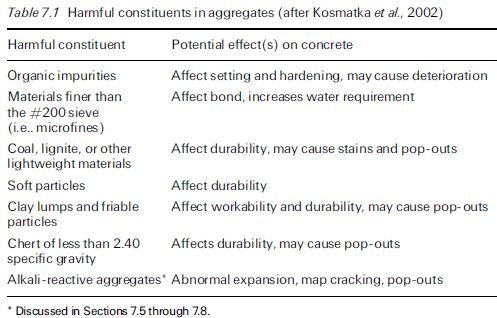 Harmful constituents and impurities in aggregates