Metallic corrosion processes in general, and the rusting of steel in particular, are by nature electrochemical. They therefore require an electrolyte, generally an aqueous solution that enables coupled anodic and cathodic reactions to occur, allowing the ions formed to migrate between the anodic and cathodic sites on the metal surface. This mechanism, which involves the transference of ions through the electrolyte in the form of `corrosion currents’, is illustrated in Fig. 5.3 for iron or steel corroding in an aqueous environment of near neutral pH value in the presence of dissolved oxygen. In this case, the primary dissolved products of the anodic and cathodic processes (Fe2+ and OHÿ ions) undergo further reactions with oxygen and water to form the loosely adherent brown deposit of hydrated ferric oxide known as rust, which is of variable composition (approximating to FeOOH). Further information on the nature and theory of metallic corrosion processes in general may be found in many relevant textbooks, of which the following are good examples (Fontana, 1986; Jones, 1992).

Since rust occupies a much larger solid volume than the iron from which it was produced, its formation can generate tensile stresses of sufficient magnitude to cause cracking and spalling if the corrosion process occurs at a significant rate within the electrolyte phase contained in the pores of a dense, brittle material such as concrete. This can eventually lead to deterioration of the sort shown in Figs 5.1 and 5.2, which represent failures of the serviceability of the structures concerned. For reinforced concrete structures, visible evidence of corrosion (rust staining and/ or cracking) is usually observable well before there is a significant risk of structural collapse although the possibility of the latter should obviously not be ignored when condition appraisal is undertaken. For prestressed concrete structures, however, the risks of sudden collapse are of much greater concern and examples of this type of problem will be dealt with separately in Chapter 6 of this volume. 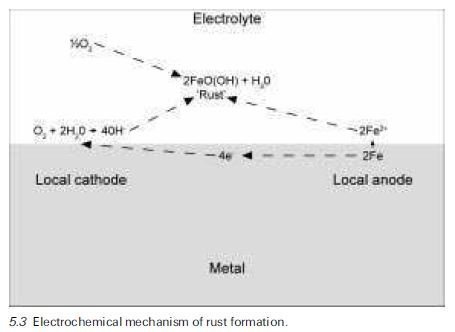