As stated previously, the resistance of an aggregate to the effects of freezing and thawing is related to its strength and to its pore size and distribution. Different ways of identifying frost susceptible aggregates have been developed in different countries and a number of these have been discussed in detail in Chapter 7 (see Section 7.3.3). In view of recent developments in European practices, however, it is relevant to note here that the European standard on aggregates for concrete, EN12620, calls up a number of tests in respect of thermal and weathering properties of aggregates. Some of these methodologies have roots in long- established tests. The primary methodologies used internationally are encompassed in standard tests such as ASTM C88, EN 1367-1 and EN 1367-2, essential features of which are outlined in this section. Many of the reference tests are based on water as a freezing medium but it is recognised that the presence of seawater or deicing agents present a more severe threat to the integrity of the material.

Other tests include those for determination of frost heave, such as British Standard BS812:Part 124. Some indication of the potential durability of aggregates used in concrete in cold climates has also been derived from the Los Angeles test, as described for example in ASTM C131 or European Standard EN 1097-2.

Standard EN 12620 emphasises the significance of petrographic examination in the first instance. Examination in accordance with Standard EN 932-3 may identify potential vulnerabilities in the form of weak or highly absorptive particles that merit physical testing. The Standard flags aggregates derived from highly weathered rocks, some conglomerates and breccias as potential examples of susceptible material.

Soundness, ASTM C88 and EN 1367-2 As noted in Chapter 7, attempts to simulate the internal expansive forces in aggregate generated by freezing are often made by tests involving cyclical immersion in saturated sulfate solutions and oven drying. Although the reliability of such tests as predictors of frost resistance is questionable, they are simple to perform and yield comparative information on the soundness of aggregate, which is estimated by determining the mass of material lost from the aggregate during the test process. The ASTM C88 test permits use of sodium sulfate or magnesium sulfate solutions, while the European test EN 1367-2 limits its scope to use of the harsher magnesium sulfate solution. The basic methodology, for example as set out in the European standard, involves sample preparation, complete immersion while contained in a basket, washing, drying and hand sieving.

The sample is typically derived from 10mm to 14mm aggregate. Sufficient material is sieved using 10mm and 14mm sieves to eliminate undersized and oversized pieces while yielding a mass of about 500 g per specimen. Two test specimens are required per test. Guidance is also provided for sample preparation in the case of smaller and larger aggregates. The aggregate is dried in an oven for 24 hours and cooled in a desiccator to room temperature. It is then sieved, washed free of dust using distilled water, oven-dried, cooled and resieved. The specimens are then transferred to mesh baskets. The mesh baskets are typically 120mm diameter and 160mm high, to accommodate the 420 to 430 g specimens with a mesh size that is coarse enough to allow free circulation of the solution but fine enough to trap the aggregate particles at the start of the test. Each period of immersion in sulfate solution is of 17 hours duration after which drainage, oven drying and cooling is conducted. Five cycles are required to complete the test to the European standard and a complete cycle requires a period of 48 hours. Problems can arise with the stability of the solutions and the standard provides for monitoring the density to ensure that it remains within specified limits during the test. The ASTM test provides for both a quantitative and qualitative examination. The European test calls for quantitative assessment with the results recorded as `magnesium sulfate values’ (MS) calculated as the percentage mass loss. The aggregates are categorised in accordance with the limits indicated in Table 8.1. The use of these categories in specification is discussed in Section 8.7.

Resistance to freezing and thawing, EN 1367-1 The potential behaviour in service of aggregate subjected to cyclical freezing and thawing may also be assessed by means of a test set out in European standard EN 1367-1. The test may be performed on single size aggregate specimens in the range 4mm to 63mm, with 8mm to 16mm being the preferred size fraction. Three test specimens are required. The test specimens are washed, dried and cooled to ambient temperature before their mass is established at the beginning of the test. The aggregates are then soaked in distilled or demineral- ised water for 24 hours using metal cans of approximate dimensions 130mm diameter and 200mm height. The aggregates in the cans are then subjected to ten freeze-thaw cycles in a temperature range of +20 C (-+3C) to -17.5C (+2c5C) to the minimum requirements of the time-temperature curve illustrated in Fig. 8.14, such that each freeze-thaw cycle can be completed within 24 hours. The mass loss is determined at the end of the cycles by wet sieving the contents of each can on a sieve that is half the lowest sieve size used in specimen preparation. The retained mass is determined after oven-drying and cooling. The mean value of mass loss of the three specimens is used to determine the `freeze- thaw value’ (F). The aggregates are categorised in accordance with the limits indicated in Table 8.2 based on the reference test method described above, using distilled or demineralised water. The use of these categories in specification is discussed in Section 8.7.

Work is in progress to establish a harsher method of test for the use of aggregates in very severe freeze-thaw exposure conditions. This would involve a similar methodology to that described in EN 1367-1 but would use a one per cent sodium chloride solution or a saturated solution of urea. 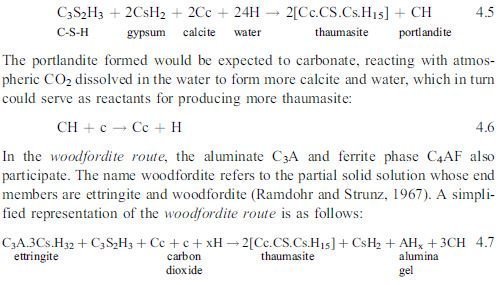 Concrete aggregates and the durability of concrete Introduction