Figure 3.18 lists the main types of crack that can occur in concrete both before hardening and after hardening. Included in the types that occur before hardening are plastic shrinkage cracks and plastic settlement cracks, which are highlighted because they will be discussed in detail later. As Fig. 3.18 shows, three categories of intrinsic cracks can occur after hardening: physical, chemical and thermal, as well as structural cracks. Drying shrinkage cracks and early-age thermal contraction cracks, which are also highlighted, will be discussed later. Table 3.1 lists the locations, causes, remedies and times of occurrence of intrinsic cracks, while examples are shown in a hypothetical structure in Fig. 3.19. It is convenient to consider the various types of intrinsic cracks as a group so as to aid diagnosis. One basis for classification is the time of occurrence, for example plastic shrinkage cracks occur during the first few hours of placing, early-age thermal cracks occur between one day and three weeks, and drying shrinkage cracks occur after several weeks. Some cracks are not necessarily dependent on time, for example crazing, while other types are related to particular conditions that may be looked upon as malpractice in the light of current knowledge, namely cracking due to alkali- silica reaction or excessive use of calcium chloride leading to corrosion of steel reinforcement.

Aspects of the mechanical behaviour of brittle matrix composites 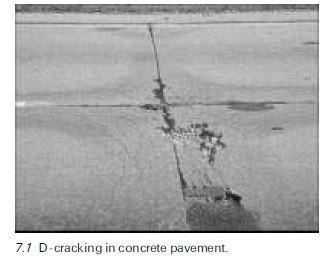