Instrumental method is the main SMZ method. Exactly it urges to solve a problem of forming earthquake intensity forecast. At the same time the calculation method, which allows to model any definite conditions of area and influence features, is often characterized by more reliability. It has great importance to soil thickness with high power. Combined usage of both methods significantly increases results validity.

It is supposed at usage of strong earthquakes records for SMZ purposes, that at some strong seismic influence the observing soil behavior is adequate to the display of their potential seismic hazard at future strong earthquakes (Nikolaev, 1965). This fact was the reason of stimulation of a number of large international scientific-research projects on organization of long-term instrumental observations with the help of powerful measurement systems in the Earth’s different regions with high seismic activity for the purpose of obtaining the strong movements of soils, which are the base of buildings and constructions (the groups SMART-1 and SMART-2 on the Taiwan island etc.).
At the same time, presence of unit record of a real strong seismic influence at its inestimable value for SMZ often can’t give the adequate forecast of soil behavior at a next following strong earthquake. This problem can be solved by creation of a number of records of seismic influences, generated by hazardous for the zoned territory active fractures, i.e. by zones of possible earthquake source (PES).

Seismic microzanation with the help of weak earthquakes records

In the connection of the fact that strong earthquakes occur seldom, the intensity increments, as a rule, are assessed by records of weak earthquakes, when a linear dependence between the dynamic stress and the deformation takes place.
Soil conditions considerably change (fig. 8) the right shape of the original undistorted signal, incident from the crystal foundation. Complex shapes of isoseisms pointed out to the undoubtful link between the earthquake display intensity and soil conditions (Reiter, 1991).

Increase of the soil thickness depth (alluvium) considerably changes the character of earthquake records (Reiter, 1991) in the process of approaching the city (fig. 8).
Calculation of intensity increment with the help of weak earthquakes is realized by the formula (Medvedev, 1962; Recommendations on SMZ, 1974, 1985): 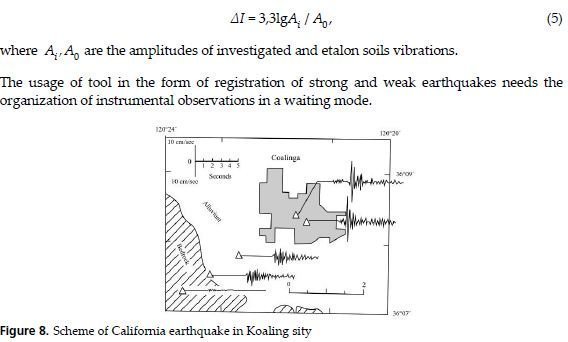 Seismic microzanation with the help of weak earthquakes records

where Ai ,A0 are the amplitudes of investigated and etalon soils vibrations.
The usage of tool in the form of registration of strong and weak earthquakes needs the organization of instrumental observations in a waiting mode.

The results of microseisms observations (Kanai, 1952) are used as subsidiary instrumental tool of SMZ. Predominant periods are determined at that in order to assess resonance properties of soils and amplitude level of microvibrations. Strictly speaking, the reference of  microseism on their origin to the purely natural phenomena is not quite correct. Numerous artificial sources, influence degree of which can’t be controlled, undoubtedly, take part in their forming along with the natural sources (fig. 8.6).

Intensity increment for strong earthquakes on microseism is calculated by the formula (Recommendations on SMZ, 1974, 1985): 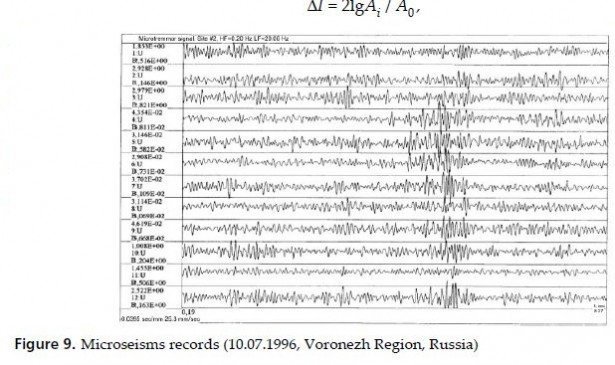 where Ai ,A0 are the maximum amplitudes of microvibrations for investigated and etalon soils.
Impossibility of the compliance of necessary standard conditions of microseism registration and large spread in values of maximum amplitudes limit the usage of microseism for calculation of soil intensity increment. The above mentioned causes the application of microseism tool only in complex with other instrumental tools.
Spectral features for different sites are estimated by means of H/V-rations (Nakamura, 1989).

The intensity increment ΔI of the soils of the zoned territory is calculated by the formula (Medvedev, 1962; Recommendations on SMZ, 1974, 1985) at usage of weaker explosions:

where Ai, A0 are vibrational amplitudes of the investigated and etalon soils.
Execution of powerful explosions on the territory of cities, settlements or near the responsible buildings is connected with large and often insurmountable obstacles (technical and ecological problems, safety problems, labouriousness and economical expediency) and practically isn’t used nowadays. This leads to the wide spreading of nonexplosive vibration sources.

The features of SMZ methods development led to the situation when the tool of elastic wave excitation with the help of low-powered sources (for example, hammer impact with m = 8– 10 kilograms) has become the most wide spread in the CIS countries, in order to determine S- and P-wave propagation velocities in soils of the typical areas of territory. Velocity values are used in order to calculate the intensity increment using the tool of seismic rigidities by S.V.Medvedev (Medvedev, 1962; Recommendations on SMZ, 1974, 1985):

where K = 1 for clay and sandy soils; К = 0,5 for large-fragmental soils (with sandyargillaceous filler not less than 30%) and strongly weathered rocks; К = 0 for largefragmental firm soils consisting of magmatic rocks (with sandy-argillaceous filler up to 30%) and weakly weathered rocks; hGL is the groundwater level.
The simplicity and immediacy of practical application of S.V.Medvedevs’ tool, which is called the tool of the “intensities”, led to its widespread in CIS countries and countries of Eastern Europe, Italy, USA, India, and Chile in 1970-es. The tool of the “intensities” was advantageously different from other tools by the immediacy, simplicity in initial data obtaining and its processing and independence from seismic regime of the territory. It to a certain extent hampered the development and making up of new tools. Unfortunately, the calculation results of predicted values of intensity increment are often quite incorrect as data of macroseismic observations of destructive earthquake consequences shows (Shteinberg, 1964, 1965, 1967; Poceski, 1969; Stoykovic and Mihailov, 1973).
By means of the special investigations it was determined that the reliability of calculated intensity increments considerably increases at usage of modern powerful impulsive energy sources (fig. 9).
The lowering of final results quality is to a certain extent caused by the fact that in the tool of “intensities” the seismic effect dependence in soils on frequency or “frequency discrimination” of soils (Shteinberg, 1965) and also the origin of typical “nonlinear effects” at strong movements isn’t taken into account. A.B.Maksimov tried to remedy this deficiency by developing the tool, where frequency peculiarities of soils were taken into account (Maksimov, 1969):

where f0, fi are predominant frequencies of etalon and investigated soils.
A.B.Maksimovs’ tool didn’t find wide distribution, as frequency differences of soil vibrations with sharply different strength properties (at usage of traditional for the seismic exploration of small depths low-powered sources) were insignificant and the calculation results on the formulas (9) and (11) were practically similar (Zaalishvili, 1986).
Intensity increment was determined by the following formula (Zaalishvili, 1986): 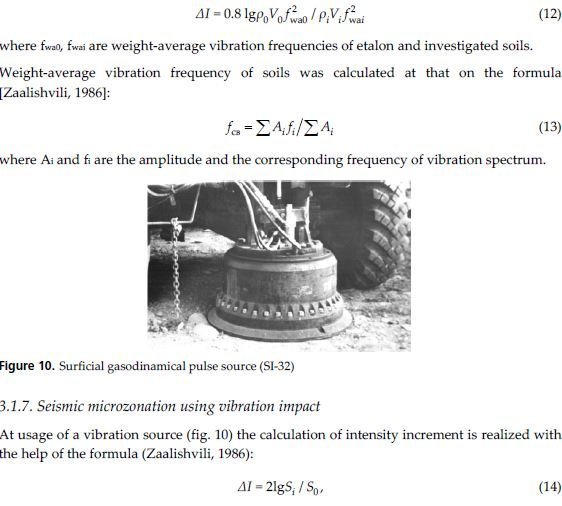 where Si and S0 are the squares of vibration spectra of investigated and etalon soils.
The developed tool was used at SMZ of the territories of cities Tbilisi, Kutaisi, Tkibuli, single areas of the Bolshoy Sochi city. The tools’ feature consists in the fact that it allows to assess soil seismic hazard without any preliminary investigations: at realization of direct measurements of soil thickness response on standard (vibration or impulse) influence. Later the formula was successfully used at SMZ of the sites of Novovoronezh Nuclear powerplant (NPP) with the help of an impulsive source (Zaalishvili, 2009). 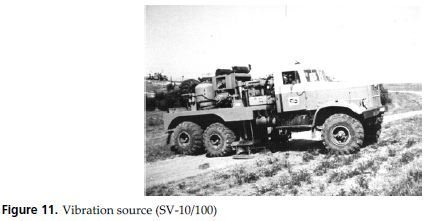 Seismic microzonation on basis of taking into account soil nonlinear properties The comparison of the absorption and nonlinearity indices with the corresponding spectra of soil vibrations shows that at higher absorption the spectrum square prevails in LF field and at high nonlinearity it prevails in HF field of the spectrum. In other words, the presence of absorption is displayed in additional spreading of LF spectrum region, and the presence of nonlinearity – in spreading of HF range.
All the mentioned allowed to obtain the formula for calculation of intensity increment on basis of taking into account nonlinear – elastic soil behavior or elastic nonlinearity (at usage of vibration source) [Zaalishvili, 1996]:

Seismic microzonation on basis of taking into account soil inelastic properties As soil liquefaction and uneven settlement of the constructions are observed at strong earthquakes (Niigata, 1966; Kobe, 1995), the most actual problem of SMZ is to assess possible soil nonelasticity adequately and physically proved at intensive seismic influences.
In order to assess directly nonelasticity of soil, the special scheme of the realization of experimental investigations (fig. 11, a) with gas-dynamic impulsive source GSK-6M (with two oscillators) was used. Selected location of the longitudinal profile allowed to influence alternately by two emitters from adjoining and somewhat far radiation zones. In the spectrum of soil vibrations, caused by near emitter, the HF component, which quickly attenuates with distance (fig. 11, b), predominates. In case of influence by distant emitter to the soil surface, the LF component predominates in the spectrum of vibrations (fig. 11, c). In other words, at nonlinear-elastic deformations the main energy is concentrated in the HF range of spectrum and at nonelastic – in the LF range. The signal spectrum has the symmetrical form in the far and practically linear-elastic zone.

Elastic linear and nonlinear vibrations are characterized for the given source by the constancy of the real spectrum square, which is the index of definite source energy value,  absorbed by soil (which is deformed by the source). The analysis of strong and destructive earthquake records and also the analysis of specially carried out experimental influences showed that at nonelastic phenomena spectra square of corresponding soil vibrations is not the constant value. It can decrease and the more it decreases, the less the soil solidity and the greater the influence value (Zaalishvili, 2009). 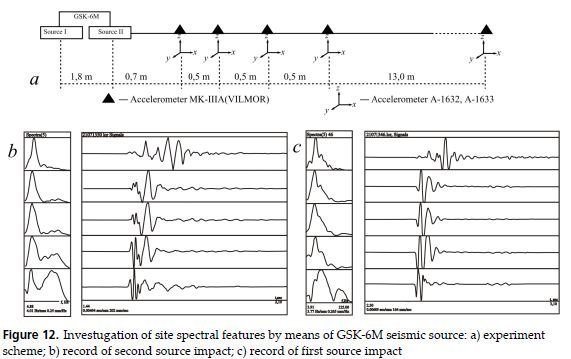 At usage of vibratory energy source, the whole number of new formulas (Zaalishvili, 2009) in order to assess soil seismic hazard with taking into account the values of their nonelasticity were obtained: 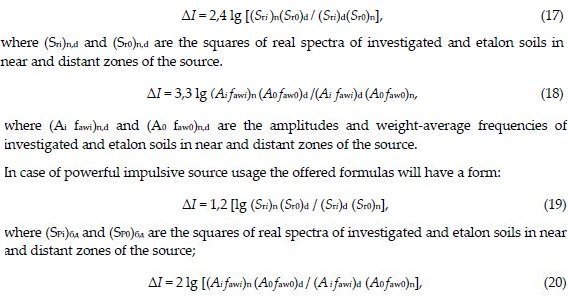 where (Ai fawi)n,d and (A0 faw0)n,d are the amplitudes and weight-average frequencies of investigated and etalon soils in near and distant zones of the source.
The formulas (17) and (18) are true only for loose dispersal soils. The formulas (17) and (18) were used at SMZ of the territory of Kutaisi city. Besides, with the help of the formulas (19) and (20) nonelastic deformation properties of soils in full-scale conditions on the site of Novovoronezh NPP-2 were defined more exactly (Zaalishvili, 2009). The formulas were obtained on basis of physical principle, which underlies the scheme, applied at the assessment of soil looseness measure (Zaalishvili, 1996, Nikolaev, 1987). 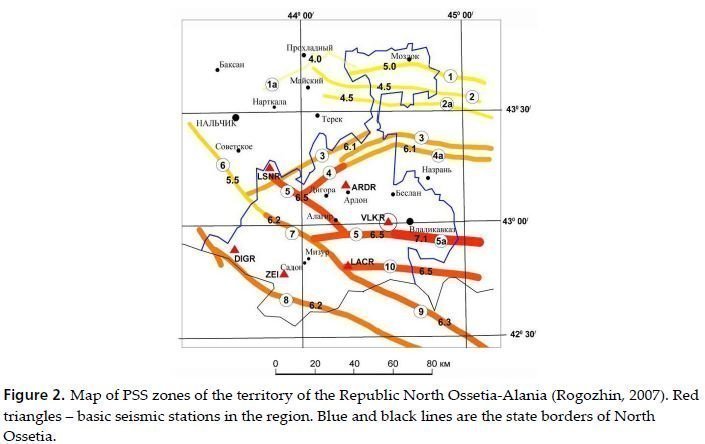