Minarets can be separate or contiguous and integral with the mosque structure, and are typically built using stone, brick, wood or reinfroced concrete. They typically include cylindrical or polygonal body/shafts, one or two balconies, and a conical roof or spire (Figure 2). In masonry minarets or slender tower structures, rather small tensile strength of mortar placed between the masonry blocks presents a major problem in regions of high seismicity. The brick or stone blocks have fairly large compressive strength, however unreinforced masonry lacks tensile strength required to resist bending moments imposed by the lateral earthquake loads. Older masonry minarets were typically constructed using stone blocks or solid clay bricks or a combination of two, whereas unreinforced lightweight stone blocks are preferred in new construction. 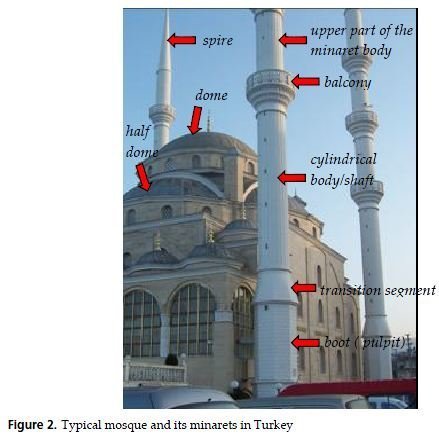 After a major earthquake in 1509, Ottoman architects tackled the problem of constructing tall earthquake resistant minarets (Oğuzmert, 2002). They started to use a special technique for linking adjacent stone blocks with iron bars and clamps in the vertical and horizontal directions as shown in Figure 3 (Doğangün et al. 2007). Use of iron clamps in the two perpendicular directions (transverse and vertical) has improved the lateral load carrying capacity of slender masonry minarets significantly under earthquake loads. The clamps and vertical bars were placed inside anchorage holes in the stone blocks, and melted lead was poured inside the hole to provide bond between the stone and iron clamp or vertical bars. Depending on the properties and dimensions of the stone units, different clamps were developed. For example, as shown in Figure 4a, curved clamps were used within the circular stone wall on the minaret perimeter. Sharper and thinner clamps in thin stone blocks (Figure 4b) and shorter clamps were used if low tensile stresses are expected (Figure 4c). Approximately 2000 kilograms of this heavy metal, lead was used for the construction of a typical masonry minaret. Lead performs as intended for a very long time because it does not corrode or is hardly ever influenced by the adverse environmental conditions.