Given the uncertainties in the estimation of the seismic hazard for eastern Canada, a number of time-history analyses were conducted using excitation motions well beyond the scenario earthquake motions for the bridge location determined from the seismic hazard analysis as discussed in Section 3.3. In total, five groups of different seismic excitations were considered.

In addition to the foregoing ensembles, ground motion records obtained during the 1988 Saguenay, Quebec earthquake, and the 1982 Miramichi, New Brunswick earthquake were used as excitation motions. Also, stochastic seismic motions generated for eastern Canada were used. 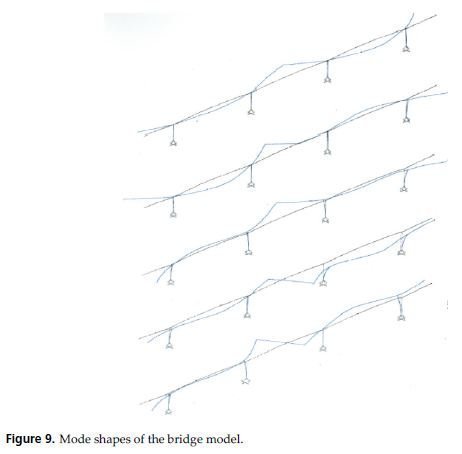 It is well known that seismic ground motions in eastern Canada are characterized by high frequency content and high A/V ratios [19, 20]. As discussed above, an ensemble of records with high A/V ratios from strong earthquakes around the world [19] was adopted for the analysis. The ensemble consisted of 13 pairs of horizontal and vertical records. The magnitudes of the earthquakes are between 5.25 to 6.9, the distances are between 4 km to 26 km. The average A/V ratio of the records is 2.06. It is necessary to mention that the magnitudes of these earthquakes cover the magnitude range of 6.0 to 6.75 of the scenario earthquakes for the short period ground motion hazard for the bridge location as discussed in Section 3.3.
The excitation motions for the time-history analysis were obtained by scaling the records to the peak ground velocity of 7.1 cm/s computed by GSC for an annual probability of exceedance of 0.00027. These excitations are referred to as high A/V excitations. Figure 10 shows the acceleration response spectra of the scaled horizontal records of the ensemble. For comparison, the design spectrum is superimposed on the figure. It can be seen that the spectra of the records exceed significantly the design spectrum for periods shorter than approximately 0.5 s, and the spectra are well below the design spectrum for periods longer than 0.5 s. 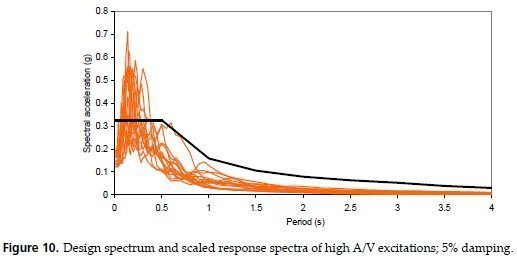 The low A/V ensemble consisted of 15 pairs of horizontal and vertical records of seismic ground motions [18]. The records were taken during strong earthquakes around the world with magnitudes ranging from 6.3 to 8.1. The distances at which the records were taken were within the range from 38 km to 469 km. The average A/V ratio of the records is 0.48. Both the magnitudes and the distances cover the magnitude and distance ranges of the scenario earthquakes for short and long period ground motion hazards for the bridge location determined from the seismic hazard analysis (see Section 3.3).

Figure 11 shows the acceleration response spectra of the horizontal records of the low A/V ensemble scaled to the peak ground velocity of 7.1 cm/s. The design spectrum is also included in the figure. It can be seen that the spectra for the low A/V records are all enveloped by the design spectrum. Given this, no time-history analyses were conducted for this ensemble.

It was of special importance for this study to investigate the performance of the bridge when subjected to seismic motions from earthquakes in eastern Canada. On November 25, 1988, an earthquake of magnitude of 5.7 occurred in the Saguenay region of the province of Quebec. This was the most significant earthquake in the past 50 years in eastern North America. Ground motion records were obtained at 16 sites at distances ranging from 43 km to 525 km [21, 22]. The response spectra for all horizontal records were scaled to the peak ground velocity for the bridge location of 7.1 cm/s and were compared with the design spectrum. Based on the comparison, 5 horizontal records and the companion vertical records were selected for the analysis. The scaled spectra of the horizontal records together with the design spectrum are shown in Fig. 12.

In 1982, several earthquakes occurred in the Miramichi region of the province of New Brunswick [23]. The epicentres of earthquakes were approximately 150 km from the bridge site. By considering the response spectra, three records representing the strongest motions during the earthquakes were selected for this study. It was found that the A/V ratios of the records are very high (about 11). Consequently, the ground motions from the Miramichi earthquakes are dominated by very short period (i.e., very high frequency) motions. The selected records were scaled to the peak ground velocity of 7.1 cm/s for the bridge location, and the scaled response spectra of the horizontal records are shown in Fig. 13. It can be seen clearly in Fig. 13 that the ground motions of the Miramich earthquakes are dominated by very short period (i.e., about 0.04 s). Figure 13 also shows that for the period of 0.04 s, the spectral acceleration for the strongest motion (i.e., record. No. 1) is approximately 9 times larger than the value of the design spectrum.

In addition to the “real” records of seismic ground motions discussed above, “simulated” acceleration time histories (i.e., accelerograms) were also used as excitation motions. As reported by [11] seismic hazard for eastern Canadian sites can be approximated using a magnitude M=6.0 event to represent the short-period hazard, and M=7.0 event to represent the long-period hazard. They simulated ground motion accelerograms for eastern Canada for M=6.0 and M=7.0, and for different distances. For each distance, four accelerograms were simulated for a probability of exceedance of 2% in 50 years (i.e., annual probability of exceedance of 0.0004). 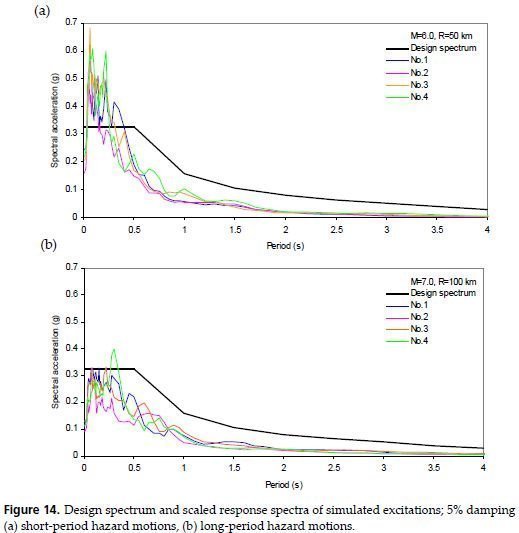 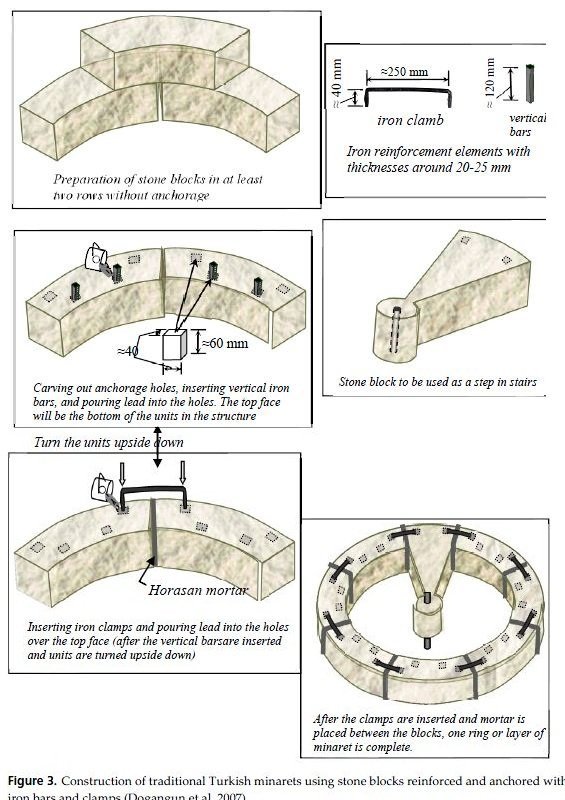 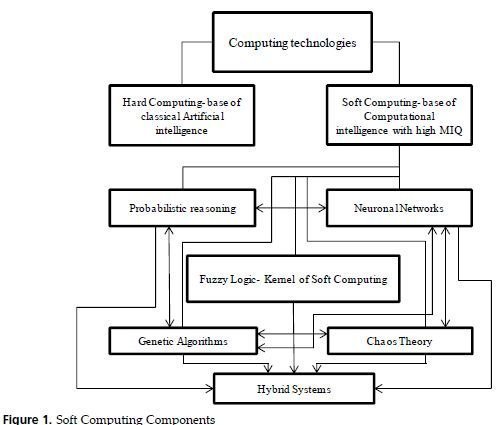