It is the customary practice to regard a foundation as shallow if the depth of the foundation is less than or equal to the width of the foundation. The different types of footings that we normally come across are given in Fig. 12.1. A foundation is an integral part of a structure. The stability of a structure depends upon the stability of the supporting soil. Two important factors that are to be considered are
1. The foundation must be stable against shear failure of the supporting soil.
2. The foundation must not settle beyond a tolerable limit to avoid damage to the structure.
The other factors that require consideration are the location and depth of the foundation. In deciding the location and depth, one has to consider the erosions due to flowing water, underground defects such as root holes, cavities, unconsolidated fills, ground water level, presence of expansive soils etc.
In selecting a type of foundation, one has to consider the functions of the structure and the load it has to carry, the subsurface condition of the soil, and the cost of the superstructure.
Design loads also play an important part in the selection of the type of foundation. The various loads that are likely to be considered are (i) dead loads, (ii) live loads, (iii) wind and earthquake forces, (iv) lateral pressures exerted by the foundation earth on the embedded structural elements, and (v) the effects of dynamic loads.
In addition to the above loads, the loads that are due to the subsoil conditions are also required to be considered. They are (i) lateral or uplift forces on the foundation elements due to high water table, (ii) swelling pressures on the foundations in expansive soils, (iii) heave pressures  on foundations in areas subjected to frost heave and (iv) negative frictional drag on piles where pile foundations are used in highly compressible soils.
Steps for the Selection of the Type of Foundation
In choosing the type of foundation, the design engineer must perform five successive steps.
1. Obtain the required information concerning the nature of the superstructure and the loads to be transmitted to the foundation.
2. Obtain the subsurface soil conditions.
3. Explore the possibility of constructing any one of the types of foundation under the existing conditions by taking into account (i) the bearing capacity of the soil to carry the required load, and (ii) the adverse effects on the structure due to differential settlements.
Eliminate in this way, the unsuitable types.
4. Once one or two types of foundation are selected on the basis of preliminary studies, make more detailed studies. These studies may require more accurate determination of loads, subsurface conditions and footing sizes. It may also be necessary to make more refined estimates of settlement in order to predict the behavior of the structure.
5. Estimate the cost of each of the promising types of foundation, and choose the type that represents the most acceptable compromise between performance and cost. 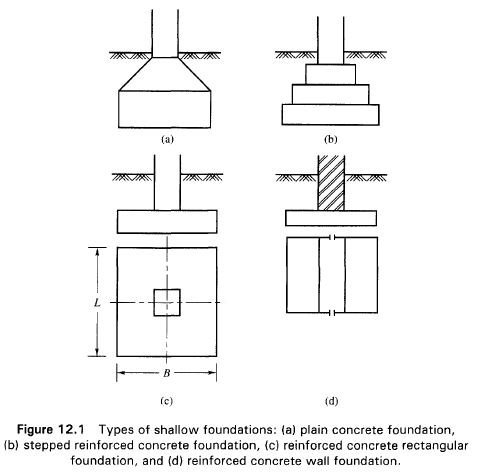