Terzaghi (1943) used the same form of equation as proposed by Prandtl (1921) and extended his theory to take into account the weight of soil and the effect of soil above the base of the foundation on the bearing capacity of soil. Terzaghi made the following assumptions for developing an equation for determining qu for a c-0 soil.
(1) The soil is semi-infinite, homogeneous and isotropic, (2) the problem is two-dimensional, (3) the base of the footing is rough, (4) the failure is by general shear, (5) the load is vertical and symmetrical, (6) the ground surface is horizontal, (7) the overburden pressure at foundation level is equivalent to a surcharge load q’0 = yD^ where y is the effective unit weight of soil, and D,, the depth of foundation less than the width B of the foundation, (8) the principle of superposition is valid, and (9) Coulomb’s law is strictly valid, that is,
Mechanism of Failure
The shapes of the failure surfaces under ultimate loading conditions are given in Fig. 12.6. The zones of plastic equilibrium represented in this figure by the area gedcfmay be subdivided into
1 . Zone I of elastic equilibrium
2. Zones II of radial shear state
3. Zones III of Rankine passive state
When load qu per unit area acting on the base of the footing of width B with a rough base is transmitted into the soil, the tendency of the soil located within zone I is to spread but this is counteracted by friction and adhesion between the soil and the base of the footing. Due to the existence of this resistance against lateral spreading, the soil located immediately beneath the base remains permanently in a state of elastic equilibrium, and the soil located within this central Zone I behaves as if it were a part of the footing and sinks with the footing under the superimposed load. The depth of this wedge shaped body of soil abc remains practically unchanged, yet the footing sinks. This process is only conceivable if the soil located just below point c moves vertically downwards. This type of movement requires that the surface of sliding cd (Fig. 12.6) through point c should start from a vertical tangent. The boundary be of the zone of radial shear bed (Zone II) is also the surface of sliding. As per the theory of plasticity, the potential surfaces of sliding in an ideal plastic material intersect each other in every point of the zone of plastic equilibrium at an angle (90° – 0). Therefore the boundary be must rise at an angle 0 to the horizontal provided the friction and adhesion between the soil and the base of the footing suffice to prevent a sliding motion at the base. 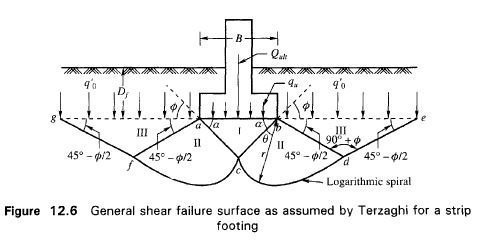 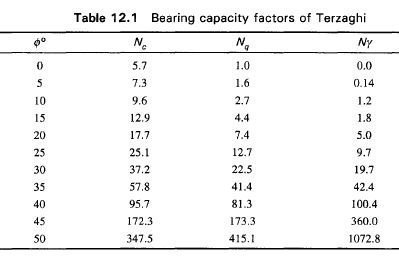 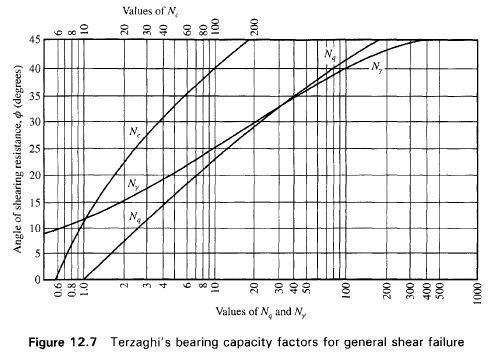 Equations for Square, Circular, and Rectangular Foundations
Terzaghi’s bearing capacity Eq. (12.6) has been modified for other types of foundations by introducing the shape factors. The equations are

Ultimate Bearing Capacity for Local Shear Failure
The reasons as to why a soil fails under local shear have been explained under Section 12.4. When
a soil fails by local shear, the actual shear parameters c and 0 are to be reduced as per Terzaghi
(1943). The lower limiting values of c and 0 are 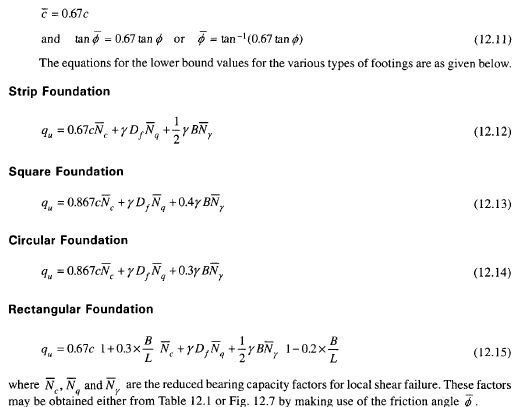 Ultimate Bearing Capacity qu in Purely Cohesionless and Cohesive Soils Under General Shear Failure
Equations for the various types of footings for (c – 0) soil under general shear failure have been given earlier. The same equations can be modified to give equations for cohesionless soil (for c = 0)
and cohesive soils (for </> = 0) as follows.
It may be noted here that for c = 0, the value of Nc = 0, and for 0=0, the value of NC = 5.7 for a strip footing and N = 1 . 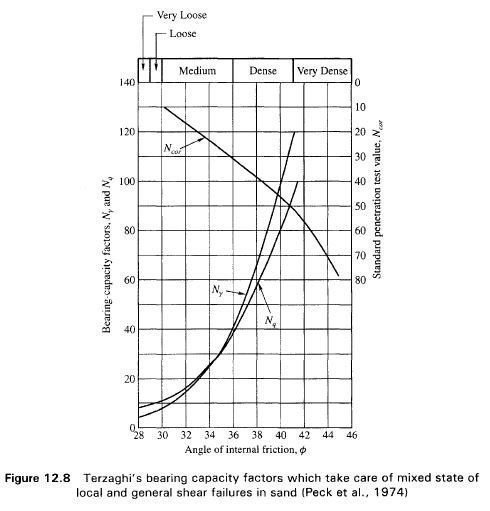 Net Ultimate Bearing Capacity and Safety Factor
The net ultimate bearing capacity qnu is defined as the pressure at the base level of the foundation in
excess of the effective overburden pressure q’Q = yD,as defined in Eq. (12.3). The net qnu for a strip
footing is

Civil Foundation Information about the author you selected