Experimental investigations have indicated that foundations on dense sand with relative density greater than 70 percent fail suddenly with pronounced peak resistance when the settlement reaches about 7 percent of the foundation width. The failure is accompanied by the appearance of failure surfaces and by considerable bulging of a sheared mass of sand as shown in Fig. 12.4(a). This type of failure is designated as general shear failure by Terzaghi (1943). Foundations on sand of relative density lying between 35 and 70 percent do not show a sudden failure. As the settlement exceeds about 8 percent of the foundation width, bulging of sand starts at the surface. At settlements of about 15 percent of foundation width, a visible boundary of sheared zones at the surface appears. However, the peak of base resistance may never be reached. This type of failure is termed local shear failure, Fig. 12.4(b), by Terzaghi (1943). 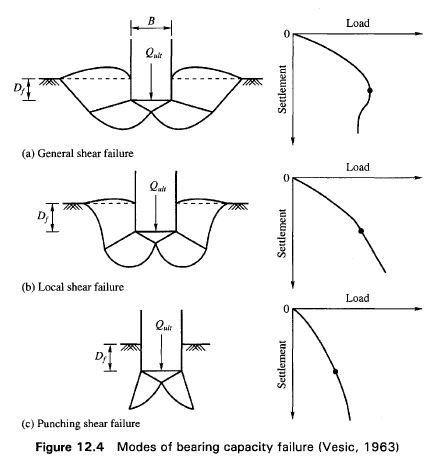 Foundations on relatively loose sand with relative density less than 35 percent penetrate into the soil without any bulging of the sand surface. The base resistance gradually increases as settlement progresses. The rate of settlement, however, increases and reaches a maximum at a settlement of about 15 to 20 percent of the foundation width. Sudden jerks or shears can be observed as soon as the settlement reaches about 6 to 8 percent of the foundation width. The failure surface, which is vertical or slightly inclined and follows the perimeter of the base, never reaches the sand surface. This type of failure is designated as punching shear failure by Vesic (1963) as shown in Fig. 12.4(c).
The three types of failure described above were observed by Vesic (1963) during tests on model footings. It may be noted here that as the relative depth/width ratio increases, the limiting relative densities at which failure types change increase. The approximate limits of types of failure to be affected as relative depth DJB, and relative density of sand, Dr, vary are shown in Fig. 12.5 (Vesic, 1963). The same figure shows that there is a critical relative depth below which only punching shear failure occurs. For circular foundations, this critical relative depth, DJB, is around 4 and for long rectangular foundations around 8.
The surfaces of failures as observed by Vesic are for concentric vertical loads. Any small amount of eccentricity in the load application changes the modes of failure and the foundation tilts in the direction of eccentricity. Tilting nearly always occurs in cases of foundation failures because of the inevitable variation in the shear strength and compressibility of the soil from one point to another and causes greater yielding on one side or another of the foundation. This throws the center of gravity of the load towards the side where yielding has occurred, thus increasing the intensity of pressure on this side followed by further tilting.
A footing founded on precompressed clays or saturated normally consolidated clays will fail in general shear if it is loaded so that no volume change can take place and fails by punching shear if the footing is founded on soft clays. 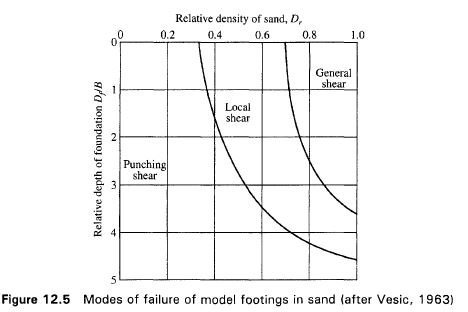 Civil Foundation Information about the author you selected