The following types of the footings are common:
(i) Isolated Column Footings: If separate footings are provided for each column, it is called isolated column footing. Figure 7.3 shows a typical isolated column footing. The size of footing is based on the area required to distribute the load of the columns safely over the soil . These footings are provided over a 100 to 150 mm bed concrete. Required reinforcements and thickness of footing are found by the design engineers. Thickness may be uniform or varying.

(ii) Combined Footings: Common footings may be provided for two columns. This type of footing is necessary when a column is very close to the boundary of the property and hence there is no scope to project footing much beyond the column face. Figure 7.4 shows a typical combined footing. The footing is to be designed for transferring loads from both columns safely to the soil. The two columns may or may not be connected by a strap beam.

(iv) Mat Footing/Raft Footing: If the load on the column is quite high (Multistorey columns) or when the SBC of soil is low, the sizes of isolated columns may work out to be to such an extent that they overlap each other. In such situation a common footing may be provided to several columns as shown in Fig. 7.6. Such footings are known as raft footings. If the beams are provided in both directions over the footing slab for connecting columns, the raft foundations may be called as grid foundation also. The added advantage of such footing is, settlement is uniform and hence unnecessary stresses are not produced. 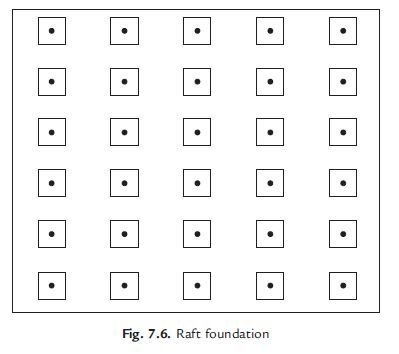