Negotiation of construction contracts can occur at two points in the process of selecting the contractor. It might be used in lieu of the tendering process. If the owner has had good experience with a certain constructor, the owner or owner’s representative can invite that one firm to prepare and offer a proposal, after which the parties negotiate the agreement, with rejections, counter-offers and other steps regarding price, scope of work and all other contract issues. If the negotiation is successful, an agreement for constructing the project is eventually signed; if it is not, another contractor may then be asked to offer a proposal and the process is repeated.

Negotiation may also be part of the formal tendering process. Open or invited tenders could be received and evaluated and the most highly ranked firms identified. Then the owner could negotiate with this ‘short list’ of, say, three firms, beginning with the top-ranked firm. Issues such as work content, schedule, price, personnel and risk sharing might be part of this negotiation. If an agreement is not reached with the top-ranked firm, negotiations proceed down the list until a satisfactory agreement emerges. This procedure is similar to that described in Chapter 3 for selecting design consultants, including initial proposals, evaluation and negotiation until a consultant agreement is reached. If the owner intends to negotiate with topranked tenderers, this intention must be made clear to all, via the invitation to tender. The contractor selection method is generally dictated by the type of delivery system and the type of contract. For example, under the ‘traditional’ design–tender–build delivery system, with a lump-sum or unit-price contract, it is likely that tenders, either open or invited, will be called.

If low price is the only criterion, there is likely to be no negotiation following evaluation of tenders, especially in the public sector. Cost-plus contracts usually involve negotiation. One example might be a contract between the owner and construction manager signed before the completion of design; negotiations would consider the fee, definitions of reimbursable costs, schedule matters, scope of services and risk and liability issues. Design–build contracts may involve either competitive proposals and evaluations or negotiation (Beard et al., 2001). Usually a fixed price is not specified at the time the design– build firm is chosen; if the contract for the project is to be fixed price, a common practice is to lock into that sum at the end of preliminary design, after 30–40% of the design work is complete (Halpin and Woodhead, 1998). Design competitions, as described in Chapter 3, are sometimes held as part of the design–build proposal process. 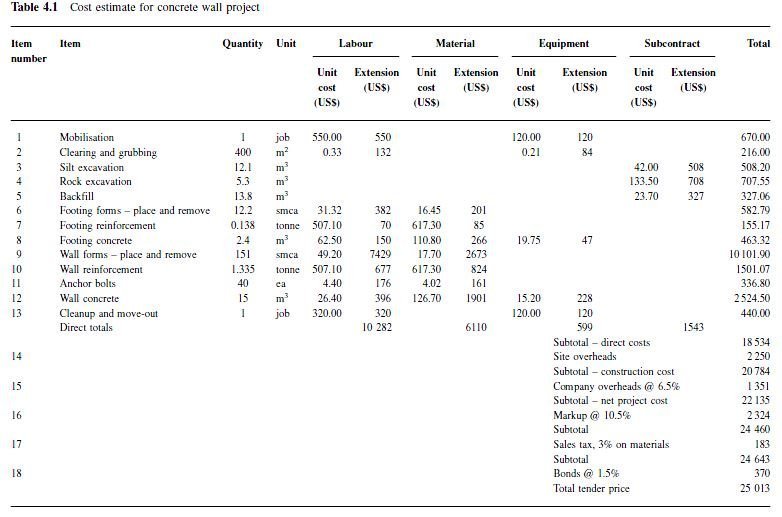