Consider a ‘project’ that will construct a cast-in-place concrete foundation wall, as shown in Figure 4.5. We desire to compile a single price for submittal to the owner for this lump-sum contract. The work will consist of mobilisation; clearing and grubbing an area of 400m2; excavating through silt and rock to a depth of 400 mm as shown and removing the excavated material from the site; placing footing forms, footing reinforcement and concrete for the 400mm wide footing; removing the footing forms; placing wall forms, wall reinforcement, anchor bolts and concrete for the 200 mm wide wall; removing wall forms; backfilling on both sides of the new wall with new gravel to the original ground level; and cleanup and move-out. Note that this is a rather ‘minimalist’ design, lacking in specification details about concrete, reinforcing, anchor bolts and backfill. First, we prepare a bill of quantities, with the result shown in the quantity and unit columns of Table 4.1. The unit measure represents the units by which the various items are measured. Mobilisation and cleanup and move-out are both measured as simply one job, with a lumpsum amount for each. The square metre (m2) and cubic metre (m3) units should require no explanation, as should the tonne (= 1000 kg) units for steel reinforcement. Anchor bolts are measured by the number of items or ‘each’. The unit smca stands for square metre of contact area, the area of contact between formwork and concrete. In the case of both footing and wall, this area is the area of the vertical formwork at the sides and ends of each. As a sample of the calculations required to determine quantities, consider the excavation quantities, as follows.

Verification of the other quantities is left to the reader. We then apply unit costs from our company database or other sources, or we develop unit costs based on a study of the operation and assumptions about productivity and costs or we apply costs from material and subcontract proposals. The result is the subtotal of US$ 18 534, as shown in Table 4.1. The two overheads are added next, site overheads of US$ 2250, the result of an analysis of supervisory, site office, utility and other expenses not shown here and company overheads stipulated by the company as 6.5% of the second subtotal or US$ 1351. The result is a net project cost of US$ 22 135. A markup of 10.5% of the net project cost (US$ 2324), sales tax on materials (US$ 183) and bond costs of 1.5% (US$ 370) complete the total tender price of US$ 25 013. Some comments on the presentation in Table 4.1 are in order. The items labelled ‘mobilisation’ and ‘cleanup and move-out’ could be considered as applying to the entire project and thus not individual work items; in that case, they would be included as part of site overheads and not shown as direct costs. Note that we intend to subcontract the excavation and backfilling work and pay for that work on a price-per-cubic-metre basis. The order in which some of the ‘add-ons’ are added is chosen by the tenderer as a matter of policy; in our example, markup is not calculated on sales tax, but sales tax could be added earlier. Also, this compilation assumes bonding costs are based on the entire amount, including markup and sales tax. The question of whether sales tax and bond costs should be classified as direct costs, overhead or markup is probably trivial. Sales tax on materials only is probably a direct cost, but if the jurisdiction extracts sales tax on the entire tender price, the tax is more on the order of an overhead cost. The order of presentation of the add-ons in Table 4.1 is typical of many such estimates. 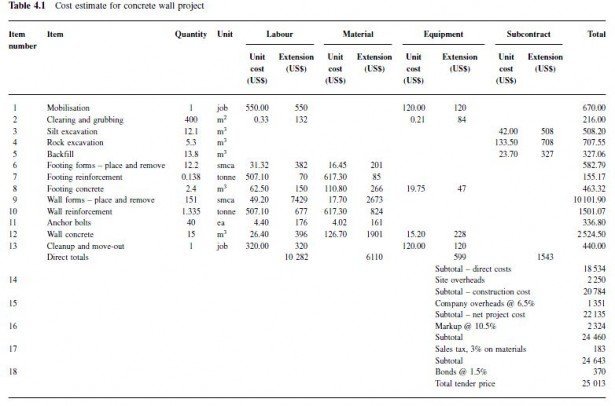