Whether ‘agency’ or ‘at risk’, construction management contracts have certain inherent advantages and disadvantages. By engaging an expert advisor early in the process, the owner can achieve a project with a near optimal balance of time, cost and quality features, due to the opportunities for review of design alternatives as they are developed. Materials and equipment with long delivery times can be identified and ordered early in the process. There may be less exposure to contract claims and litigation. A disadvantage is a lack of consistency in contractual arrangements among different projects. Furthermore, even though it is the owner’s advisor, the construction manager may tend to emphasise the traditional contractors’ interests in cost and time savings, to the detriment of high-quality construction. Even though the ‘at-risk’ construction manager enters into contracts with subcontractors, these contracts are often in the name of the owner; thus, these subcontractors may look to the owner for payment, unlike in the Figure 2.1 type of general contractor–subcontractor arrangement.

A lawsuit that arose from a construction management arrangement helps clarify the differences between ‘agency’ and ‘at-risk’ contracts (Simon, 1989). In Owen Steel Co. versus George A. Fuller Co. (563 F. Supp. 298 [S.D.N.Y. 1983]), a structural steel and metal decking subcontractor sued Fuller, the project’s construction manager, as well as the owner, for approximately US$ 1 million allegedly due. The construction manager argued successfully that it was in an agency relationship with the owner and thus was not obligated for the owner’s responsibility, based on the New York State law that precludes agents from liability for sums owed to third parties by the principal. Thus, the agent, Fuller, was not assuming any liability  under the contract and was in no way responsible for any lack of payment that existed between the subcontractor and the owner. 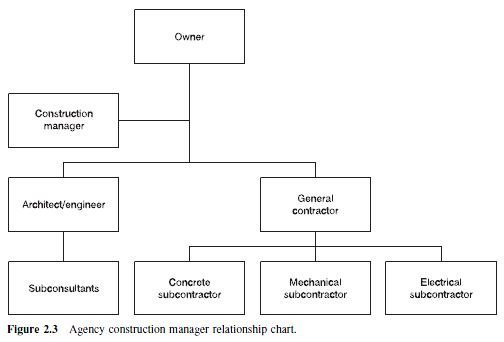 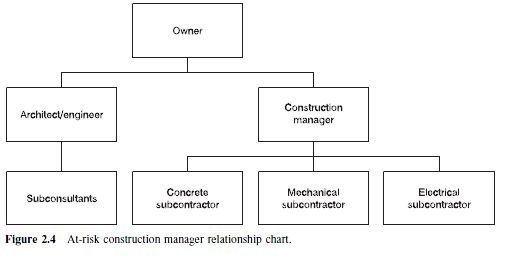 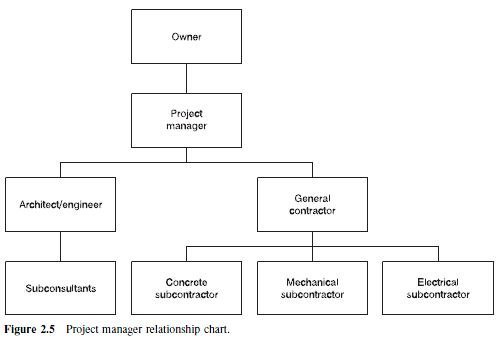