Among the first tasks to face the owner when initiating the project will be to select the primary design professional. The selection procedure outlined below can also apply to the selection of subconsultants and others on the project team, although often in a somewhat modified and simplified form. In order to obtain proposals from prospective consultants, the owner will sometimes begin by soliciting preliminary expressions of interest and qualification. Such solicitations may be made available in the local newspaper, in professional publications and newsletters and by direct mailings to previously engaged firms. They will describe the proposed project in a general way and invite responses by a fixed deadline. Response may require completion of a questionnaire outlining the consultant’s qualifications. The F´ed´eration Internationale des Ing´enieurs-Conseils (FIDIC) provides a consulting firm registration form (Hicks and Mueller, 1996) that can be filed with the F´ed´eration or used to respond to requests for expressions of interest. This form may be useful to owners as they prepare their own response requirements. For federal government projects in the USA, two questionnaire forms are required (SF 254 and SF 255), one containing general information and the other specifically related to the proposed project. These forms are excellent guides to assist consultants in defining their firms’ capabilities and describing the company’s background and the expertise of its personnel (Hicks and Mueller, 1996). After the prospective consultants express their interest, the owner selects the best suited for further consideration. These three to five firms are invited to prepare proposals. These requests for proposals contain at the least the following (F´ed´eration Internationale des Ing´enieurs- Conseils, 2001a): statement of work, areas of expertise required, time schedule, type of contract proposed, project budget, submittal date, information to be included in the proposal and expected selection date. Preparation of effective proposals is essential to the long-term health of the consulting organisation; many hundreds of hours can be expended on a single proposal. To be fair to all parties, the owner should inform proposers of the criteria that will be used to evaluate proposals.

Most design professionals believe strongly that selection should be based on qualifications rather than price (Bachner, 1991). Qualifications-based selection (QBS) uses criteria other than price to select the consultant, with the fee decided after selection; in this case, the scope of work and project definition are usually left somewhat undefined until after the consultant is selected. Fee-bidding is the term used to refer to the process in which design professionals are required to submit a proposed fee with their proposals; in this case, the owner must have prepared a clear project definition and scope statement in order for the consultant to arrive at a fee proposal. While it is recognised that all parties must eventually have an interest in the cost of design services, the fee is proposed and decided earlier in the fee bidding process than under QBS. In the USA, the federal government relies exclusively on QBS for selection of design professionals, based on legislation passed in 1972 known as the Brooks Law; most US states and many other countries use the approach for both public and private construction projects. An engineer employed by New Zealand’s Opus International Consultants reported that tenders for a certain project were evaluated by the ‘Brooks Law method’, using methodology, management skills, technical skills, track record and relevant experience as the criteria. Assuming a QBS procedure, the proposals would include such elements as the following (based in part on F´ed´eration Internationale des Ing´enieurs-Conseils, 2001a):

Firms prepare their proposals using these or similar elements as their outlines, knowing that the evaluation will be based on those criteria. The proposals are submitted and evaluated, usually by a committee from the owner’s organisation, sometimes with the help of the programme or project manager, if one has been selected by that time. Each member of the assessment committee performs an independent evaluation; a form similar to that in Table 3.1 might be used by each member, after which the results are tallied and the top candidates identified. If Table 3.1 represents the composite rating by the committee, there is a fair indication that Apex Consultants and Bergen Associates, and perhaps Design Ltd, should be dropped from further consideration. The top two or three candidates then become the shortlisted firms and interviews are held with each. Following the interviews, a top-ranked firm is identified (not necessarily Engineering International, Inc., depending upon the interviews) and negotiations are undertaken to try to reach an agreement for services. During these negotiations, the issue of an appropriate fee is considered. If these negotiations fail to reach an agreement, negotiations are held with the next-ranked firm, and so forth, until a suitable understanding is reached.

Sometimes owners require candidate firms to furnish a proposed fee along with their qualifications. At least two approaches are possible for this fee-bidding procedure mentioned earlier. Under the single-envelope system, proposers furnish all information, including the proposed fee, in a single package. The proposed fee then becomes an additional criterion to be evaluated, with its relevant weighting. As the term implies, the double-envelope system requires proposals to be separated into a package for the technical proposal and another for the fee. Under this system, the technical proposals are usually evaluated first, after which negotiations with the highest-ranked firm are held. During these discussions, that firm’s fee envelope is opened and the fee becomes a part of the negotiations. If the parties reach an agreement on all matters, all other second envelopes are returned unopened to their respective firms.

For a very large, complicated or otherwise significant project, a design competition is sometimes held. Top-ranked firms are invited to furnish proposed solutions to, say, an intricate harbour crossing, to a specified level of detail. Evaluation of these solutions becomes another step in the selection process. Owners must weigh the advantages of potentially innovative design solutions against the expense and time required to conduct the competition. Many variants of the approach described above are possible, but the steps outlined form the basis for most consultant selection procedures, especially when public funds are involved. Private owners often use less formal methods and base their selections on friendship, loyalty and previous experience, as well as cost. Like construction contracts, payments for professional design services can be determined in several ways. Clough and Sears (1994) list the following:

It is common practice to pay the designer in instalments as stages of the services are completed. Just as in the case of construction contracts, a number of standard design consultant agreement forms are available from organisations such as FIDIC (F´ed´eration Internationale des Ing´enieurs- Conseils, 2001b) and the American Institute of Architects (1997a). 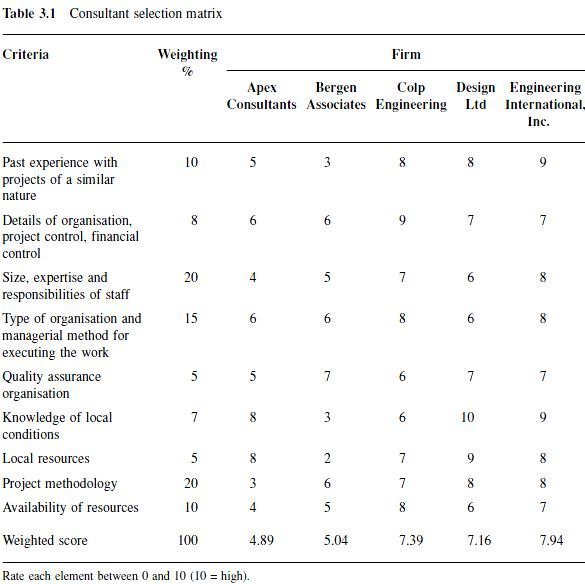 Introduction of Management of Construction