Suppose that we have a uniformly distributed load of 1050 lb/ft, applied at the level of the roof of the structure shown in Fig. 6.5. Design the lintel.

Assume fully grouted concrete masonry with a nominal thickness of 8 in., a weight of 80 lb/ft2, and a specified compressive strength of 1500 lb/in.2. Use Type S PCL mortar. The lintel has a span of 10 ft, and a total depth (height of parapet plus distance between the roof and the lintel) of 4 ft. These are shown in the schematic figure in Fig. 6.5. Assume that 700 lb/ft of the roof load is D, and the remaining 350 lb/ft is L. The governing loading combination is 1.2D + 1.6L. Our design presumes that entire height of the lintel is grouted.

First check whether the depth of the lintel is sufficient to avoid the use of shear reinforcement. Because the opening may have a movement joint on either side, again use a span equal to the clear distance, plus one-half of a half-unit on each side. So the span is 10 ft plus 8 in., or 10.67 ft.

The bars in the lintel will probably be placed in the lower part of an inverted bottom course.
The effective depth d is calculated using the minimum cover of 1.5 in.
(Sec. 1.15.4.1 of the 2008 MSJC Code), plus one-half the diameter of an assumed #8 bar.
Because this is a reinforced element, shearing capacity is calculated using Sec. 3.3.4.1.2.1 of the 2008 MSJC Code. 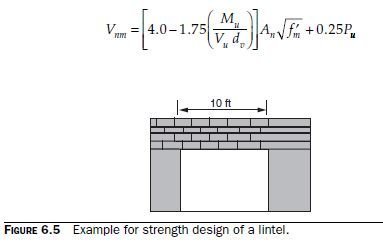 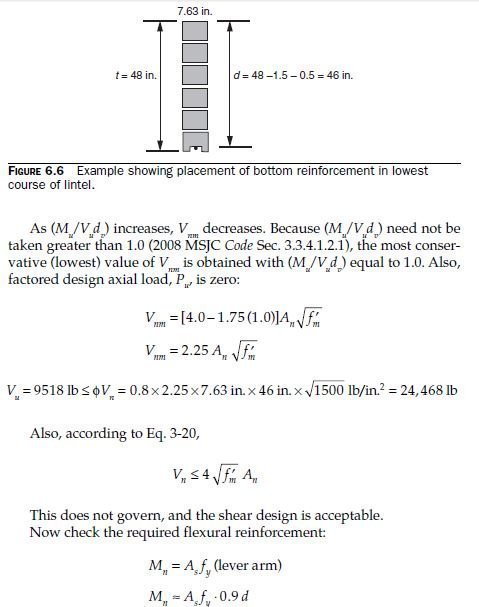 Also include two #4 bars at the level of the roof (bond beam reinforcement). The flexural design is quite simple. Section 3.3.4.2.2.2 of the 2008 MSJC Code does require that the nominal flexural strength of a beam not be less than 1.3 times the nominal cracking capacity, calculated using the modulus of rupture from Code Sec. 3.1.8.2. In our case, the nominal cracking moment for the 4-ft deep section is 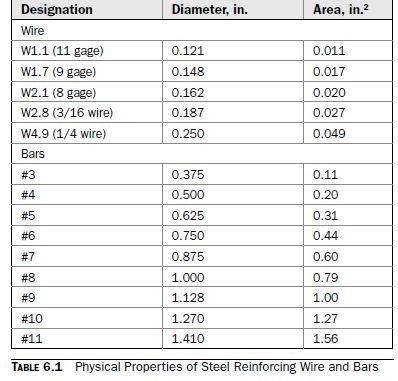 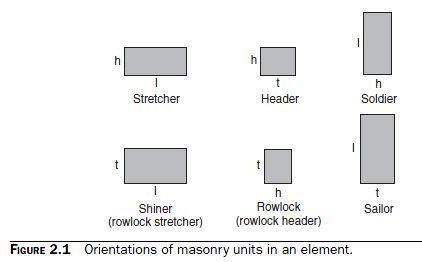