Once we have developed the moment-axial force interaction diagram by the strength approach, the actual design simply consists of verifying that the combination of factored design axial force and moment lies within the diagram of nominal axial and flexural capacity, reduced by strengthreduction factors. Consider the bearing wall designed previously as unreinforced, shown in Fig. 6.19. It has an eccentric axial load plus out-of-plane wind load of 25 lb/ft2. 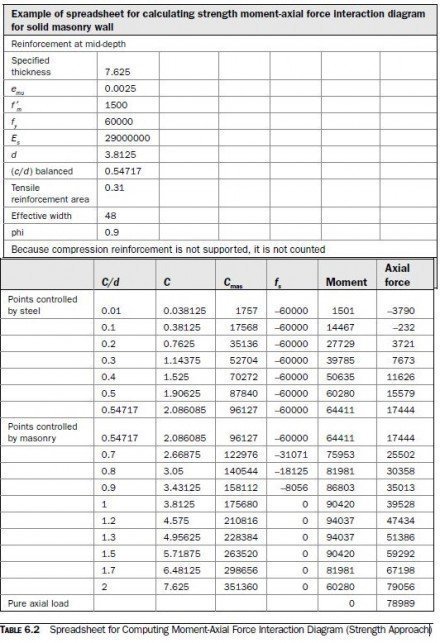 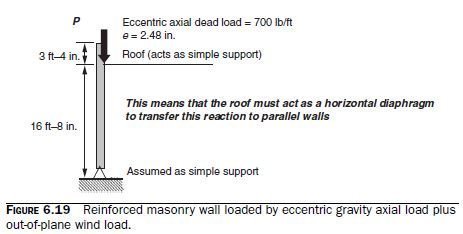 At each horizontal plane through the wall, the following condition must be met:

• Combinations of factored axial load and moment must lie within the moment-axial force interaction diagram, reduced by strengthreduction factors.

Because flexural capacity increases with increasing axial load, the critical loading combination is probably 0.9D + 1.6W. From our previous experience, we know that the critical point on the wall is at the midspan of the lower portion. Due to wind only, the unfactored moment at the base of the parapet (roof level) is

Check the adequacy of the wall with 8-in. nominal units, a specified compressive strength, fm′, of 1500 lb/in.2, and #5 bars spaced at 48 in. All design actions are calculated per foot of width of the wall.
At the mid-height of the wall, the axial force due to 0.9D is

At the mid-height of the wall, the factored design moment, Mu, is  given by

In each foot of wall, the design actions are Pu = 1134 lb and Mu = 16,124 lb-in. That combination lies within the interaction diagram of design capacities (Fig. 6.18), and the design is satisfactory.

Because this out-of-plane wall is checked for magnified moments in accordance Sec. 3.3.5.2 of the 2008 MSJC Code, the slenderness-dependant reduction factor is not applied to the moment-axial force interaction diagram.

The strength provisions of the 2008 MSJC Code also require a check of the possible effects of secondary moments for reinforced walls loaded out of plane (MSJC Code Section 3.3.5.3).

Because the cracking moment used in those equations is calculated without strength-reduction factors, it might exceed the factored design moment. Nevertheless, it is believed prudent to assume that reinforced masonry is cracked at bed joints.

For this problem, the cracked moment of inertia Icr for use in MSJC Code Sec. 3.3.5.3 is approximately and conservatively be taken as 40 percent of the gross moment of inertia. This relationship between cracked and gross inertia is commonly used for lightly reinforced concrete or masonry sections. Its use here is consistent with the assumption that the entire wall is initially cracked on the bed joints before any load is applied. Section properties are per foot of plan length.

Because the moment is changing by less than 0.04 percent, it can be assumed to have converged.

The combination of factored axial force and factored moment (including secondary moments) remains within the moment-axial force interaction diagram, and the design is still satisfactory. Finally, the strength provisions of the 2008 MSJC Code also require a check of out-of-plane deflections for reinforced walls loaded out of plane (MSJC Code Sec. 3.3.5.4).

In accordance with those sections, MSJC Code Eqs. 3-31 or 3-32 is used to calculate the mid-height deflection. Those equations are based on a member simply supported at top and bottom, which is the case here. Conservatively assuming the section to be cracked, the out-of-plane deflection is given by the converged δu2 from above (0.286 in.). That deflection is less than 0.007 h (equal to 0.007 times 16.67 ft, or 1.40 in.). The outof- plane deflection requirement is satisfied.