These require horizontal reinforcement placed in hollow bond-beam units, or in fully grouted cavities between wythes of solid clay masonry units. Examples of these are shown in Figs. 4.1 and 4.2, respectively. As noted in later sections dealing with the design of masonry beams and lintels, it is not necessary to use so-called “trough units” in concrete masonry; ordinary stretcher units can be used if supported by a shoring board.

How Reinforcement Is Used in Masonry Curtain Walls

Masonry curtain walls are normally single-wythe, made of clay masonry units. Reinforcement is oriented horizontally and is placed in bed joints. The reinforcement can be bed-joint reinforcement or smooth (No. 2) bars. Deformed bars cannot be used because the outer diameter of their deformations normally exceeds the specified width of a bed joint (3/8 in.). Also, the MSJC Code (2008a) requires that deformed reinforcement be surrounded by grout.

How Reinforcement Is Used in Masonry Walls

In other countries (but rarely in the United States), masonry walls laid with solid units are reinforced by continuous horizontal and vertical elements of reinforced concrete. This type of masonry is sometimes referred to as “confined masonry.” 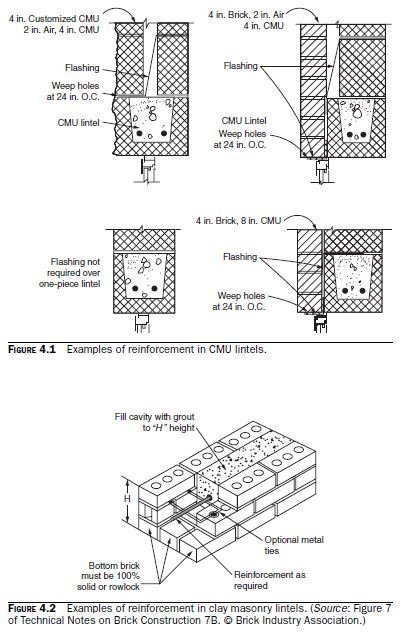 How Reinforcement Is Used in Masonry Columns and Pilasters

In the context of the MSJC Code (2008a), a column is an isolated element, meeting certain dimensional restrictions, that carries axial load and moment. A pilaster is an element that forms part of a wall, and projects out from the plane of the wall. Masonry columns and pilasters can be made with solid units or hollow units. If solid units are used, they are formed to make a box. A cage of reinforcement is placed in the box, which is then filled with grout or concrete. In such applications, the solid masonry units are essentially used as stay-in-place cover and formwork with structural function. If hollow units are used, they are laid in an overlapping pattern. Reinforcement is placed in the cells, which are then filled with grout. Examples of the placement of hollow units to form pilasters are shown in Fig. 4.4

As we have discussed, “unreinforced masonry” may actually have reinforcement in it, but is designed ignoring the structural action of that reinforcement. Nominal reinforcement is placed at corners, around openings, and in bond beams at the tops of walls, primarily for general structural integrity.

Whenever reinforcement is considered in design, the masonry is in general referred to as “reinforced.” Because masonry is a regional tradition in the United States, however, some terms associated with reinforced masonry have historically meant different things in different parts of the country.

• East of Denver (approximately), masonry with bed-joint reinforcement only (such curtain wall), has historically been referred to as “partially reinforced” masonry. This term was introduced to make this type of reinforced masonry seem less intimidating to masons who were not used to using any reinforcement at all. As explained  below, this term has historically meant something completely different west of Denver.

• West of Denver, in regions where the Uniform Building Code formerly dominated, seismic resistance has traditionally been very important. After significant damage and deaths of school children in the Long Beach earthquake of 1933, masonry construction was revived only on the condition that it should be reinforced similarly to the reinforced concrete shear walls of the time. That new type of masonry construction, referred to as “reinforced masonry,” required that the combined percentage of horizontal and vertical wall reinforcement be not less than 0.002, and that the percentage of reinforcement in each single direction (horizontal and vertical) be not less than one-third of this total, or 0.0007. That is,