Engineering works such as buildings, bridges, roads, pipelines and tunnels require very precise dimensional control during their construction. Buildings must be vertical, long tunnels must end at the correct place and foundations must often be constructed in advance to accommodate prefabricated structural sections. To achieve this, surveyors are required to determine the relative positions of fixed points to high accuracy and also to establish physical markers at (or very close to) predetermined locations. These tasks are achieved using networks of so-called control points; this book aims to give the civil engineering surveyor all the necessary theoretical knowledge to set up, manage and use such networks, for the construction and monitoring of large or small engineering works. The exact way in which control networks are established and managed depends on a number of factors: 1 The size of the construction project and the accuracy required. The accuracy of each technique described in this book is explained, together with the limitations of the various assumptions used in subsequent calculations. In particular, guidance is given as to when a project is sufficiently large that the curvature of the earth must be taken into account. 2 The available equipment. As far as possible, the descriptions of surveying equipment in this book are generic and are not based on the products of any one particular manufacturer. Both GPS and ‘conventional’ surveying equipment are covered, since both are appropriate under different circumstances. 3 The country in which the work is being carried out. This book explores some topics with particular reference to the mapping system used in Great Britain; but a clear indication is also given of how the same issues are addressed in other countries, with different mapping systems and survey authorities. The tools of the engineering surveyor have changed significantly in recent years. Most notably, GPS is now the simplest and most accurate way of finding the position of any point on the surface of the earth or (more importantly) the relative positions of two or more points. However, GPS has some inherent limitations, which are explained in detail in Chapter 7. As a result, other more conventional surveying techniques must still be understood and used when appropriate. In addition, the traditional surveying tools such as levels and theodolites are now predominantly electronic and can usually record (and even observe) readings quite automatically. The descriptions in this book are largely independent of these advances, because they do not change the basic way in which the instrument works, but simply mean that readings can be taken more simply and quickly. The particular techniques for using manual instruments have also been included, for those occasions and locations where electronic instruments are not available or appropriate.

1.2 Classification of surveys
Surveys are conducted for many different purposes, which will determine the type of instruments which are used, the measurements which are taken and the subsequent processing of those measurements to produce the required results. It is useful to know the names of the principal types of survey and the nature of the work which is involved. Engineering surveys are usually classified in the following ways.

By their purpose
1 Geodetic To determine the shape of the earth or to provide an accurate framework for a big survey, whose size means that the curvature of the earth must be taken into account.
2 Topographic To produce ordinary medium-scale maps for publication and general use.
Topographic surveys record all the features of the landscape which can be shown on the scale of the map. Topographic maps are usually produced by means of aerial or satellite photogrammetry.
3 Cadastral To establish and record the boundaries of property or territory. Concerned only with those features of the landscape which are relevant to such boundaries.
4 Engineering To choose locations for, and then set out markers for, engineering construction works. Engineering surveys are concerned only with the features relevant to the task in hand.
Engineering surveyors are likely to come in contact with all these types of survey, but are less likely to have to conduct a topographic survey. For this reason, the techniques of topographic surveying are not covered in this book—for further information on this class of surveying, see Mikhail et al. (2001) and Wolf (2000).
By their scale
The scale of a survey will affect the instruments and techniques used, as well as the type of projection used to display or record the results. In a topographic survey, it will also determine the amount and type of topographic detail which is recorded.
By the type of measurements taken
1 Triangulation Finding the size and shape of a network of triangles by measuring sides and angles. Used when each station can see three or more other stations.
2 Traverse Proceeding from one point to another by ‘dead reckoning’, using measured distances and angles to calculate bearings. Used when the construction work is long and narrow, such as a motorway or tunnel.

3 Resectioning Establishing the position of a single station by measuring distances and angles to a number of other nearby stations, whose positions are already known.
4 DGPS Measuring the relative 3D positions of two stations by simultaneously recording GPS data at each one and comparing the results.
Often, a particular survey involves a hybrid of all four of these techniques.
By the equipment used
1 Tape For direct linear measurement. Cheap and robust. Still occasionally used for small detailed surveys, but now largely supplanted by laser-based distance measurement devices.
2 Compass To observe bearings. Used mainly in reconnaissance.
3 Theodolite A telescopic sight pivoted horizontally and vertically, with two graduated protractors (called ‘circles’) for measuring angles. See Figure 1.1.
4 Electromagnetic distance measurement (EDM)devices Typically used for measurements of lengths from say 5 m to 5 km, though some instruments have ranges
up to about 25 km.
5 Total station Essentially a theodolite with a built-in EDM. Total stations usually have facilities for recording and processing measurements electronically and have largely replaced conventional theodolites. 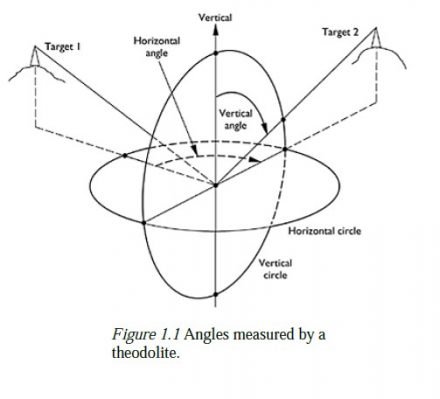 6 GPS Position fixing by satellite has almost completely replaced terrestrial triangulation for large-scale control survey and can also be useful on building sites, provided it is not set up close to buildings or trees.
7 Aerial camera photogrammetry) Mainly used in topographic surveys, but also for recording the shapes (and subsequent deformations) of buildings. See Atkinson (2001).
8 Satellite camera Essentially, a long-range aerial camera.