Some items will need measurement in the field, such as trench depths for pipelines, excavation and mass concrete to foundations, etc. This may be done by the resident engineer’s inspector who agrees the measurement with the appropriate foreman, a written advice note being sent immediately to the contractor giving the agreed figures. Sometimes joint measurement is arranged.
Other quantities can be taken from drawings if no variation has occurred.
Where an item of work is only partly done, a rough estimate of the proportion done should be agreed with the contractor. Sometimes all but a minor aspect of an item is completed, for example, final painting of valves in a valve chamber.
It is simpler to certify the item in full rather than making some trivial reduction, making a note to remind the contractor if he fails to complete the painting.
If work has been done so badly that it cannot be accepted, no payment should be certified for it. If the contractor has agreed to do some remedial work that will make it satisfactory, some partial payment can be made. All depends on the circumstances. With a reputable contractor and a responsible agent there is no reason to assume that verbal promises will not be carried out. With good contractors most agreements are verbal anyway, and any paperwork is only for the purposes of record.
Some agents leave the contractor’s quantity surveyors to prepare the contractor’s accounts. When the quantity surveyors are approached and asked not to repeat in every account items of claim previously struck out as being invalid, they may reply they have no authority to remove an item once it has been put into an account. Continued practice of this kind means that, as the measurement gets larger, the resident engineer may have to make an increasing number of corrections to items, page totals, and bill summaries. If the engineer is unable to get the practice altered – if necessary by direct approach to the contractor’s senior personnel – it at least eases the problem to insist, from the beginning, that all extras, added items and claims are billed on a separate sheet, or added at the end of each bill. 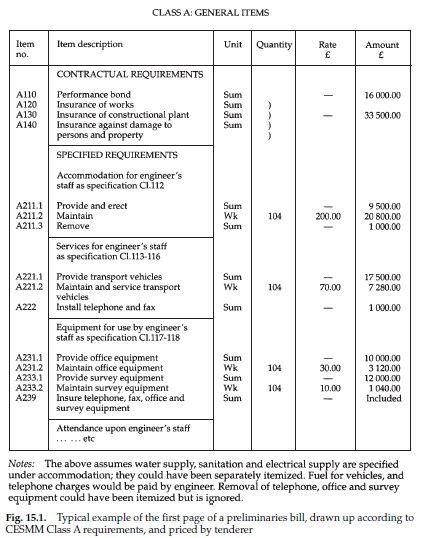 The preliminaries bill and method-related items

Roles of the key participants in a construction contract