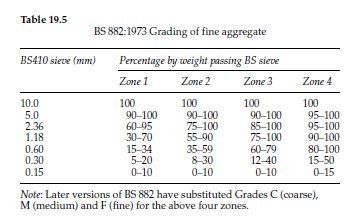 was often not procurable; and Zone 4 was usually avoided if possible because it contained too much fine material for producing the best concrete. (The revised version of BS 882 in 1983 no longer defined four Zones for fine aggregates, but substituted ‘Coarse’, ‘Medium’ and ‘Fine’ gradings which are too wide in range to be of practical use for mix design purposes.)
In practice samples of the fine and coarse aggregates proposed to be used should be sieved to find their typical grading. Sometimes it is found that the coarse aggregate contains a substantial proportion of fines (below 0.5mm), while the fine aggregate may frequently be of a uniform size. Consequently various ratios of coarse to fine aggregate must be tried out to see which gives the best mix. Envelopes of suitable grading curves for 20 and 40mm maximum size aggregate are shown in Fig. 19.3. The first trial mix can adopt a ratio of fine to coarse aggregate which, as near as possible, gives a grading approximating to the centre of the appropriate envelope shown. Adjustment of the mix proportions for subsequent trial mixes will then show whether some improvement in the quality of the mix is possible. The Design of normal concrete mixes published by the Building Research Establishment 1975 is a useful guide.