Some contracts contain a price variation clause in order to protect the contractor against the risk of rising prices due to inflation. Nowadays it is not usual for contracts in the UK lasting less than 2 years to contain such a clause.
To calculate the amount due, the contractor either has to produce evidence of how prices have altered since he submitted his tender; or a formula which uses published indices of price changes is applied to the payments due to him under billed rates.
For contracts in the UK the price indices published by the Department of the Environment, Transport and the Regions, formerly referred to as the Baxter indices and which are relevant to the civil engineering industry, can be used according to a formula. The formula applies the indices via various weightings given to labour, plant, and specific materials – in rough proportion to their use in the works being built. Standard types of formulae are included in the ICE and other forms of contract. At each interim payment the formula is applied using the latest published indices to give a multiplier representing the change in construction prices since the date of tender. This is applied to the value of the work done and certified for payment during the month. The cumulative total of these monthly additions represents the allowance for price inflation for work done to date.
Most price variation clauses provide that the price adjustment ceases for those parts of the works for which a substantial completion certificate is issued,  or for which contractual dates for completion are reached (including any extension given) – whichever is earlier. This provides an incentive for the contractor to achieve target dates.

Corrections may have to be applied if, as is often the practice, ‘interim’ indices are first published, followed later by ‘final’ values.
If no authentic indices are available for calculating price variation, as may occur on overseas projects, then price increases have to be directly calculated.
Tenderers are required to list the basic rates of wages and prices of materials on which their tender is based. Checking the authenticity of these is usually done before signing the contract. Prices of materials may have to be checked by contacting suppliers direct, asking them to confirm what their price was at the date of tender. Any wage increases charged should have some authenticity, for example, be in line with inflation of cost of living or relate to some government or state policy for equivalent labour. Wage sheets and invoices for materials have to be supplied by the contractor as work is done: these are analysed to calculate the extra costs paid by the contractor. Sundry checks have to be applied of an auditing nature, for example, that the wages shown on the pay sheets were actually paid; that suppliers were paid what their invoices said; that the quantity of materials invoiced were used on the job and not on some other job;
that invoices are not submitted twice over, etc.
In the hands of a competent and reputable contractor the checking work may be straightforward though very time consuming. Usually the engineer will draw up a construction contract which stipulates that ‘only those materials
named and priced by the tenderer will rank for price variation’, in order to limit the number of items that have to be checked. The resident engineer will need to graph out the total price increases certified against total payments for work constructed, to ensure the increases follow a consistent pattern and are believably in line with known current price trends. The work is so time consuming and open to mistake or even falsification, that every effort is usually made to adopt some simpler and more reliable measure by means of a formula even if only a limited selection of indices is available.

Claims from the contractor 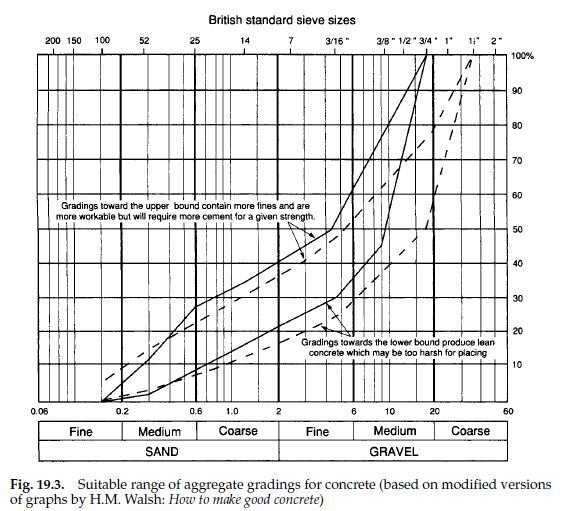 Workability of concrete and admixtures