Workability requirements for a concrete mix tend to conflict with requirements for maximum strength, density and economy, since workability increases with increased fines, cement, or water in a mix, but increased fines and water reduce density and strength, while increased cement may increase shrinkage and liability to cracking as well as adding to the cost of a mix. It is therefore necessary to produce minimum satisfactory workability in order to keep the deleterious effects of too much fines, cement or water to a minimum.
Workability can be measured by the well known slump test, but it is not
very accurate and is best used only for ensuring a given mix is consistent, 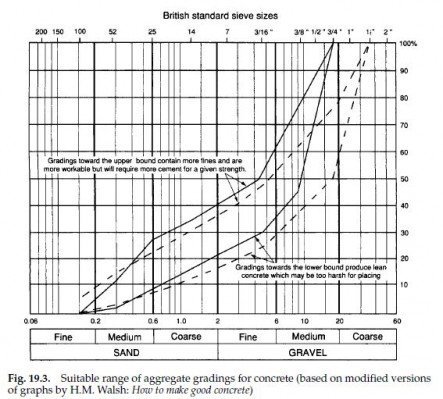 since slump varies with size and sharpness of aggregates used, as well as the amount of fines, cement and water in a mix. A truncated metal cone, 300mm high by 100 mm diameter at the top and 200 mm at the bottom, is filled in three equal layers with concrete, each being rodded with 25 strokes of a 16 mm rod, rounded at both ends. On removal of the cone the ‘slump’ or drop in level of the top of the concrete below the 300 mm height is measured. Another site test uses the compacting factor apparatus, which works on the principle of finding the weight of concrete which falls via a sequence of two hoppers into a cylinder. The ‘compacting factor’ is the ratio of the weight of concrete falling into the cylinder as compared with the weight of concrete compacted to fill it. The higher this ratio is, the more workable is the concrete.
These and other laboratory tests are described in BS 1881:1983. In practice, workability can be judged by eye as described in Section 19.6.
There is a substantial reduction of the workability of a concrete mix during the first 10 min after mixing, as anyone who has hand mixed concrete will know. This is primarily due to absorption of water by the aggregate so that the reduction in workability is less if the aggregate is wet before use. On a construction site this reduction of workability is not usually noticeable since more than 10 min usually passes before the concrete is placed. However, if samples for workability are taken, a time lapse of 10 min should be allowed before they are tested.
Admixtures to concrete are sometimes proposed by the contractor for approval, such as plasticizers or air-entraining agents to improve workability, or an accelerator to assist the contractor strike formwork early. If the specification does not define which admixtures or special cement can be used, the resident engineer should not agree to any such proposal from the contractor but pass it to the engineer for decision. There are many admixtures on the market, each having its own characteristics, some of which can be disadvantageous.
For instance the use of the accelerator calcium chloride is not permitted for steel reinforced concrete under BS 8110 because it increases the risk of corrosion of the steel. Rapid hardening cement can cause a high concrete temperature leading to shrinkage and cracking; and air entraining agents reduce the density and strength of concrete. This does not mean that no admixtures should be permitted, but that the complex reactions they can cause make it necessary to call in specialist advice to ensure their safe use in any particular case. Very high strength concrete of up to 100N/mm2 strength or more, as used in high rise buildings, etc. is obtained primarily by use of a very low water/cement ratio. As a consequence adequate workability has to be achieved by use of an admixture.
The specification must state precisely what is required.
Special aggregates for concrete usually comprise light-weight materials;
mostly used only for particular building purposes (e.g. screeds for thermal or fire insulation, etc.), or used in precast concrete products.