The handling of delay claims often poses difficulties. Under the ICE conditions Clause 44, the engineer can give an extension of time for the contract completion period if the contractor is caused unavoidable delay. The causes of delay can be numerous, including failure of the employer to give access to the site, or failure of the engineer to supply drawings as requested, or to approve the contractor’s proposed methods of construction in reasonable time, etc. But the principal causes of delay are often variation orders for extra work and the incidence of unforeseen conditions (i.e. Clause 12 claims). In addition, Clause 44 permits an extension of the contract period on account of ‘exceptional adverse weather conditions’. Clause 44 sets out the procedure to be followed which requires the contractor to give notice of the delay within 28 days of first experiencing the cause of delay or ‘as soon thereafter as is reasonable’. The contractor has to give ‘full and detailed particulars in justification of the period of extension claimed’.
Although claims for delay are usually based on extra work ordered or caused by unforeseen conditions, there can be other delays not associated with extra work, such as when the engineer instructs the contractor to delay starting some foundation construction because of the need to conduct foundation tests.
Although a delay of some kind can be caused to a contractor’s work, the delay of itself does not necessarily entitle the contractor to an extension of the contract period. The latter is a separate issue, which poses two particular difficulties:
• how to estimate the delay to the job as a whole caused by delay on just one operation (or a group of operations) when several hundred other operations are required to complete the job;
• how to estimate what extra cost, if any, is caused by the delay, over and above that which the contractor is paid for the extra work (if any) causing the delay.
The answer to the first question is illuminated by considering how critical path programming (mentioned in Section 14.5) would deal with a delay. Under that programming, if an activity lying on the critical path has its duration extended, then the delay to the whole job is likely to be equal to the activity delay. But, if the activity does not lie on the critical path, its increased duration can either have no effect on the time to complete the whole job, or it may create a new critical path, which is longer by some amount than the previous critical path.
However, if it is possible to alter the sequence in which activities are undertaken, a further critical path may emerge which may be no longer than the original one.
The engineer has to consider whether the contractor could reasonably avoid delay to the whole project by undertaking other work available; hence, mitigating the delay. Thus if the contract comprises the construction of a single building for which the ground conditions turn out so unexpectedly bad that piling of the foundations has to be added, this would justify an extension to the contract period. The view cannot be taken that construction of the building could be speeded up to compensate, because this could involve the contractor   adopting different methods for construction than he planned in his programme and might involve him in more cost. On the other hand, if there are several buildings, which the contractor has programmed to construct in sequence, and one of them is delayed by foundation problems, the contractor can divert his workforce to those not delayed, so there may be no need for an extension of the contract period.

The resident engineer’s records are vitally important when considering delay claims. It is reasonable to allow a contractor some costs of disruption when he has to change unexpectedly from one operation to another, but it is unreasonable for him to leave his men doing nothing when there is work to get on with.
Also a contractor cannot allege he is delayed by ‘late receipt of engineer’s drawings or instructions’ when he is in no position to do the work because he is behind his programme, or his plant is broken down.
With respect to ‘exceptional adverse weather’ as a cause of unavoidable delay, in the UK this usually means wet weather, including flooding, holding up crucial earthwork constructions, such as embanking and road construction. A contractor normally allows about 10 per cent time for ‘lost time’ due to weather in the UK, but this depends on the nature of the works to be constructed. It should be noted that, under ICE conditions, an extension of the contract period on account of exceptional adverse weather, does not entitle a contractor to extra payment on account of the delay; though if there are items in the bill of quantities payable per week or month, such as for the maintenance of the resident engineer’s offices, these would continue to be payable for the extended contract period.
The ECC conditions deal with weather by comparing actual weather conditions experienced on site, with the weather data supplied and set out in the contract. A ‘compensation event’ is then established if the weather conditions experienced can be shown to have a frequency of less than once in 10 years, that is, 1 in x years where x is greater than 10. As with all compensation events under the ECC this may lead to adjustment of both prices and time for completion. 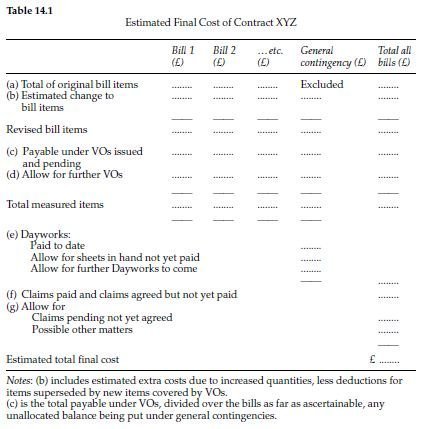