Although many contractors now use ‘ready-mix’ concrete where it is convenient and economic, there are still many projects on which concrete is mixed on site. On remote sites and sites overseas there may be no ready-mix suppliers.
If large pours are required it may be more economic for a contractor to produce concrete on site. In other cases a contractor may fear a ready-mix supplier would not be able to cope with variations in his site requirements. Traffic holdups can cause delay to delivery lorries, and create ‘bunching’ of deliveries.
No contractor likes to see a partially completed pour of concrete moving towards its initial set when no further ready-mix lorries arrive. Concrete produced on site is under his control, he can start concreting as soon as formwork is ready, and can stop concreting in an organized manner if some difficulty arises in placing. Such problems are the contractor’s but if he proposes to use ready-mix, the resident engineer should check that the supplier can meet the specified requirements for concrete. Some ready-mix suppliers, for instance, may not supply a 40 mm (1.5 in.) size coarse aggregate mix.
On the majority of construction sites the concrete used is made of natural aggregates such as gravel, sand and crushed rock mixed with water and ordinary Portland cement to BS12:1978.
For many years, concrete mixes were used as specified in BS CP114:1948, The structural use of reinforced concrete in buildings. This contained a table of recommended standard concrete mixes by weight, which is reproduced in Table 19.1 because it sets out familiar mixes still widely used for unsophisticated concrete work. In 1981, BS 5328, Methods for specifying concrete was produced.
This was later re-issued in four parts – BS 5328:1997 Part 1, Guide to specifying concrete; Part 2, Methods for specifying concrete mixes. (Parts 3 and 4 were produced in 1990, the former dealing with producing and transporting concrete, and the latter with sampling and testing concrete.) 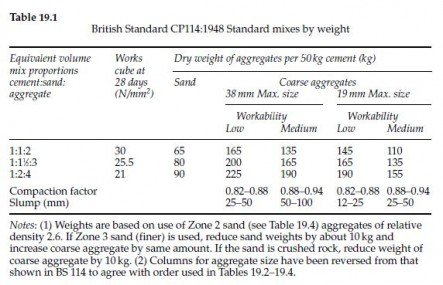 BS 5328 has been withdrawn in December 2003 and superseded by BS 8500:2002 Parts 1 and 2 which adopt the European Standard EN 206-1:2000 which is a complex, many-paged document covering many types of concrete and requirements for differing circumstances which do not need to be considered here. However, it maintains the same four categories of concrete specification as BS 5328:1997, namely – ‘designed concrete’; ‘prescribed concrete mixes’, ‘standard concrete mixes’, and ‘designated concrete’. These are described in Section 19.2.
Where a characteristic strength at 28 days is specified (as in ‘designed concrete’), it is defined as a grade, for example, ‘C.30’ where 30 represents the nominal cube strength in N/mm2. The strength is that which can be expected to be achieved with proper control of the quality of materials and the mixing.
There is also an important grade of concrete specified in BS 8007:1987, Design of concrete structures for retaining aqueous liquids. This is particularly for concrete
works associated with the water and wastewater industries, and is classed as grade C35A.
Since the production of CP 114:1948, a need for higher strength concretes, coupled with more detailed studies of the chemistry of concrete and the advantages of using different types of aggregates, cements and admixtures to meet varying conditions, has led to requiring concrete mixes to be designed to meet some specific strength together with such other requirements as are considered necessary. BS 8500 now sets out the main current requirements; while a number of other British Standards cover the use of special aggregates, special cements and additives. When any of these special ingredients are to be used, the procedures to be followed should be detailed in the specification or else provided by the engineer. In the material which follows only the ordinary matters which those on site will be expected to deal with are described.
It should be mentioned here that, in recent years there has been an increasing trend to use cement blends. These may be either Portland cement/pulverized fuel ash (PFA), OPC/PFA, or Portland cement/ground granulated blast furnace slag (GGBS), OPC/GGBS.
PFA is a residue of pulverized coal burnt in the furnaces of many modern power stations. It can be supplied to the concrete mixer as a component of a ready-blended cement, or as a separate material with its own storage and handling facilities. The advantages of the use of PFA in concrete are: overall economy of materials, improved workability and compactability, reduced water content, reduction of heat evolution, increased resistance to chemical attack (sulphate or acid). The advantage of improved workability is of considerable benefit where concrete pumping is required.
GGBS is a by-product of iron manufacture, where slag issuing from a blast furnace at a temperature of approximately 1500 degrees centigrade is rapidly quenched in water. This material is subsequently dried and ground to a fine powder which again can be supplied to the concrete mixer as a component of a ready-blended cement, for example, Portland blast furnace cement (PBFC), or as a separate material with its own storage and handling facilities. The advantages of the use of GGBS in concrete are: increased strength over the longer term (slower strength gain at first, then catching up and overtaking normal OPC concrete at 28 days and beyond), reduction in water content for equivalent cohesion, flow and compaction particularly when pumping, reduced heat evolution especially with thick sections and improved resistance to most forms of chemical attack (sulphate or acid). This is particularly advantageous in foundation works subject to sulphate attack.

Who deals with variations and claims 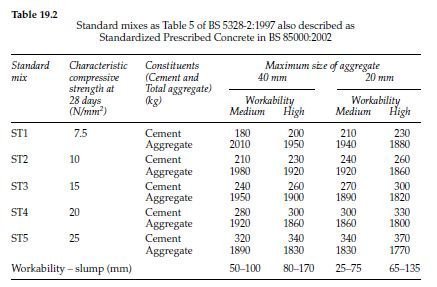