It can be seen that although designing a trial mix to meet a given grade can be done within a reasonable time using recommended minimum S values, the proving of a mix by statistical analysis of cube strengths is a lengthy business.
At least 20 batches of concrete would have to be made up (preferably 30 or more) and at least two cubes from each batch tested at 28 days. (BS 5328 requires the mean of two cubes to be taken in each case.) The statistical method is therefore mainly used to monitor concrete quality when large quantities are being placed, and is not practicable for small sites. However, BS 5328 laid down simpler criteria for concrete of grades C20 and above, namely:
• the average cube strength of four consecutive samples must exceed the desired characteristic strength by 3N/mm2;
• no single test shall be more than 3N/mm2 less than the characteristic strength.
Thus four batches tested are the minimum requirement for testing of a trial mix. As an example, a trial mix for Grade C25 characteristic strength would be satisfactory if samples from each of four batch mixes give an average strength of not less than 28N/mm2 with no single cube strength under 22N/mm2.
The specification may also set other requirements such as minimum cement content, minimum density of concrete, and minimum tensile strength under bending. BS 1881 (1981): Methods of testing concrete describes (inter alia) standard methods of sampling mixes, making and curing test specimens, density testing, and tensile testing – the latter labelled ‘determination of flexural strength’.
Cubes are usually tested in an off-site laboratory. A density test can be carried out on site provided it is defined as on ‘fresh, fully compacted concrete’ (see Section 19.8). The requirement for the flexural test is shown in Fig. 19.1. A test apparatus is simple to make on site, and the tensile strength of the concrete is easily calculated from the value of the central load which causes failure of the beam. This tensile strength is important in water retaining concrete, and can be helpful in deciding when support props can be removed from slabs and beams if the test beam is cured alongside and in the same manner as such slabs and   beams. However, a margin of safety must be allowed for possible differences in compaction between the test beam and the in situ concrete.

To keep a watch on concrete quality during construction a record of the type shown in Fig. 19.2 can be used on which are plotted 7- and 28-day concrete cube strength test results. The figure illustrates a decline in strength at 7 January, remedied later by reducing the water/cement ratio. 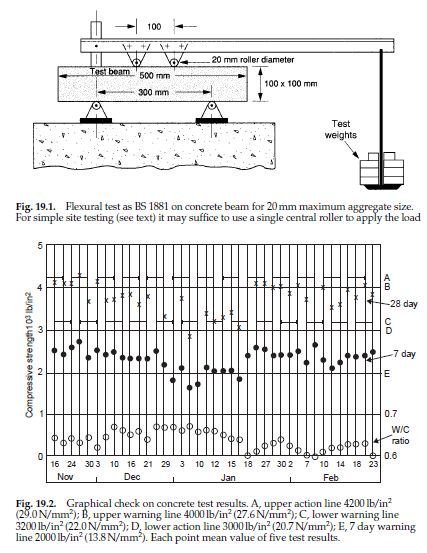 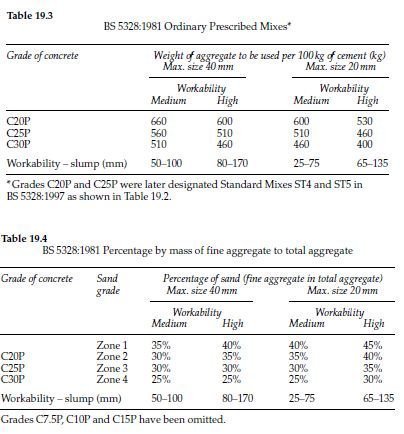