For admeasurement contracts, measurement of quantities of work done will be one of the most important tasks undertaken by the RE and his staff. Two essentials for any system are:
• it must be possible to ascertain from the records what has been measured and what has not been measured; 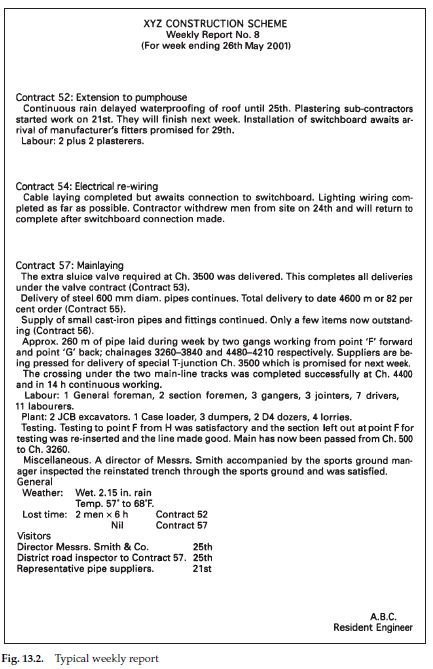 the records must clearly show what has been paid for (under interim certificates) as distinct from what has been measured.
The foregoing can be catered for by showing, in the quantities calculation book, two columns as shown in Fig. 13.3. The first column shows the total volume for part of the works; the second shows an estimate of how much has so far been certified for payment.
The measurement engineer will work from notebooks containing dimensioned sketches of the amount of work done measured by himself, or by assistant engineers and inspectors who send him notes. All these he will file, and armed with the quantities he calculates as a result, he checks the contractor’s monthly claim in detail, item by item. Where he thinks something has been mis-measured or over-claimed by the contractor he raises this with the agent – or more usually with the contractor’s quantity surveyor. Comparison of quantity measurements takes place to see where the difference might lie. If the difference is one of interpretation of how the quantity should be measured, the RE will 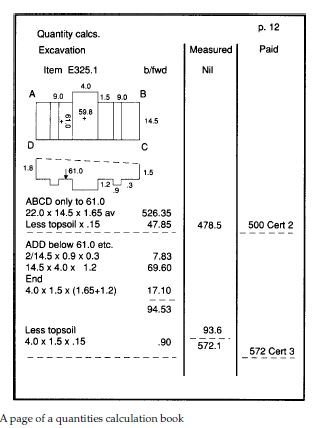 have to decide what is the correct interpretation. If the contractor wishes to argue the matter it becomes ‘a claim’, and is put in the Claims Pending file with all details attached.
The RE may raise the dispute over interpretation with the engineer’s contracts department when he sends in the contractor’s application for checking.
If the contracts department agree with the RE’s ruling, there is no further action to be taken; but if the department agrees with the contractor they may re-insert the contractor’s claimed amount or whatever the RE has advised would be the figure in that case.
Measurement sheets are best filed in ‘lever-arch’ files, in order of the Bill Items. In the early stages of the job it may not be worthwhile attempting to make any exact calculation of the quantity of an item. In that case a rough sketch is drawn on the measurement sheet, showing how an estimate of the work done has been calculated.

Sheets submitted ‘for record purposes only’