until some days after the concrete has been placed. If weak concrete appears to have been placed in a structure a difficult situation arises. The resident engineer can ask for the offending concrete to be demolished and re-built but this may pose such difficulty and delay that the decision ought not to be made on site without first discussing the problem with the engineer. The action taken depends upon how far the strength of the concrete falls short of the required strength, the load-bearing function of the under-strength concrete, and whether some alternative exists which does not involve breaking out the faulty concrete.
Frequent site checks of concrete quality can help to avoid such problems.
Section 19.6 has already indicated that the water content of a mix can easily be judged by eye; and if the quality of the aggregate stocks held on site is kept under reasonable supervision, defects arising from aggregate quality or water content are unlikely to arise. Thus it is to the batching plant, and more particularly
to the cement content, that checks should be directed.
One of the simplest on-the-spot tests which can be conducted is the density of freshly made concrete. This should be at least 2350 kg/m3 (147 lb/ ft3) for a C20 mix and 2390 kg/m3 (149 lb/ ft3) for a C30 mix on the assumption that the relative density of the aggregate is 2.65. The trial concrete mixes, however, should have revealed the typical densities expected for various grades of mix. The density can be obtained by filling and weighing an 0.015m3 (0.5 ft3) container with freshly mixed and compacted concrete. An adequately dense concrete cannot be made with badly graded aggregate or with an excess of water.
If mixing takes place on site the accuracy of the weigh-batching plant should be checked regularly. Actual errors found on a typical hand-operated weight batcher were:
• zero error on scale: up to 15 kg
• 20 mm stone: 78–106 per cent of required value
• sand: 97–125 per cent of required value
• cement (ex silo): 80–110 per cent of required value
Allowance in a mix has to be made for the weight of the moisture content of the sand which can be very variable when stocked in the open. Fig. 19.4 shows the relationship between the bulking factor and moisture content. Some devices are available for measuring the moisture content of a sand, but measuring the moisture in every batch is not a practical proposition. Instead, typical samples of sand from the stockpile under varying weather conditions can be weighed, then dried and weighed again. This gives a guide as to the weights of fine aggregate to be used under ‘dry’, ‘moist’, or ‘wet’ conditions. The moisture content of the coarse aggregate is not usually checked as it has little effect on the weight of the material.
Checking the cement content of the mix is particularly important if the cement is held in a silo. Serious under-weights of cement can occur due to machine faults with ‘automatic’ weighing equipment as well as with operator-controlled 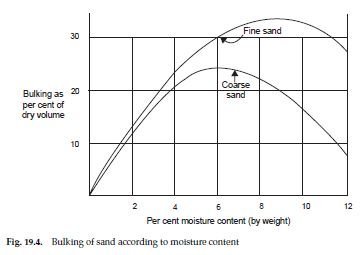 discharges from the silo. It is better if concrete batches are made up per bag or (more usually) per 2 No. 50 kg bags of cement, in which case only variations in the weight of aggregate affect the mix; but this method is only possible for relatively
modest concrete outputs, not when large pours are required. The cement content of a mix cannot be directly tested; hence the importance of keeping watch on the batching plant accuracy. It would not be unreasonable for the resident engineer to ask the contractor to conduct regular tests at suitable times on the accuracy of the batching plant. Aresponsible contractor will realize that it is better to ensure his plant is accurate, than to face the difficulty of finding that concrete placed is below the required strength.
Occasionally on small sites or overseas, volume batching of concrete is used. The weight per unit volume of aggregates has to be obtained by weighing the amount required to loosely fill a measured container. Suitable wooden gauge boxes for aggregate, sand and cement then have to be made up for a given mix. Average weights of Portland cement are 1280 kg/m3 (80 lb/ ft3) loose, or 1440 kg/m3 (90 lb/ ft3) when shaken. If hand mixing is adopted, fairly large gauge boxes with no bottom can be used, since they are placed on a mixing platform, filled and lifted off. They would usually be sized for 1 bag (50 kg) of cement. The bulking of the sand according to its moisture content has to be allowed for.