The engineer who finds himself newly appointed to take up the position of resident engineer and who has previously had little experience outside may well feel somewhat alarmed at the prospect before him. He has no doubt been told he ‘will manage all right’, but this seems small comfort as he thinks of all the things he does not know about the job and all the unknown questions likely to arise. He may also feel uneasy at the prospect of having to tell everyone what to do (instead of deciding action within a team) and may wonder how he is likely to match up to the contractor’s agent who appears a tough and forceful character considerably older than himself. However it is unlikely that problems of any engineering magnitude will be immediately encountered, for there are many organizational details to deal with first.
Work before going to site
The resident engineer should have spent some time before he goes to site examining the contract drawings and specifications, and there should have been an opportunity for him to have conversations with the designers. He should get to know how the job has been designed, so that he is able to make intelligent suggestions if the conditions revealed during the course of construction differ from those expected. He should make a file of all information which is basic to the job, such as:
• soil test data on which the design has been based;
• geological information;
• levels and benchmarks used;

• rainfall and runoff data;
• details of special materials or equipment to be incorporated in the job;
• addresses of authorities and personnel who have been written to about the job, such as the local planning authority, the district road engineer, the local building surveyor, the employer and his directors or councillors and staff;
• a brief history of how the job came about and the dates and references of major decisions.
• the pre-tender Health and Safety Plan.
The compilation of this file of data can act as a check on the situation to date.
Aseparate file of matters still outstanding is advisable. Once the resident engineer is appointed, everyone previously connected with the job will expect him to take responsibility for seeing that all site matters are done in due time. Thus the programme of construction to be agreed between the contractor and the engineer will be one of the documents carefully studied by the resident engineer, so that he can check it in detail for its consequences.
The resident engineer must make sure he has with him a final copy of the contract documents as awarded.

The resident engineer may have a choice as to where his office should be placed. If so, it should be placed so that, from it, the main traffic in and out of the site can be observed. It is a mistake to choose a situation which overlooks the job but which does not have a view of the main entrance. Little worthwhile of the job can be seen from a distance, whereas even a distant view of the entrance will enable the engineer or his staff to notice a number of happenings – the delivery of materials, plant going off site, and when callers are about to descend (especially the employer).
The office itself can range from a simple hut to a veritable barracks, according to the size of the job. On a moderate sized job where the resident engineer has two or three engineers to assist him he will need
• his own room;
• a drawing office for engineers;
• a secretary’s office and filing room;
• a washroom and toilet;
• a small kitchen area where hot drinks can be made;
• a room where wet clothes can be stripped off and hung up to dry;
• a small store room for surveying and other equipment.
On many civil engineering jobs a soils and materials testing laboratory is necessary, and this is more conveniently placed near the resident engineer’s offices than elsewhere. Outside the entrances to offices an essential item of equipment is a boot scraper, preferably with a small area of concrete with a hose-pipe water supply for cleaning gumboots.

Tags
The site office Work before going to site 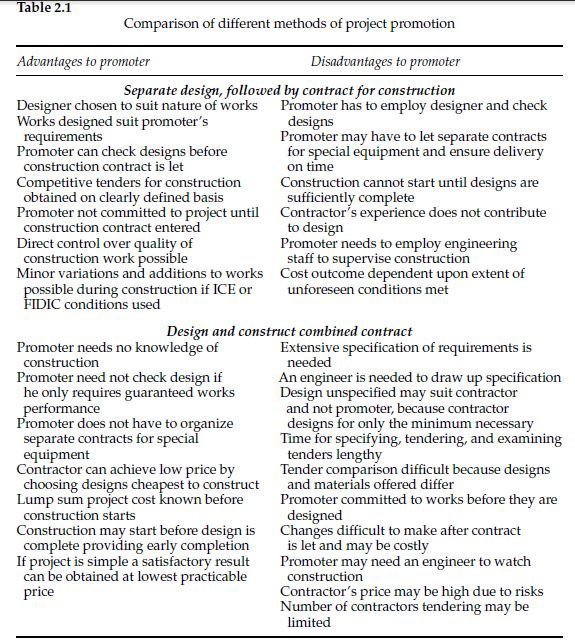 Conditions published by the International Federation of Consulting Engineers (FIDIC)

Producing an initial cost-estimate of a project