In fact, the presence of rust in bars may not have adverse impact to the bond performance and it depends on the types of bar reinforcement under consideration.
For plain round bars, the rust on bars improves the bond performance by the formation of rough surfaces which increases the friction between steel and concrete.
However, for deformed bars, the same theory cannot apply. The presence of rust impairs the bond strength because corrosion occurs at the raised ribs and subsequently fills the gap between ribs, thus evening out the original deformed shape. In essence, the bond between concrete and deformed bars originates from the mechanical lock between the raised ribs and concrete. On the contrary, the bond between concrete and plain round bars derives from the adhesion and interface friction. With such differences in mechanism in bonding, the behaviour of bond between deformed bars and plain round bars in the presence of rust varies. Reference is made to CIRIA Report 147. 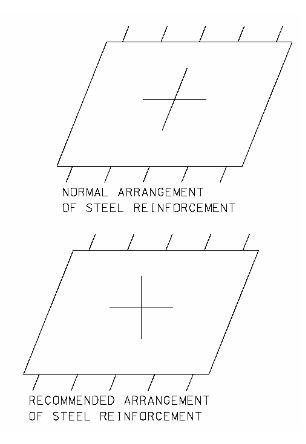 In the design of a simply supported skew bridge, which direction of reinforcement should be provided?

What are the shortcomings of grillage analysis which is commonly used in structural analysis of bridges?

What is the difference in application between open stirrups and closed stirrups in concrete beams?