In the method of stitching, it is a normal practice to construct the widening part of the bridge at first and let it stay undisturbed for several months. After that, concreting will then be carried out for the stitch between the existing deck and the new deck. In this way, the dead load of the widened part of bridge is supported by itself and loads arising from the newly constructed deck will not be transferred to the existing deck which is not designed to take up these extra loads.
One of the main concerns is the effect of stress induced by shrinkage of newly widened part of the bridge on the existing bridge. To address this problem, the widened part of the bridge is constructed a period of time (say 6-9 months) prior to stitching to the existing bridge so that shrinkage of the new bridge will take place within this period and the effect
of shrinkage stress exerted on the new bridge is minimized.
Traffic vibration on the existing bridge causes adverse effect to the freshly placed stitches.
To solve this problem, rapid hardening cement is used for the stitching concrete so as to shorten the time of setting of concrete. Moreover, the stitching work is designed to be carried out at nights of least traffic (Saturday night) and the existing bridge may even be closed for several hours (e.g. 6 hours) to let the stitching works to left undisturbed.
Sometimes, longitudinal joints are used in connecting new bridge segments to existing bridges. The main problem associated with this design is the safety concern of vehicles.
The change of frictional coefficients of bridge deck and longitudinal joints when vehicles change traffic lanes is very dangerous to the vehicles. Moreover, maintenance of longitudinal joints in bridges is quite difficult.
Note: Stitching refers to formation of a segment of bridge deck between an existing bridge and a new bridge. 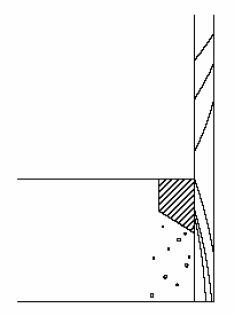 What is the function of rebate in a typical construction joint?

What are the major problems in using pumping for concreting works?

What is the advantage of sliding bearings over roller bearings?

In erection of falsework, for a rectangular panel inside a falsework should it be braced along the two diagonals?