FE method = restriction
Analyzing a structure with finite elements essentially amounts to constraining the structure (see Fig. 1.1), because the structure can only assume those shapes that can be represented by shape functions. 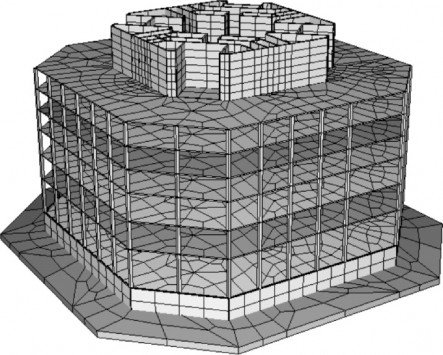 This is an important observation, because the accuracy of an FE solution depends fundamentally on how accurately a program can approximate the influence functions for stresses or displacements. Influence functions are displacements:
they are the response of a structure to certain point loads. The more flexible an FE structure is, the better it can react to such point loads, and hence the better the accuracy of the FE solution; see Fig. 1.2. 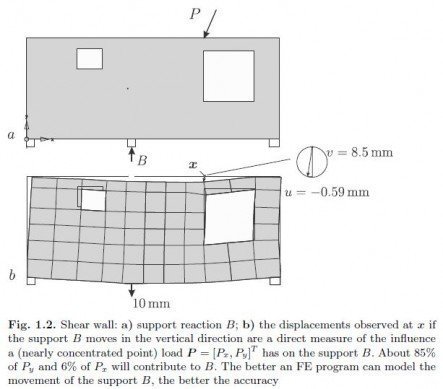 Vh contains all the deformations the FE structure can undergo. The metric applied in the projection is the strain energy: one chooses that deformation uh in Vh whose distance to the exact solution u measured in units of strain energy is a minimum.
Let u denote the exact equilibrium position of a plate (subjected to some load), and let uh be the FE approximation of this position. Now to correct the FE position, that is, to force the plate into the correct shape, a displacement field
e = u − uh must be added to uh.
Let σ^e ij and ε e^e ij denote the stresses and strains caused by this displacement field e. The FE solution guarantees that the energy needed to correct the FE solution is a minimum

FE method = energy method
An FE program thinks in terms of work and energy. Loads that contribute no work do not exist for an FE program. Nodal forces represent equivalence classes of loads. Loads that contribute the same amount of work are identical for an FE program.
In modern structural analysis, zero is replaced by vanishing work. In classical structural analysis a distributed load p(x) is identical to a second load ph(x) if at each point 0 < x < l of the beam the load is the same:

This is the weak equal sign. If all really means all then of course the weak equal
sign is identical to the strong equal sign. But in all other cases there remains
a specific difference, in that equivalence is established only with regard to a
finite set of virtual displacements δw.
Because the FE method is an energy method, problems in which the strain energy is infinite—theoretically at least—cannot be solved with this method;
see Fig. 1.4.
• FE method = method of approximate influence functions
We will see that a mesh is only as good as the influence functions that can be generated on that mesh. According to Betti’s theorem, the displacement u(x) or the stress σx(x) at a point x is the L2-scalar product of the applied load p and the corresponding influence function (Green’s function) 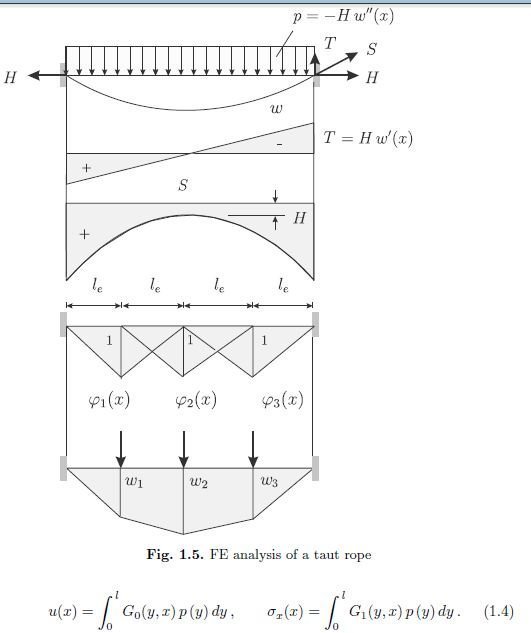