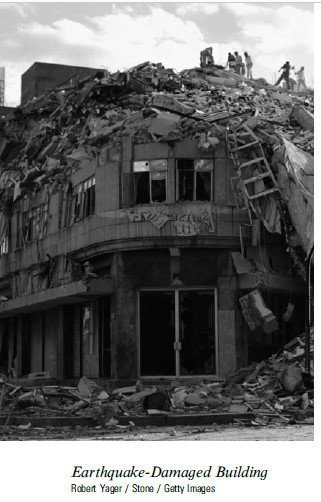 The objective of a structural engineer is to design a structure that will be able to withstand all the loads to which it is subjected while serving its intended purpose throughout its intended life span. In designing a structure, an engineer must, therefore, consider all the loads that can realistically be expected to act on the structure during its planned life span. The loads that act on common civil engineering structures can be grouped according to their nature and source into three classes: (1) dead loads due to the weight of the structural system itself and any other material permanently attached to it; (2) live loads, which are movable or moving loads due to the use of the structure; and (3) environmental loads, which are caused by environmental e¤ects, such as wind, snow, and earthquakes. In addition to estimating the magnitudes of the design loads, an engineer must also consider the possibility that some of these loads might act simultaneously on the structure. The structure is finally designed so that it will be able to withstand the most unfavorable combination of loads that is likely to occur in its lifetime. The minimum design loads and the load combinations for which the structures must be designed are usually specified in building codes. The national codes providing guidance on loads for buildings, bridges, and other structures include ASCE Standard Minimum Design Loads for Buildings and Other Structures (ASCE/SEI 7-05) [1],* Manual for Railway Engineering [26], Standard Specifications for Highway Bridges [36], and International Building Code [15]. Although the load requirements of most local building codes are generally based on those of the national codes listed herein, local codes may contain additional provisions warranted by such regional conditions as earthquakes, tornadoes, hurricanes, heavy snow, and the like. Local building codes are usually legal documents enacted to safeguard public welfare and safety, and the engineer must become thoroughly familiar with the building code for the area in which the structure is to be built. The loads described in the codes are usually based on past experience and study and are the minimum for which the various types of structures must be designed. However, the engineer must decide if the structure is to be subjected to any loads in addition to those considered by the code, and, if so, must design the structure to resist the additional loads. Remember that the engineer is ultimately responsible for the safe design of the structure. The objective of this chapter is to describe the types of loads commonly encountered in the design of structures and to introduce the basic concepts of load estimation. We first describe dead loads and then discuss live loads for buildings and bridges. We next consider the dynamic e¤ect, or the impact, of live loads. We describe environmental loads, including wind loads, snow loads, and earthquake loads. We give a brief discussion of hydrostatic and soil pressures and thermal e¤ects and conclude with a discussion about the combinations of loads used for design purposes. The material presented herein is mainly based on the ASCE Standard Minimum Design Loads for Buildings and Other Structures (ASCE/ SEI 7-05), which is commonly referred to as the ASCE 7 Standard and is perhaps the most widely used standard in practice. Since the intent here is to familiarize the reader with the general topic of loads on structures, many of the details have not been included. Needless to say, the complete provisions of the local building codes or the ASCE 7 Standard† must be followed in designing structures.

Assumptions for Analysis of Trusses