in which pf ¼ design flat-roof snow load in pounds per square foot (kN/m2); pg ¼ ground snow load in pounds per square foot (kN/m2); Ce ¼ exposure factor; Ct ¼ thermal factor; and I ¼ importance factor. In Eq. (2.7), the numerical factor 0.7, which is referred to as the basic exposure factor, accounts for the general e¤ect of wind, which is likely to blow some of the snow o¤ the roofs. The local e¤ects of wind, which depend on the particular terrain surrounding the structure and the exposure of its roof, are accounted for by the exposure factor Ce. The ASCE 7 Standard provides the values of Ce, which range from 0.7 for structures in windy areas with exposed roofs to 1.2 for structures exposed to little wind. The thermal factor, Ct, accounts for the fact that there will be more snow on the roofs of unheated structures than on those of heated ones. The values of Ct are specified as 1.0 and 1.2 for heated and unheated structures, respectively. As in the case of wind loads, the importance factor I in Eq. (2.7) accounts for hazard to human life and damage to property in the case of failure of the structure. The values of I to be used for estimating roof snow loads are given in Table 2.3. The design snow load for a sloped roof is determined by multiplying the corresponding flat-roof snow load by a slope factor Cs. Thus, 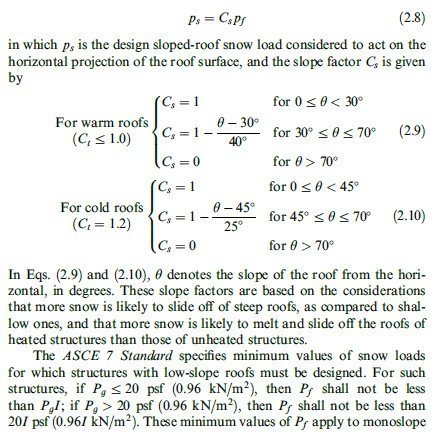 roofs with ya15, and to hip and gable roofs with y less than the larger of 2.38 and ð70=WÞ þ 0:5, where W is the horizontal distance from the eave to the ridge in feet. In some structures, the snow load acting on only a part of the roof may cause higher stresses than when the entire roof is loaded. To account for such a possibility, the ASCE 7 Standard recommends that the e¤ect of unbalanced snow loads also be considered in the design of structures. A detailed description of unbalanced snow load distributions to be considered in the design of various types of roofs can be found in the ASCE 7 Standard. For example, for gable roofs with [larger of 2.38 and ð70=WÞ þ 0:5 aya70 and W a20 ft, the ASCE 7 Standard specifies that the structures be designed to resist an unbalanced uniform load of magnitude PgI applied to the leeward side of the roof, with the windward side free of snow.

Determine the design snow loads for the roof of the gabled frame of an apartment building shown in Fig. 2.7(a). The building is located in Chicago, Illinois, where the ground snow load is 25 psf. Because of several trees near the structure, assume the exposure factor is Ce = 1. 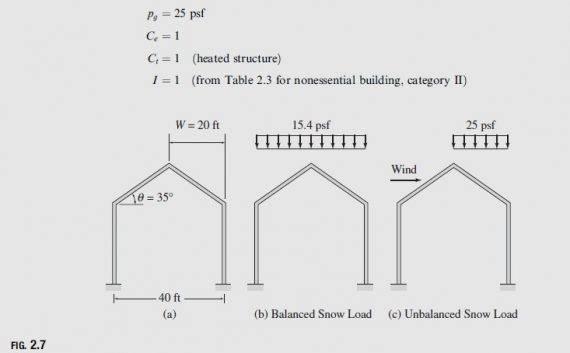 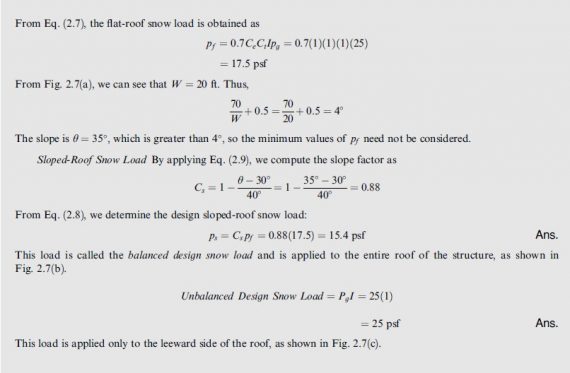