These are advantageous for long bays, especially if large clearances are desirable along the center. Such braced barrel vaults have been used for hangars, gymnasiums, and churches.
While these roofs can be supported on columns, they also can be extended to the ground, thus eliminating the need for walls (Fig. 8.30). The roofs usually are relatively lightweight, though spans are large, because they can be shaped so that load is transmitted to the foundations almost entirely by axial compressive stresses.
Designers have a choice of a wide variety of structural systems for cylindrical arches.
Basically, they may be formed with structural framing of various types and a roof deck, or they may be of stressed-skin construction.
Framing may consist of braced arch ribs (Fig. 8.30a), curved grids, or space frames.
Depending on foundation and other conditions, arch ribs may be fixed-end, single-hinged, double-hinged (pinned), or triple-hinged (statically determinate). Much lighter members can be employed for a diagonal grid, or lamella, system (Fig. 8.30b), but many more members must be handled.
With stressed-skin construction, the roof deck acts integrally with the framing in carrying the load.
As in folded-plate construction, the stiffness can be increased by pleating or undulating the surface (Fig. 8.30c).
Regardless of the type of structural system selected, provision must be made for resisting the arch thrust. If ground conditions permit, the thrust may be resisted entirely by the foundations.
Otherwise, ties must be used. Arches supported above grade may be buttressed or tied. 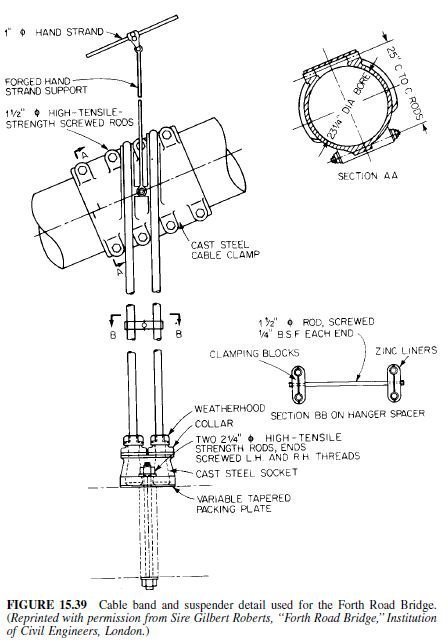