The determination of how to erect a building depends on many variables that must be studied by the erection engineer long before steel begins to arrive at the erection site. It is normal and prudent to have this erection planning developed on drawings and in written procedures.
Such documents outline the equipment to be used, methods of supporting the equipment, conditions for use of the equipment, and sequence of erection. In many areas, such documents are required by law. The work plan that evolves from them is valuable because it can result in economies in the costly field work. Special types of structures may require extensive planning to ensure stability of the structure during erection.
Mill buildings, warehouses, shopping centers, and low-rise structures that cover large areas usually are erected with truck or crawler cranes. Selection of the equipment to be used is based on site conditions, weight and reach for the heavy lifts, and availability of equipment.
Preferably, erection of such building frames starts at one end, and the crane backs away from the structure as erection progresses. The underlying consideration at all times is that an erected member should be stable before it is released from the crane. High-pitched roof trusses, for example, are often unstable under their own weight without top-chord bracing.
If roof trusses are long and shipped to the site in several sections, they are often spliced on the ground and lifted into place with one or two cranes.
Multistory structures, or portions of multistory structures that lie within reach and capacity limitations of crawler cranes, are usually erected with crawler cranes. For tall structures, a crawler crane places steel it can reach and then erects the guy derrick (or derricks), which will continue erection. Alternatively, tower crawler cranes (see Fig. 2.8) and climbing tower cranes (Fig. 2.9) are used extensively for multistory structures. Depending on height, these cranes can erect a complete structure. They allow erection to proceed vertically, completing floors or levels for other trades to work on before the structure is topped out.
Use of any erecting equipment that loads a structure requires the erector to determine that such loads can be adequately withstood by the structure or to install additional bracing or temporary erection material that may be necessary. For example, guy derricks impart loads at guys, and at the base of the boom, a horizontal thrust that must be provided for. 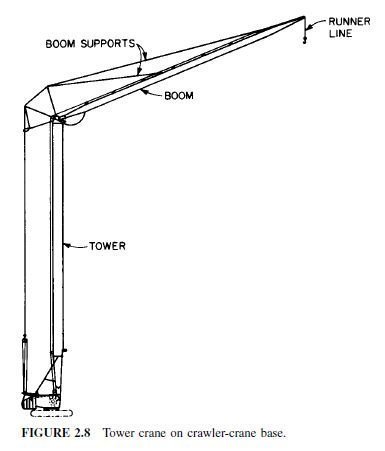 On occasion, floorbeams located between the base of the derrick and guy anchorages must be temporarily laterally supported to resist imposed compressive forces. Considerable temporary bracing is required in a multistory structure when a climbing crane is used. This type of crane imposes horizontal and vertical loads on the structure or its foundation. Loads are also imposed on the structure when the crane is jumped to the next level. Usually, these cranes jump about 6 floors at a time.
The sequence of placing the members of a multistory structure is, in general, columns, girders, bracing, and beams. The exact order depends on the erection equipment and type of framing. Planning must ensure that all members can be erected and that placement of one member does not prohibit erection of another.
Structural steel is erected by ‘‘ironworkers’’ who perform a multitude of tasks. The ground crew selects the proper members to hook onto the crane and directs crane movements in delivering the piece to the ‘‘connectors.’’ The connectors direct the piece into its final location, place sufficient temporary bolts for stability, and unhitch the crane. Regulations generally require a minimum of two bolts per connection or equivalent, but more should be used if required to support heavy pieces or loads that may accumulate before the permanent connection is made.
A ‘‘plumbing-up’’ (fitting-up crew), following the connectors, aligns the beams, plumbs the columns, and installs whatever temporary wire-rope bracing is necessary to maintain alignment. Following this crew are the gangs who make the permanent connection. This work, which usually follows several stories behind member erection, may include tightening high-strength bolts or welding connections. An additional operation usually present is placing and welding metal deck to furnish a working floor surface for subsequent operations. Safety codes require planking surfaces 25 to 30 ft (usually two floors) below the erection work  above. For this reason, deck is often spread on alternate floors, stepping back to spread the skipped floor after the higher floor is spread, thus allowing the raising gang to move up to the next tier. This is one reason why normal columns are two floors high.

In field-welded multistory buildings with continuous beam-to-column connections, the procedure is slightly different from that for bolted work. The difference is that the welded structure is not in its final alignment until beam-to-column connections are welded because of shrinkage caused by the welds. To accommodate the shrinkage, the joints must be opened up or the beams must be detailed long so that, after the welds are made, the columns are pulled into plumb. It is necessary, therefore, to erect from the more restrained portion of the framing to the less restrained. If a structure has a braced center core, that area will be erected first to serve as a reference point, and steel will be erected toward the perimeter of the structure. If the structure is totally unbraced, an area in the center will be plumbed and temporarily braced for reference. Welding of column splices and beams is done after the structure is plumbed. The deck is attached for safety as it is installed, but final welding of deck and installation of studs and closures is completed after the tier is plumbed. 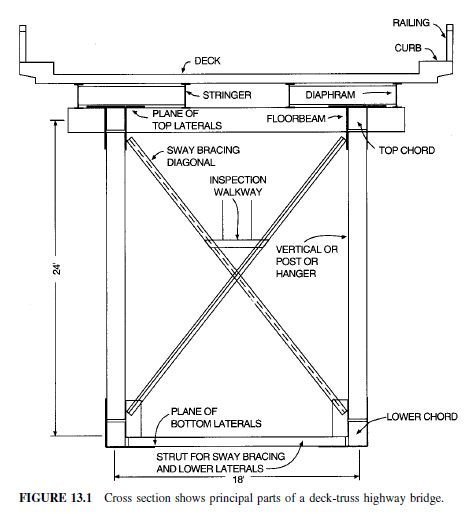