Rolled beams and fabricated girder spans provide economical bridges for railways. Laying out the lateral bracing system and diaphragms or cross frames is the first step in the design procedure. Some of the requirements for the bracing have grown out of railroad bridge experience, including some fatigue failures that required changes in previously acceptable practices.

A system of bottom lateral bracing should be provided for all spans more than 50 ft in length. Deck spans employing four or more beams per track, where the beams are less than 72 in deep, and where a reinforced concrete deck is integrated with the beams by shear connectors or where a cast in place concrete deck engages not less than 1 in of the beam flange thickness, do not require the bottom lateral bracing.
There should be top lateral bracing in all deck spans and in through spans, provided head room is adequate.
Where the floor system is designed to do so, it may be used to provide the required lateral bracing in its plane.
Double system bracing may be treated as acting simultaneously in a panel, provided the members meet the requirements for tension and compression.
Top flanges of through plate girders should be braced by brackets (knees). Brackets should be attached to the top flange of the floor beams and to stiffeners on the girders. The bracket should be as wide as practical and should extend to the top flange. In proportioning the bracket, some designers use a load acting horizontally through the flange equal to 2.5% of the maximum allowable capacity of the flange. This can be expressed as 0.025 x 0.55 Fy x  flange area. For spans that have solid floors, the bracket spacing should not exceed 12 ft.

Although cross frames and diaphragms have generally not been specifically designed for lateral distribution of loads, such distribution is inherent in typical construction.
The following are recommended practices:
1. Longitudinal girders and beams that are more than 42 in deep and which are spaced more than 48 in apart should be braced with cross frames. Cross frame diagonals should make an angle with the vertical that does not exceed 60 degrees. Minimum steel thickness and number of fasteners should be indicated in the design. Cross frames or diaphragms should be used at the ends of spans and should be proportioned for lateral and centrifugal loads, as well as jacking loads, if required. Where girders or beam ends frame into a floorbeam, cross frames or diaphragms are not required.
2. Cross frames and diaphragms, and their connections should be adequate to resist forces induced by out-of-plane bending and lateral loads. Connection plates for cross frames and diaphragms between beams or girders subject to out-of-plane bending should be adequately fastened to the web and both the top and bottom flanges of the beams or girders. Diaphragm and cross frame spacing may be made coincident with the stiffener spacing. The requirement to fasten the connection plate to the tension flange of the girder requires special attention in welded fabrication.

3. Longitudinal beams and girders of depth and spacing that do not require cross frames should be braced with rolled shape diaphragms that are as deep as the beam or girder will permit. Wide flange sections are frequently used, but channels may be an economical alternate.
The connection for these diaphragms should be designed to carry shear of at least 50%
of the shear capacity of the diaphragm.
4. On ballasted deck bridges utilizing closely spaced transverse floor beams, the beams should be connected with one or more lines of longitudinal diaphragms for each track.
5. The spacing of diaphragms or cross frames should be as follows:
For open deck construction: 18 ft maximum
For ballast deck construction with top lateral bracing: 18 ft maximum

For ballast deck construction without top lateral bracing: 12 ft maximum
For ballast deck construction with cast in place concrete decks that are integrated with the beams or girders: 24 ft maximum Where a cast-in-place concrete deck is used and the girders and beams are 54 in deep or less, a concrete diaphragm may be used, provided the reinforcing extends through the web and is developed in the adjacent concrete.

Where not fully supported laterally, the compression flange of a flexural member should be supported at points so that the ratio of the distance between points and radius of gyration of the flange plus the part of the web on the compression side of the neutral axis does not exceed 29,000/F , where Fy is the yield point of the material, psi. y In open deck construction, ties may be seated on the top flange. Tie deflection loads the flange non-uniformly with the passage of each wheel. The minimum thickness for flange angles should be 5⁄8 in if cover plates are used and 3⁄4 in where cover plates are not used.
Flanges of plate girders should be proportioned without the use of side plates.
Where cover plates are used, at least one plate of each flange should run the full length of the span. Partial length cover plates should be avoided, but where they are used, they should extend far enough beyond the theoretical end to develop the plate and to a section where the stress in the flange, without the cover plate, is not greater than the allowable fatigue stress.
In welded construction, only one plate should be used for the flange. Side plates should not be used. Flange plate width and thickness may be varied in the length of the member using appropriate welds and transitions. Where the ties will sit on the top flange, consider the following:
1. Wider flanges are subject to more flexure as the tie deflects.
2. The top surface of the flange should be one plane; therefore, adjust the depth of web if the flange thickness changes.
3. If the flange width changes, adjust tie (dapping) to fit the sections.
4. The flange width should accommodate tie hold down devices without fouling guard timbers.
Tie hold downs should go on the field side of the flange to avoid tie skew.
Only one cover plate should be used on the flange of a rolled beam. The cover plate should be of one thickness, full length and should be connected to the beam flange with continuous fillet welds. The cover plate thickness should be not more than 1.5 times the thickness of the beam flange and should meet the minimum thickness requirements. Beam flanges supporting ties frequently experience mechanical wear and corrosion. Tie bearing area on the cover plate should be at least as great as the bearing area of the tie plate.

Web plates of beams and girders must meet the minimum thickness requirements. Depending on detailing and service conditions, web plates are prone to spot corrosion. The thickness of the web plate should not be less than 1⁄6 the thickness of the flange, nor less than a thickness (in) of (squer(Fy) /30,000) times the clear distance between the flanges, (in) where Fy Fy is the material yield point, (psi).

Flange-to-web joints of welded plate girders should be the same for top and bottom flanges. For open deck construction, use full penetration groove welds. For ballast deck construction, with either steel plate or composite concrete, use full penetration groove welds or continuous fillet welds.
Flange angles in riveted or bolted construction should be connected to the web with enough fasteners to transfer the horizontal shear force to the flange section. The connection must also be designed for the effects of any load applied directly to the flange, at any point.
When ties bear on the flange, a wheel load plus 80% impact should be assumed to be distributed over 3 ft of flange length. On ballast deck construction, the same load should be assumed to be spread over 5 ft of flange length.

In railway bridges, intermediate stiffeners are frequently spaced such that they can be used as connection plates for cross frames and diaphragms. This practice, and the requirement that the connection plate be attached to the top and bottom flange, results in low allowable fatigue stresses when welded fabrication is used. The designer should review this detail early in the design process. A bolted connection may prove more economical.
Where the web depth between flanges (in) exceeds 11,400t /squer(Fy) , it should be stiffened y by pairs of plates or angles. Also, the clear distance between pairs of stiffeners should not exceed 72 in or 10,500t /squer(fv) . In these expressions, t  web thickness, (in) Fƒv y  web material yield point, psi, and ƒv  shear stress in gross section of web at point under review, psi.

Intermediate stiffeners on one side of the web may be used instead, on condition that they provide a moment of inertia equal to that of the minimum acceptable pair of plates or angles. They should be connected to the outstanding portion of the compression flange and, if they are used as connection plates for cross frames or diaphragms, they must be connected to the bottom flange. In open deck construction when ties bear on the top flange, experience shows that the flange should be stiffened on the track side of the web.
The width (in) of the outstanding element of a stiffener should not exceed 16 times its thickness and should not be less than 2 in plus 1⁄30 of the girder depth (in).

Truss Supports and Other Details 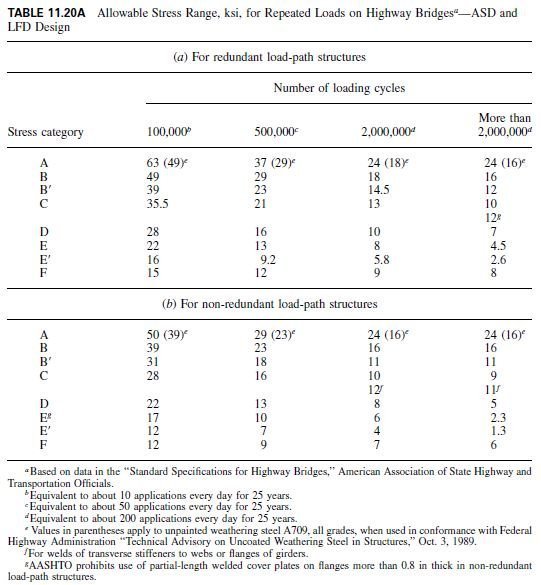