Some of the most important elements influencing selection of type and form of arch follow.
Foundation Conditions. If a bridge is required to carry a roadway or railroad across a deep valley with steep walls, an arch is probably a feasible and economical solution. (This assumes that the required span is within reasonable limits for arch construction.) The condition of steep walls indicates that foundation conditions should be suitable for the construction of small, economical abutments. Generally, it might be expected that under these conditions the solution would be a deck bridge. There may be other controls, however, that dictate otherwise. For example, the need for placing the arch bearings safely above highwater elevation, as related to the elevation of the deck, may indicate the advisability of a half-through structure to obtain a suitable ratio of rise to span. Also, variable foundation conditions on the walls of the valley may fix a particular elevation as much more preferable to others for the construction of the abutments. Balancing of such factors will determine the best layout to satisfy foundation conditions.
Tied-Arch Construction. At a bridge location where relatively deep foundations are required to carry heavy reactions, a true arch, transmitting reactions directly to buttresses, is not economical, except for short spans. There are two alternatives, however, that may make it feasible to use arch construction.
If a series of relatively short spans can be used, arch construction may be a good solution.
In this case, the bridge would comprise a series of equal or nearly equal spans. Under these conditions, dead-load thrusts at interior supports would be balanced or nearly balanced. With the short spans, unbalanced live-load thrusts would not be large. Accordingly, even with fairly deep foundations, intermediate pier construction may be almost as economical as for some other layout with simple or continuous spans. There are many examples of stone, concrete, and steel arches in which this arrangement has been used.
The other alternative to meet deep foundation requirements is tied-arch construction. The tie relieves the foundation of the thrust. This places the arch in direct competition with other types of structures for which only vertical reactions would result from the application of dead and live loading.
There has been some concern over the safety of tied-arch bridges because the ties can be classified as fracture-critical members. A fracture-critical member is one that would cause collapse of the bridge if it fractured. Since the horizontal thrust of a tied-arch is resisted by its tie, most tied arches would collapse if the tie were lost. While some concern over fracture of welded tie girders is well-founded, methods are available for introducing redundancy in the construction of ties. These methods include using ties fabricated from multiple boltedtogether
components and multiple post-tensioning tendons. Tied arches often provide cost

effective and esthetically pleasing structures. This type of structure should not be dismissed over these concerns, because it can be easily designed to address them.
Length of Span. Generally, determination of the best layout for a bridge starts with trial of the shortest feasible main span. Superstructure costs per foot increase rapidly with increase in span. Unless there are large offsetting factors that reduce substructure costs when spans are lengthened, the shortest feasible span will be the most economical.
Arch bridges are applicable over a wide range of span lengths. The examples in Art. 14.8 cover a range from a minimum of 193 ft to a maximum of 1700 ft. With present highstrength steels and under favorable conditions, spans on the order of 2000 ft are feasible for economical arch construction.
In addition to foundation conditions, many other factors may influence the length of span selected at a particular site. Over navigable waters, span is normally set by clearance requirements of regulatory agencies. For example, the U.S. Coast Guard has final jurisdiction over clearance requirements over navigable streams. In urban or other highly built-up areas, the span may be fixed by existing site conditions that cannot be altered.
Truss or Solid Rib. Most highway arch bridges with spans up to 750 ft have been built with solid ribs for the arch member. There may, however, be particular conditions that would make it more economical to use trusses for considerably shorter spans. For example, for a remote site with difficult access, truss arches may be less expensive than solid-ribbed arches, because the trusses may be fabricated in small, lightweight sections, much more readily transported to the bridge site.

In the examples of Art. 14.8, solid ribs have been used in spans up to 1255 ft, as for the Fremont Bridge, Portland, Ore. For spans over 750 ft, however, truss arches should be considered. Also, for spans under this length for very heavy live loading, as for railroad bridges, truss arches may be preferable to solid-rib construction.
For spans over about 600 ft, control of deflection under live loading may dictate the use of trusses rather than solid ribs. This may apply to bridges designed for heavy highway loading or heavy transit loading as well as for railroad bridges. For spans above 1000 ft, truss arches, except in some very unusual case, should be used.
Articulation. For true, solid-ribbed arches the choice between fixed and hinged ends will be a narrow one. In a true arch it is possible to carry a substantial moment at the springing line if the bearing details are arranged to provide for it. This probably will result in some economy, particularly for long spans. It is, however, common practice to use two-hinged construction.
An alternative is to let the arch act as two-hinged under partial or full dead load and then  fix the end bearings against rotation under additional load.
Tied arches act substantially as two-hinged, regardless of the detail of the connection to the tie.
Some arches have been designed as three-hinged under full or partial dead load and then converted to the two-hinged condition. In this case, the crown hinge normally is located on the bottom chord of the truss. If the axis of the bottom chord follows the load thrust line for the three-hinged condition, there will be no stress in the top chord or web system of the truss. Top chord and web members will be stressed only under load applied after closure.
These members will be relatively light and reasonably uniform in section. The bottom chord becomes the main load-bearing member.
If, however, the arch is designed as two-hinged, the thrust under all loading conditions will be nearly equally divided between top and bottom chords. For a given ratio of rise to span, the total horizontal thrust at the end will be less than that for the arrangement with part of the load carried as a three-hinged arch. Shifting from three to two hinges has the effect of increasing the rise of the arch over the rise measured from springing to centerline of bottom chord.

Esthetics. For arch or suspension-type bridges, a functional layout meeting structural requirements normally results in simple, clean-cut, and graceful lines. For long spans, no other
bridge type offered serious competition so far as excellent appearance is concerned until about 1950. Since then, introduction of cable-stayed bridges and orthotropic-deck girder construction has made construction of good-looking girders feasible for spans of 2500 ft or more. Even with conventional deck construction but with the advantage of high-strength steels, very long girder spans are economically feasible and esthetically acceptable.
The arch then must compete with suspension, cable-stayed, and girder bridges so far as esthetic considerations are concerned. From about 1000 ft to the maximum practical span for arches, the only competitors are the cable-supported types.

Generally, architects and engineers prefer, when all other things are equal, that deck structures be used for arch bridges. If a through or half-through structure must be used, solidribbed arches are desirable when appearance is of major concern, because the overhead structure can be made very light and clean-cut (Figs. 14.5 to 14.8 and 14.15 to 14.18).
Arch Form as Related to Esthetics. For solid-ribbed arches, designers are faced with the decision as to whether the rib should be curved or constructed on segmental chords (straight between panel points). A rib on a smooth curve presents the best appearance. Curved ribs, however, involve some increase in material and fabrication costs.
Another decision is whether to make the rib of constant depth or tapered.
One factor that has considerable bearing on both these decisions is the ratio of panel length to span. As panel length is reduced, the angular break between chord segments is reduced, and a segmental arch approaches a curved arch in appearance. An upper limit for panel length should be about 1⁄15 of the span.
In a study of alternative arch configurations for a 750-ft span, four solid-ribbed forms were considered. An architectural consultant rated these in the following order:
Tapered rib, curved
Tapered-rib on chords
Constant-depth rib, curved
Constant-depth rib on chords
He concluded that the tapered rib, 7 ft deep at the springing line and 4 ft deep at the crown, added considerably to the esthetic quality of the design as compared with a constant-depth rib. He also concluded that the tapered rib would minimize the angular breaks at panel points with the segmental chord axis. The tapered rib on chords was used in the final design of the structure. The effect of some of these variables on economy is discussed in Art. 14.6. 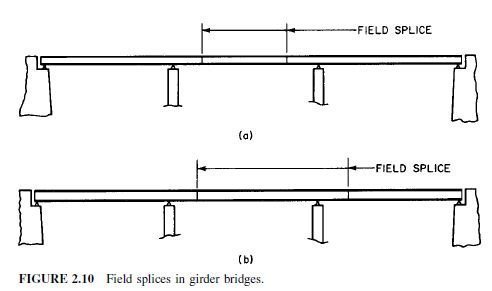