The primary advantage of the stub-girder system is that it provides ample space for routing mechanical ductwork throughout a floor while achieving a reduced floor construction depth as compared to conventional steel framing.
This system utilizes floorbeams that are supported on top of, rather than framed into, stub girders. Thus, the floorbeams are designed as continuous members, which results in steel savings and reduced deflections. A stub girder consists of a shallow wide-flange member directly beneath the floorbeams, and intermittent wide-flange stubs, having the same depth as the floorbeams. The stubs are placed perpendicular to and between the floorbeams, leaving space for the passage of mechanical ductwork (Fig. 8.21). The stubs are welded to the top of the stub girder and connect to the floor deck, which is typically concrete fill on metal deck, thereby enabling the stub girder to act compositely with the floor deck. 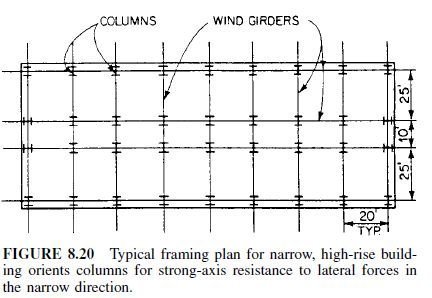 In an effort to provide a structural-steel framing system with a minimum floor-to- floor height for multistory residential construction, the staggered truss system was developed. This system consists of story-high trusses spanning the full width of a building. They are placed at alternate column lines in alternate stories, thus resulting in a staggered arrangement of trusses (Fig. 8.22). The trusses span about 60 ft between exterior columns, resulting in a columnfree interior space. In addition to the simple checkerboard pattern, alternative stacking patterns are possible in order to accommodate varied interior layouts (Fig. 8.23).

At a typical floor, the deck spans between the top chord of one truss and the bottom chord of the adjacent truss. Since the staggered trusses are typically spaced 20 to 30 ft on centers, a long-span floor deck system is required. Precast-concrete plank with topping is frequently used, since, in addition to accommodating the span the plank underside can be finished to provide an acceptable ceiling. An alternative system consists of long-span composite metal deck, having a depth of up to 71⁄2 in, with concrete fill. The top and bottom chords of the trusses are usually wide-flange shapes to efficiently resist the bending stresses induced by the floor loadings.
Diagonal web members of the trusses are deleted at corridor openings. This results in bending stresses in the truss chords due to Vierendeel action. Consequently, corridors are typically located near the building centerline, that is, near midspan of the trusses, at points of minimum truss shear, thereby minimizing the chord bending stresses.
Lateral loads in the transverse direction are transferred to the truss top chords via diaphragm action of the floor deck. These loads are transmitted through the depth of the trusses to the bottom chords and are then transferred through the floor deck at that level to the adjacent-truss top chords. The overturning couple produced by the transfer of lateral load from the top chord to the bottom chord is resisted by a vertical couple at the ends of the truss. Only axial forces are induced in the exterior columns. Therefore, transverse lateral loads are transmitted down through the structure without creating bending stresses in the trusses or columns, except at truss openings.
In the longitudinal direction, lateral loads are transferred via floor diaphragm action to the exterior columns. These resist the loads by conventional means, such as rigid frames or braced bents. To provide added strength and stiffness, the exterior columns are usually oriented so that the strong axis assists in resisting lateral loads in the longitudinal direction.
To achieve the necessary structural interaction between the trusses and the floor deck and to provide the necessary continuity of the floor diaphragm, adequate connection by such means as weld plates or shear connectors must be provided between the various structural elements. Floor decks with large openings or other shear discontinuities may require additional reinforcement.

Although the staggered-truss system resists gravity and lateral loads primarily by axial stresses, consideration must be given to the bending stresses in the exterior columns that result from the truss deformations under gravity loads (Fig. 8.24). These bending stresses can be significantly reduced by cambering the trusses, thereby preloading the columns. An alternative is to provide slotted bottom-chord connections that are torqued or welded after dead load is applied. 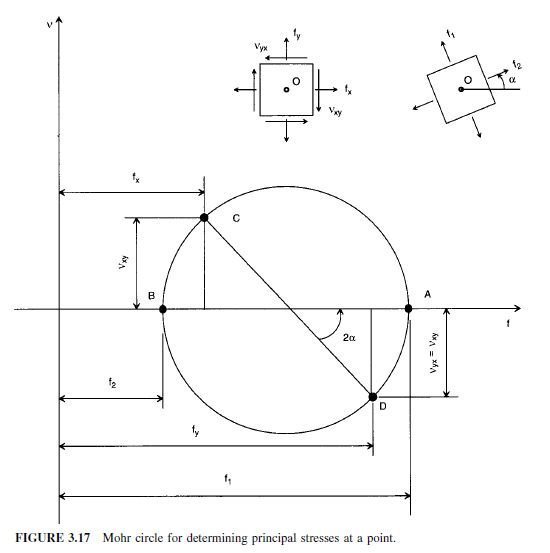 Types of Structural Members and Supports