Closed-section members, such as box girders, often are used in highway bridges because of their rigidity, economy, appearance, and resistance to corrosion. Box girders have high torsional rigidity. With their wide bottom flanges (Fig. 11.11), relatively shallow depths can be used economically. And for continuous box girders, intermediate supports often can be individual, slender columns simply connected to concealed cross frames.
While box girders may be multicell (with three or more webs), single-cell girders, as illustrated in Fig. 11.11, are generally preferred. For short spans, such girders can be entirely shop-fabricated, permitting assembly by welding under closely controlled and economical conditions. Longer spans often can be prefabricated to the extent that only one field splice is necessary. One single-cell girder can be used to support bridges with one or two traffic lanes. But usually, multiple boxes are used to carry two or more lanes to keep box width small enough to meet shipping-clearance requirements.
Through the use of shear connectors welded to the top flanges, a concrete deck can be made to work with the box girders in carrying bending stresses. In such cases the concrete may be considered part of the top flange, and the steel top flange need be only wide enough for erection and handling stability, load distribution to the web, and placement of required shear connectors (Fig. 11.11).
Composite box girders are designed much like plate girders (Arts. 11.15 and 11.16).
Criteria that are different are summarized in the following. For distribution of live loads to box girders, see Art. 11.7.
Additional criteria apply to curved box-girder bridges.
Girder Spacing. The criteria are applicable to bridges with multiple single-cell box girders.
Width center to center of top steel flanges in each girder should nearly equal the distance center to center between adjacent top steel flanges of adjacent boxes. (Width of boxes should nearly equal distance between boxes.) Cantilever overhang of deck, including curbs and parapets, should not exceed 6 ft or 60% of the distance between centers of adjacent top steel flanges of adjacent box girders.

Bracing. Diaphragms, cross frames, or other bracing should be provided within box girders at each support to resist transverse rotation, displacement, and distortion. Intermediate internal bracing for these purposes is not required if stability during concrete placement and curing has been otherwise ensured.
Lateral systems generally are not required between composite box girders. Need for a lateral system should be determined as follows: A horizontal load of 25 psf on the area of the girder exposed in elevation should be applied in the plane of the bottom flange. The resisting section should comprise the bottom flange serving as web, while portions of the box-girder webs, with width equal to 12 times their thickness, serve as flanges. A lateral system should be provided between bottom flanges if the combined stresses due to the 25- psf load and dead load of steel and deck exceed 150% of the allowable stress.
Access and Drainage. Manholes or other openings to the box interior should be provided for form removal, inspection, maintenance, drainage, or access to utilities.
Box-Girder Webs. Web plates may be vertical or inclined. A trapezoidal box generally requires a heavier bottom plate, and sometimes also a heavier concrete slab, but it may reduce the number of girders needed to support a deck. Design shear for an inclined web, kips, may be calculated from

where Vv  vertical shear, kips, on web and   angle web makes with the vertical.
Transverse bending stresses due to distortion of the cross section and bottom-flange vibrations need not be considered if the web slope relative to the plane of the bottom flange is 4:1 or more and the bottom-flange width does not exceed 20% of the span. Furthermore, transverse bending stresses due to supplementary loadings, such as utilities, should not exceed 5 ksi. When any of the preceding limits are exceeded, transverse bending stresses due to all causes should be restricted to a maximum stress or stress range of 20 ksi.
Bottom Flange in Tension. Bending stress cannot be assumed uniformly distributed horizontally over very wide flanges. To simplify design, only a portion of such a flange should be considered effective, and the horizontal distribution of the bending stresses may be assumed uniform over that portion.
For simply supported girders, and between inflection points of continuous spans, the bottom flange may be considered completely effective if its width does not exceed one-fifth the span. For wider flanges, effective width equals one-fifth the span.
Unstiffened Compression Flanges. Compression flanges designed for the basic allowable stress of 0.55Fy need not be stiffened if the width-thickness ratio does not exceed 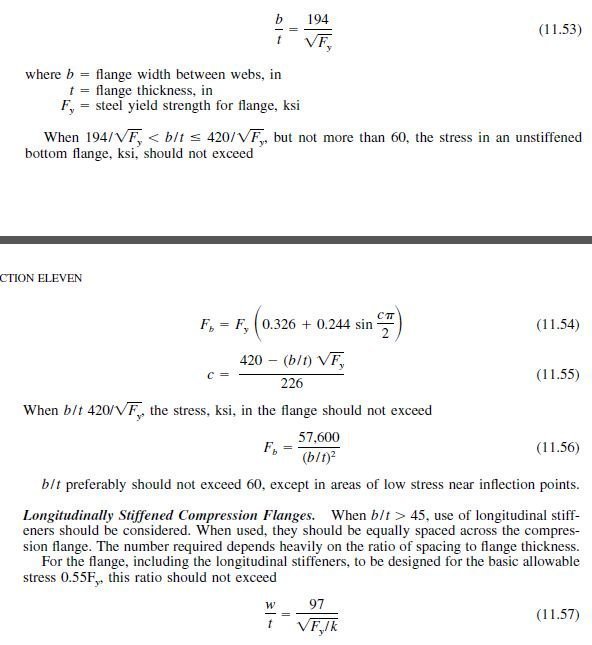 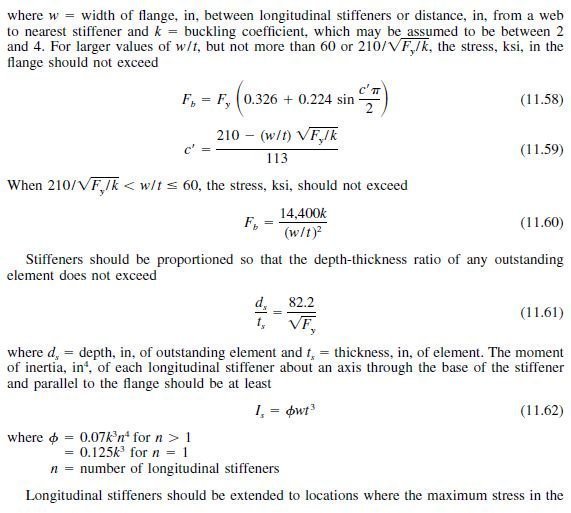 flange does not exceed that allowed for base metal adjacent to or connected by fillet welds.
At least one transverse stiffener should be installed near dead-load inflection points. It should be the same size as the longitudinal stiffeners. 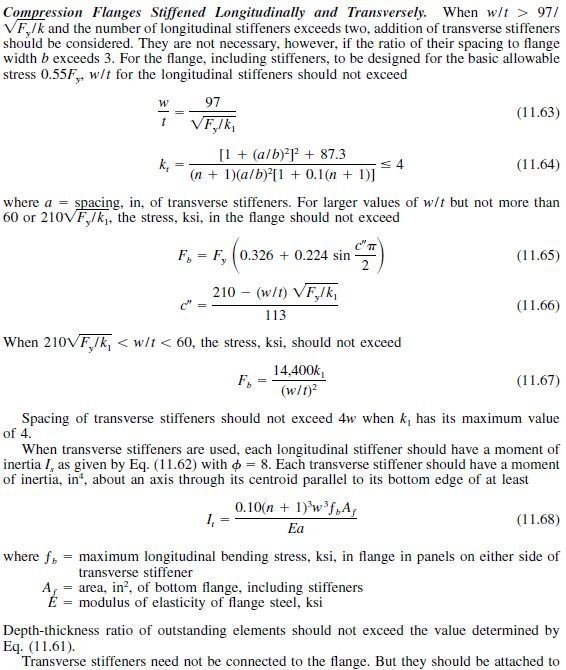 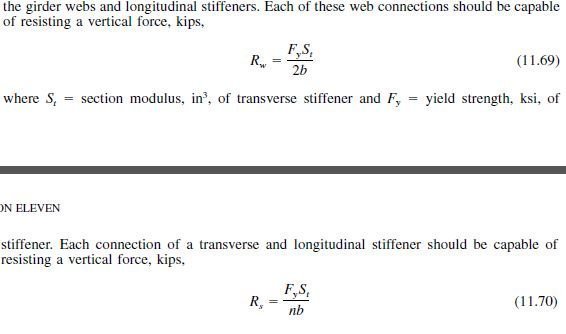 Flange-to-Web Welds. Total effective thickness of welds connecting a flange to a web should at least equal the web thickness, except that when two or more diaphragms per span are provided, minimum size fillet welds may be used (see Art. 11.22). If fillet welds are used, they should be placed on both sides of the flange or web.