Brackets are projections that carry loads. The connection of a bracket to a support has to transmit both shear and moment. Fasteners or welds may be used for the purpose. Connections may be made with fasteners or welds subjected only to shear or to combined shear and tension.
Figure 5.46 shows a plate bracket connected with bolts in single shear. Design of this type of connection is similar to that of the web splice in Fig. 5.42. Each fastener is subjected to a shear load and a load due to moment. The load due to moment on any fastener acts normal to the radius vector from the center of gravity O of the fastener group to the fastener.
The maximum load due to moment is given by Eq. (5.13). The resultant of this load and the shear load must be less than the allowable capacity of the fastener. Vectorial addition of the loads due to bending and shear must be performed for the critical fasteners to determine the maximum resultant.
As for a web splice, computations usually are simpler if distances and forces are resolved into horizontal and vertical components, and if J for Eq. (5.13) is obtained from Eq. (5.15). 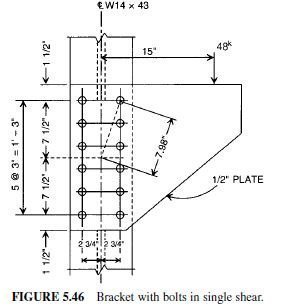 connection is satisfactory.
An ultimate-strength method that gives an accurate estimate of the strength of eccentrically
loaded bolt groups may be used instead of the preceding procedure. The method assumes
that fastener groups rotate about an instantaneous center. (This point coincides with the centroid of a group only when the moment arm l becomes very large.) Tables in the
AISC ASD and LRFD manuals are based on this method.

Elastic Method. Because of symmetry, the center of gravityO of the weld group is located vertically halfway between top and bottom of the 16-in-deep plate. The horizontal location of O relative to the vertical weld is obtained by dividing the moments of the weld lengths about the vertical weld by the total length of welds.

Welds in Tension and Shear. Brackets also can be connected to supports with fillet welds in combined shear and tension. For the bracket in Fig. 5.49, for example, the welds carry a shear (kips per in) of

In addition, the moment is resisted by the upper portion of the welds in tension and the pressure of the lower part of the bracket against the support. Both the elastic and inelastic methods assume that the weld carries all the load (bearing pressure between the bracket and the lower part of the support is neglected). The neutral axis is taken at the center of gravity of the weld group. The intensity of load at any point in the weld is proportional to the distance from the neutral axis, and the resisting moment per inch is proportional to that distance. For the elastic method, tension (kips per in) at the most heavily stressed point of the welds may be computed from 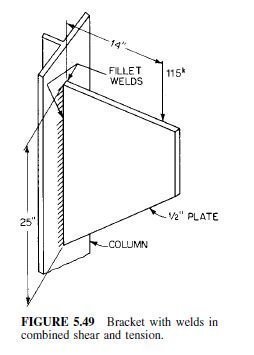 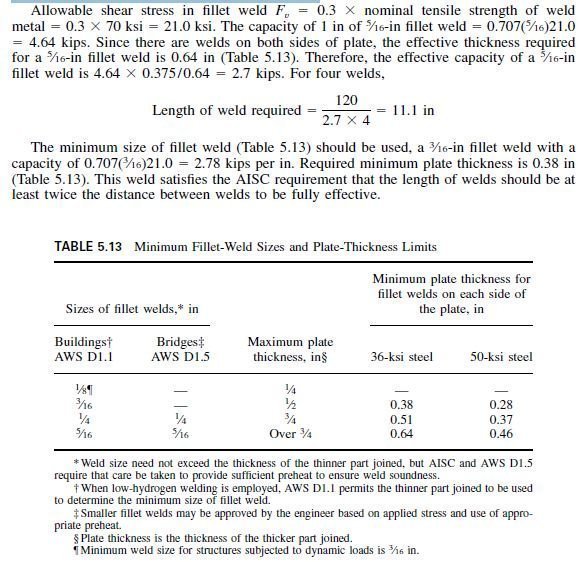 Truss Supports and Other Details