Safe yet economical building designs necessitate application of reasonable and prudent design loads. Computation of design loads can require a complex analysis involving such considerations as building end use, location, and geometry.

Before initiating a design, engineers must become familiar with the load requirements of the local building code. All building codes specify minimum design loads. These include, when applicable, dead, live, wind, earthquake, and impact loads, as well as earth pressures.
Dead, floor live, and roof live loads are considered vertical loads and generally are specified as force per unit area, e.g., lb per ft2 or kPa. These loads are often referred to as gravity loads. In some cases, concentrated dead or live loads also must be considered.
Wind loads are assumed to act normal to building surfaces and are expressed as pressures, e.g., psf or kPa. Depending on the direction of the wind and the geometry of the structure, wind loads may exert either a positive or negative pressure on a building surface.
All building codes and project specifications require that a building have sufficient strength to resist imposed loads without exceeding the design strength in any element of the structure. Of equal importance to design strength is the design requirement that a building be functional as stipulated by serviceability considerations. Serviceability requirements are generally given as allowable or permissible maximum deflections, either vertical or horizontal, or both.

The dead load of a building includes weights of walls, permanent partitions, floors, roofs, framing, fixed service equipment, and all other permanent construction (Table 6.1). The American Society of Civil Engineers (ASCE) standard, ‘‘Minimum Design Loads for Buildings and Other Structures’’ (ASCE 7-95), gives detailed information regarding computation of dead loads for both normal and special considerations.

Typical requirements for live loads on floors for different occupancies are summarized in Table 6.2. These minimum design loads may differ from requirements of local or state building codes or project specifications. The engineer of record for the building to be constructed is responsible for determining the appropriate load requirements.
Temporary or movable partitions should be considered a floor live load. For structures designed for live loads exceeding 80 lb per ft2, however, the effect of partitions may be ignored, if permitted by the local building code.
Live Load Reduction. Because of the small probability that a member supporting a large floor area will be subjected to full live loading over the entire area, building codes permit a reduced live load based on the areas contributing loads to the member (influence area). 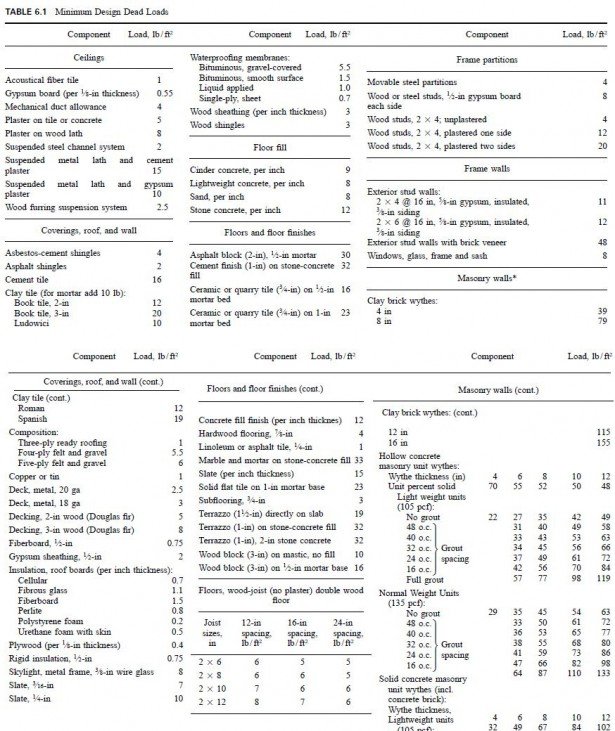 This is an arrangement of live loads that produces maximum possible stresses at a point in a continuous beam. The member carries full dead and live loads, but full live load may occur only in alternating spans or some combination of spans. In a high-rise building frame, maximum positive moments are produced by a checkerboard pattern of live load, i.e., by  full live load on alternate spans horizontally and alternate bays vertically. Maximum negative moments at a joint occur, for most practical purposes, with full live loads only on the spans adjoining the joint. Thus pattern loading may produce critical moments in certain members and should be investigated. Classification and Characteristics of Cable-Stayed Bridges