As pointed out in Art. 1.12, heating changes the tensile properties of steels. Actually, heating changes many steel properties. Often, the primary reason for such changes is a change in structure brought about by heat. Some of these structural changes can be explained with the aid of an iron-carbon equilibrium diagram (Fig. 1.14).
The diagram maps out the constituents of carbon steels at various temperatures as carbon content ranges from 0 to 5%. Other elements are assumed to be present only as impurities, in negligible amounts.
If a steel with less than 2% carbon is very slowly cooled from the liquid state, a solid solution of carbon in gamma iron will result. This is called austenite. (Gamma iron is a pure iron whose crystalline structure is face-centered cubic.)
If the carbon content is about 0.8%, the carbon remains in solution as the austenite slowly cools, until the A1 temperature (1340F) is reached. Below this temperature, the austenite transforms to the eutectoid pearlite. This is a mixture of ferrite and cementite (iron carbide, Fe3C). Pearlite, under a microscope, has a characteristic platelike, or lamellar, structure with an iridescent appearance, from which it derives its name.
If the carbon content is less than 0.8%, as is the case with structural steels, cooling austenite below the A3 temperature line causes transformation of some of the austenite to ferrite. (This is a pure iron, also called alpha iron, whose crystalline structure is bodycentered cubic.) Still further cooling to below the A1 line causes the remaining austenite to transform to pearlite. Thus, as indicated in Fig. 1.14, low-carbon steels are hypoeutectoid steels, mixtures of ferrite and pearlite. 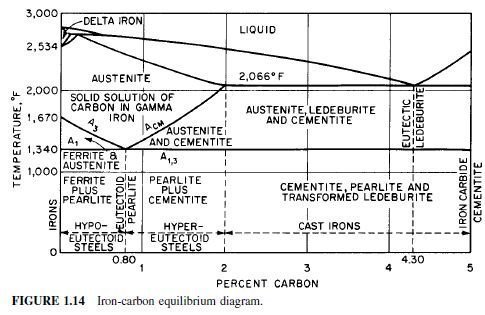 Ferrite is very ductile but has low tensile strength. Hence carbon steels get their high strengths from the pearlite present or, more specifically, from the cementite in the pearlite.
The iron-carbon equilibrium diagram shows only the constituents produced by slow cooling.
At high cooling rates, however, equilibrium cannot be maintained. Transformation temperatures are lowered, and steels with microstructures other than pearlitic may result. Properties of such steels differ from those of the pearlitic steels. Heat treatments of steels are based on these temperature effects.
If a low-carbon austenite is rapidly cooled below about 1300F, the austenite will transform at constant temperature into steels with one of four general classes of microstructure:
Pearlite, or lamellar, microstructure results from transformations in the range 1300 to 1000F. The lower the temperature, the closer is the spacing of the platelike elements. As the spacing becomes smaller, the harder and tougher the steels become. Steels such as A36, A572, and A588 have a mixture of a soft ferrite matrix and a hard pearlite.
Bainite forms in transformations below about 1000F and above about 450F. It has an acicular, or needlelike, microstructure. At the higher temperatures, bainite may be softer than the pearlitic steels. However, as the transformation temperature is decreased, hardness and toughness increase.
Martensite starts to form at a temperature below about 500F, called the Ms temperature.
The transformation differs from those for pearlitic and bainitic steels in that it is not timedependent.
Martensite occurs almost instantly during rapid cooling, and the percentage of austenite transformed to martensite depends only on the temperature to which the steel is cooled. For complete conversion to martensite, cooling must extend below the Mƒ temperature, which may be 200F or less. Like bainite, martensite has an acicular microstructure, but martensite is harder and more brittle than pearlitic and bainitic steels. Its hardness varies with carbon content and to some extent with cooling rate. For some applications, such as those where wear resistance is important, the high hardness of martensite is desirable, despite brittleness. Generally, however, martensite is used to obtain tempered martensite, which has superior properties.
Tempered martensite is formed when martensite is reheated to a subcritical temperature after quenching. The tempering precipitates and coagulates carbides. Hence the microstructure consists of carbide particles, often spheroidal in shape, dispersed in a ferrite matrix. The  result is a loss in hardness but a considerable improvement in ductility and toughness. The heat-treated carbon and HSLA steels and quenched and tempered constructional steels discussed in Art. 1.1 are low-carbon martensitic steels.