Rolled wide-flange shapes generally are the most economical type of construction for shortspan bridges. The beams usually are used as stringers, set, at regular intervals, parallel to the direction of traffic, between piers or abutments (Fig. 12.1). A concrete deck, cast on the top flange, provides lateral support against buckling. Diaphragms between the beams offer additional bracing and also distribute loads laterally to the beams before the concrete deck has cured. 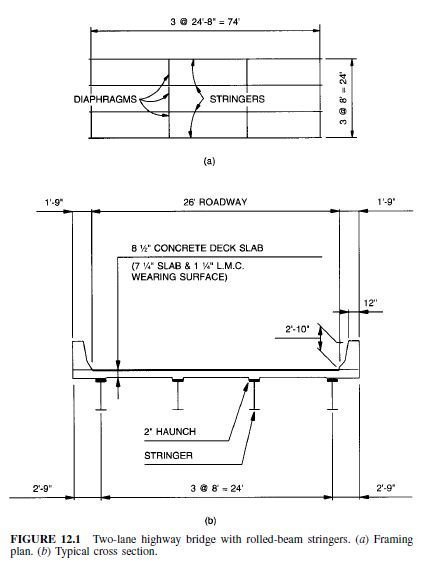 Spacing. For railroad bridges, two stringers generally carry each track. They may, however,
be more widely spaced than the rails, for stability reasons. If a bridge contains only two
stringers, the distance between their centers should be at least 6 ft 6 in. When more stringers
are used, they should be placed to distribute the track load uniformly to all beams.
For highway bridges, one factor to be considered in selection of stringer spacing is the
minimum thickness of concrete deck permitted. For the deck to serve at maximum efficiency, its span between stringers should be at least that requiring the minimum thickness. But when stringer spacing requires greater than minimum thickness, the dead load is increased, cutting into the savings from use of fewer stringers. For example, if the minimum thickness of concrete slab is about 8 in, the stringer spacing requiring this thickness is about 8 ft for 4,000-psi concrete. Thus, a 29-ft 6-in-wide bridge, with 26-ft roadway, could be carried on four girders with this spacing. The outer stringers then would be located 1 ft from the curb into the roadway, and the outer portion of the deck, with parapet, would cantilever 2 ft 9 in beyond the stringers.

If an outer stringer is placed under the roadway, the distance from the center of the stringer to the curb preferably should not exceed about 1 ft.
Stringer spacing usually lies in the range 6 to 15 ft. The smaller spacing generally is desirable near the upper limits of rolled-beam spans.
The larger spacing is economical for the longer spans where deep, fabricated, plate girders are utilized. Wider spacing of girders has resulted in development of long-span stay-in-place forms. This improvement in concrete-deck forming has made steel girders with a concrete deck more competitive.
Regarding deck construction, while conventional cast-in-place concrete decks are commonplace, precast-concrete deck slab bridges are often used and may prove practical and economical if stage construction and maintenance of traffic are required. Additionally, use of lightweight concrete, a durable and economical product, may be considered if dead weight is a problem.
Other types of deck are available such as steel orthotropic plates (Arts. 12.14 and 12.15).
Also, steel grating decks may be utilized, whether unfilled, half-filled, or fully filled with concrete. The latter two deck-grating construction methods make it possible to provide composite action with the steel girder.
Short-Span Stringers. For spans up to about 40 ft, noncomposite construction, where beams act independently of the concrete slab, and stringers of AASHTO M270 (ASTM A709), Grade 36 steel often are economical. If a bridge contains more than two such spans in succession, making the stringers continuous could improve the economy of the structure.
Savings result primarily from reduction in number of bearings and expansion joints, as well as associated future maintenance costs. A three-span continuous beam, for example, requires four bearings, whereas three simple spans need six bearings.
For such short spans, with relatively low weight of structural steel, fabrication should be kept to a minimum. Each fabrication item becomes a relatively large percentage of material cost. Thus, cover plates should be avoided. Also, diaphragms and their connections to the stringers should be kept simple. For example. they may be light channels field bolted or welded to plates welded to the beam webs (Fig. 12.2). 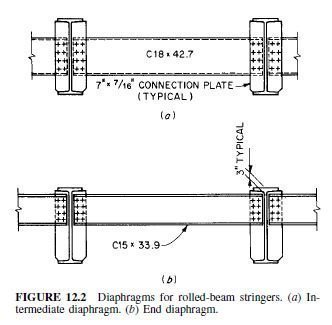 For spans 40 ft and less, each beam reaction should be transferred to a bearing plate through a thin sole plate welded to the beam flange. The bearing may be a flat steel plate or an elastomeric pad. At interior supports of continuous beams, sole plates should be wider than the flange. Then, holes needed for anchor bolts can be placed in the parts of the plates extending beyond the flange. This not only reduces fabrication costs by avoiding holes in the stringers but also permits use of lighter stringers, because the full cross section is available for moment resistance.
At each expansion joint, the concrete slab should be thickened to form a transverse beam, to protect the end of the deck. Continuous reinforcement is required for this beam. For the purpose, slotted holes should be provided in the ends of the steel beams to permit the reinforcement to pass through.
Live Loads. Although AASHTO ‘‘Standard Specifications for Highway Bridges’’ specify for design H15-44, HS15-44, H20-44, and HS20-44 truck and lane loadings (Art. 11.4), many state departments of transportation are utilizing larger live loadings. The most common is HS20-44 plus 25% (HS25). An alternative military loading of two axles 4 ft apart, each axle weighing 24 kips, is usually also required and should be used if it causes higher stresses.
Some states prefer 30 kip axles instead of 24 kips.
Dead Loads. Superstructure design for bridges with a one-course deck slab should include a 25-psf additional dead load to provide for a future 2-in-thick overlay wearing surface.
Bridges with a two-course deck slab generally do not include this additional dead load. The assumption is that during repaving of the adjoining roadway, the 11⁄4-in wearing course (possibly latex modified concrete) will be removed and replaced only if necessary.
If metal stay-in-place forms are permitted for deck construction, consideration should be given to providing for an additional 8 to 12 psf to be included for the weight of the permanent  steel form plus approximately 5 psf for the additional thickness of deck concrete required.
The specific additional dead load should be determined for the form to be utilized. The additional dead load is considered secondary and may be included in the superimposed dead load supported by composite construction, when shoring is used.

Long-Span Stringers. Composite construction with rolled beams (Art. 11.16) may become economical when simple spans exceed about 40 ft, or the end span of a continuous stringer exceeds 50 ft, or the interior span of a continuous stringer exceeds 65 ft. W36 rolled wideflange beams of Grade 36 steel designed for composite action with the concrete slab are economical for spans up to about 85 ft, though such beams can be used for longer spans.
When spans exceed 85 ft, consideration should be given to rolled beams made of highstrength steels, W40 rolled wide-flange beams, or to plate-girder stringers. In addition to greater economy than with noncomposite construction, composite construction offers smaller deflections or permits use of shallower stringers, and the safety factor is larger.
For long-span, simply supported, composite, rolled beams, costs often can be cut by using a smaller rolled section than required for maximum moment and welding a cover plate to the bottom flange in the region of maximum moment (partial-length cover plate). For the purpose, one plate of constant width and thickness should be used. It also is desirable to use cover plates on continuous beams. The cover plate thickness should generally be limited to about 1 in and be either 2 in narrower or 2 in maximum wider than the flange. Longitudinal fillet welds attach the plate to the flange. Cover plates may be terminated and end-welded within the span at a developed length beyond the theoretical cutoff point. American Association of State Highway and Transportation Officials (AASHTO) specifications provide for a Category E allowable fatigue-stress range that must be utilized in the design of girders at this point.
Problems with fatigue cracking of the end weld and flange plate of older girders has caused designers to avoid terminating the cover plate within the span. Some state departments of transportation specify that cover plates be full length or terminated within 2 ft of the end bearings. The end attachments may be either special end welds or bolted connections.

Similarly, for continuous, noncomposite, rolled beams, costs often can be cut by welding cover plates to flanges in the regions of negative moment. Savings, however, usually will not be achieved by addition of a cover plate to the bottom flange in positive-moment areas.
For composite construction, though, partial-length cover plates in both negative-moment and positive-moment regions can save money. In this case, the bottom cover plate is effective because the tensile forces applied to it are balanced by compressive forces acting on the concrete slab serving as a top cover plate.
For continuous stringers, composite construction can be used throughout or only in positive-moment areas. Costs of either procedure are likely to be nearly equal.
Design of composite stringers usually is based on the assumption that the forms for the concrete deck are supported on the stringers. Thus, these beams have to carry the weight of the uncured concrete. Alternatively, they can be shored, so that the concrete weight is transmitted directly to the ground. The shores are removed after the concrete has attained sufficient strength to participate in composite action. In that case, the full dead load may be assumed applied to the composite section. Hence, a slightly smaller section can be used for the stringers than with unshored erection. The savings in steel, however, may be more than offset by the additional cost of shoring, especially when provision has to be made for traffic below the span.
Diaphragms for long-span rolled beams, as for short-span, should be of minimum permitted size. Also, connections should be kept simple (Fig. 12.2). At span ends, diaphragms should be capable of supporting the concrete edge beam provided to protect the end of the concrete slab. Consideration should also be given to designing the end diaphragms for jacking forces for future bearing replacements.
For simply supported, long-span stringers, one end usually is fixed, whereas arrangements are made for expansion at the other end. Bearings may be built up of steel or they may be elastomeric pads. A single-thickness pad may be adequate for spans under 85 ft. For longer spans, laminated pads will be needed. Expansion joints in the deck may be made economically with extruded or preformed plastics.
Cambering of rolled-beam stringers is expensive. It often can be avoided by use of different slab-haunch depths over the beams. 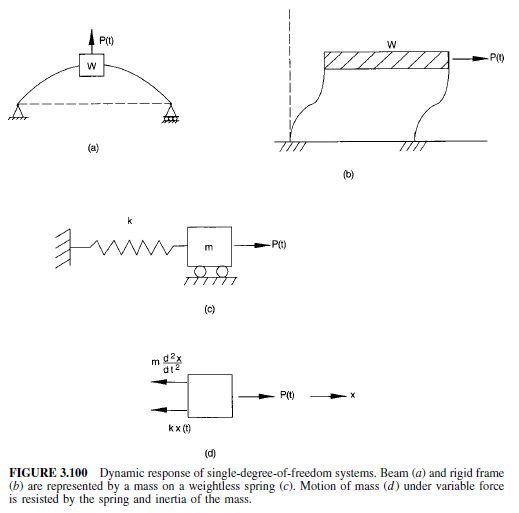 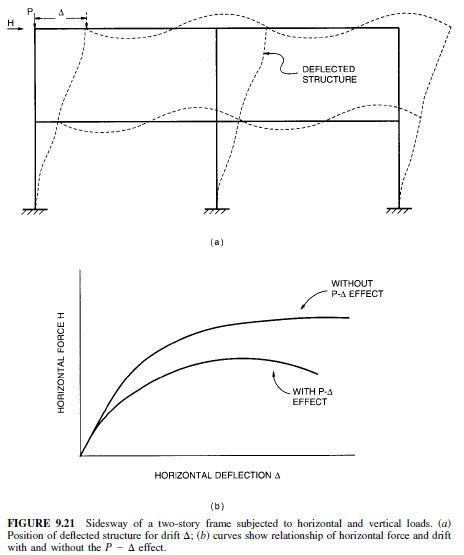