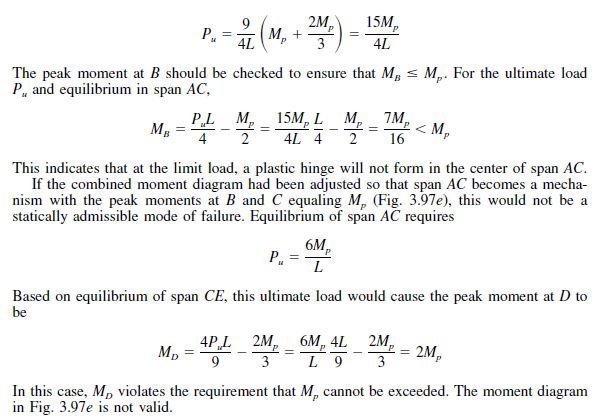 As an alternative, the mechanism method is based on the upper-bound theorem. It includes the following steps:
• Determine the locations of possible plastic hinges.
• Select plastic-hinge configurations that represent all possible mechanism modes of failure.
• Using the principle of virtual work, which equates internal work to external work, calculate the ultimate load for each mechanism.
• Assume that the mechanism with the lowest critical load is the most probable and hence represents the ultimate load.
• Check to see that Mp is not exceeded anywhere.
To illustrate the method, the ultimate load will be found for the continuous beam in Fig. 3.97a. Basically, the beam will become unstable when plastic hinges form at B and C (Fig. 3.98a) or C and D (Fig. 3.98b). The resulting constructions are called either independent or fundamental mechanisms. The beam is also unstable when hinges form at B, C, and D (Fig. 3.98c). This configuration is called a composite or combination mechanism and also
will be discussed.
Applying the principle of virtual work (Art. 3.23) to the beam mechanism in span AC (Fig. 3.98d), external work equated to internal work for a virtual end rotation Q gives 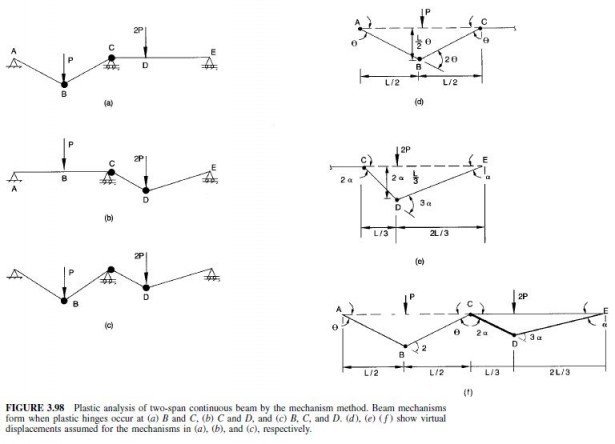 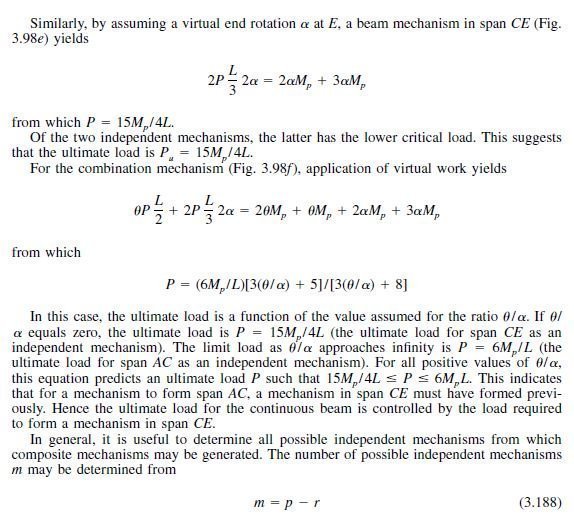 where p=  the number of possible plastic hinges and r = the number of redundancies.
Composite mechanisms are selected in such a way as to maximize the total external work or minimize the total internal work to obtain the lowest critical load. Composite mechanisms  that include the displacement of several loads and elimination of plastic hinges usually provide the lowest critical loads.

The methods of plastic analysis presented in Secs. 3.50.1 and 3.50.2 can be extended to analysis of frames and trusses. However, such analyses can become complex, especially if they incorporate second-order effects (Art. 3.46) or reduction in plastic-moment capacity for members subjected to axial force and bending (Art. 3.49).