Suspension bridges with cables made of high-strength, zinc-coated, steel wires are suitable for the longest of spans. Such bridges usually become economical for spans in excess of 1000 ft, depending on specific site constraints. Nevertheless, many suspension bridges with spans as short as 300 or 400 ft have been built, to take advantage of their esthetic features.
The basic economic characteristic of suspension bridges, resulting from use of highstrength materials in tension, is lightness, due to relatively low dead load. But this, in turn, carries with it the structural penalty of flexibility, which can lead to large deflections under live load and susceptibility to vibrations. As a result, suspension bridges are more suitable for highway bridges than for the more heavily loaded railroad bridges. Nevertheless, for either highway or railroad bridges, care must be taken in design to provide resistance to wind- or seismic-induced oscillations, such as those that caused collapse of the first Tacoma Narrows Bridge in 1940.

A pure suspension bridge is one without supplementary stay cables and in which the main cables are anchored externally to anchorages on the ground. The main components of a suspension bridge are illustrated in Fig. 15.8. Most suspension bridges are stiffened; that is, as shown in Fig. 15.8, they utilize horizontal stiffening trusses or girders. Their function is to equalize deflections due to concentrated live loads and distribute these loads to one or more main cables. The stiffer these trusses or girders are, relative to the stiffness of the cables, the better this function is achieved. (Cables derive stiffness not only from their crosssectional dimensions but also from their shape between supports, which depends on both cable tension and loading.)
For heavy, very long suspension spans, live-load deflections may be small enough that stiffening trusses would not be needed. When such members are omitted, the structure is an unstiffened suspension bridge. Thus, if the ratio of live load to dead load were, say, 14, the midspan deflection would be of the order of 1⁄100 of the sag, or 1/1,000 of the span, and the use of stiffening trusses would ordinarily be unnecessary. (For the George Washington Bridge as initially constructed, the ratio of live load to dead load was approximately 16. Therefore, it did not need a stiffening truss.)

Several arrangements of suspension bridges are illustrated in Fig. 15.9. The main cable is continuous, over saddles at the pylons, or towers, from anchorage to anchorage. When the main cable in the side spans does not support the bridge deck (side spans independently supported by piers), that portion of the cable from the saddle to the anchorage is virtually straight and is referred to as a straight backstay. This is also true in the case shown in Fig. 15.9a where there are no side spans.
Figure 15.9d represents a multispan bridge. This type is not considered efficient, because its flexibility distributes an undesirable portion of the load onto the stiffening trusses and may make horizontal ties necessary at the tops of the pylons. Ties were used on several French multispan suspension bridges of the nineteenth century. However, it is doubtful whether tied towers would be esthetically acceptable to the general public. Another approach to multispan suspension bridges is that used for the San Francisco–Oakland Bay Bridge (Fig.  15.10). It is essentially composed of two three-span suspension bridges placed end to end.

This system has the disadvantage of requiring three piers in the central portion of the structure where water depths are likely to be a maximum.
Suspension bridges may also be classified by type of cable anchorage, external or internal.
Most suspension bridges are externally anchored (earth-anchored) to a massive external anchorage (Fig. 15.9a to d). In some bridges, however, the ends of the main cables of a suspension bridge are attached to the stiffening trusses, as a result of which the structure becomes self-anchored (Fig. 15.9e). It does not require external anchorages. 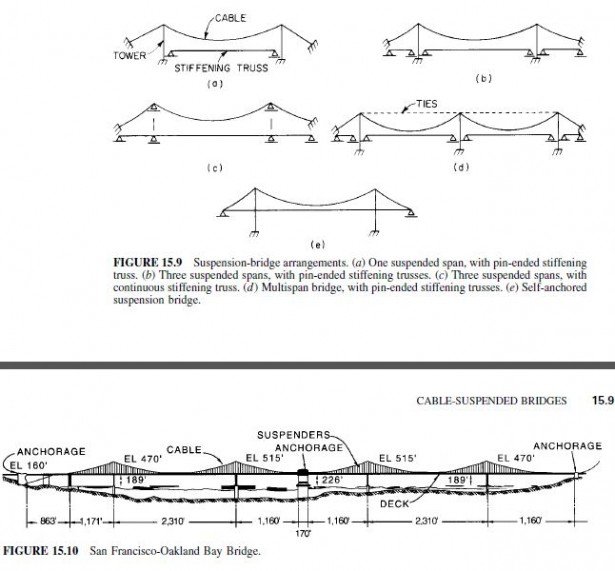 the stiffening trusses is 25% of the main-cable sag).
Although most suspension bridges employ vertical suspender cables to support the stiffening trusses or the deck structural framing directly (Fig. 15.8), a few suspension bridges, for example, the Severn Bridge in England and the Bosporus Bridge in Turkey, have inclined or diagonal suspenders (Fig. 15.12). In the vertical-suspender system, the main cables are incapable of resisting shears resulting from external loading. Instead, the shears are resisted by the stiffening girders or by displacement of the main cables. In bridges with inclined suspenders, however, a truss action is developed, enabling the suspenders to resist shear.
(Since the cables can support loads only in tension, design of such bridges should ensure that there always is a residual tension in the suspenders; that is, the magnitude of the compression generated by live-load shears should be less than the dead-load tension.) A further advantage of the inclined suspenders is the damping properties of the system with respect to aerodynamic oscillations.
(N. J. Gimsing, ‘‘Cable-Supported Bridges—Concept and Design,’’ John Wiley & Sons, Inc., New York.)

Figure 15.13 shows typical cross sections of suspension bridges. The bridges illustrated in Fig. 15.13a, b, and c have stiffening trusses, and the bridge in Fig. 15.13d has a steel boxgirder deck. Use of plate-girder stiffening systems, forming an H-section deck with horizontal web, was largely superseded after the Tacoma Narrows Bridge failure by truss and boxgirder stiffening systems for long-span bridges. The H deck, however, is suitable for short spans.
The Verrazano Narrows Bridge (Fig. 15.13a), employs 6-in-deep, concrete-filled, steelgrid flooring on steel stringers to achieve strength, stiffness, durability, and lightness. The double-deck structure has top and bottom lateral trusses. These, together with the transverse beams, stringers, cross frames, and stiffening trusses, are conceived to act as a tube resisting vertical, lateral, and torsional forces. The cross frames are rigid frames with a vertical member in the center.
The Mackinac Bridge (Fig. 15.13b) employs a 41⁄4-in. steel-grid flooring. The outer two lanes were filled with lightweight concrete and topped with bituminous-concrete surfacing.
The inner two lanes were left open for aerodynamic venting and to reduce weight. The single deck is supported by stiffening trusses with top and bottom lateral bracing as well as ample cross bracing.
The Triborough Bridge (Fig. 15.13c) has a reinforced-concrete deck carried by floorbeams supported at the lower panel points of through stiffening trusses. 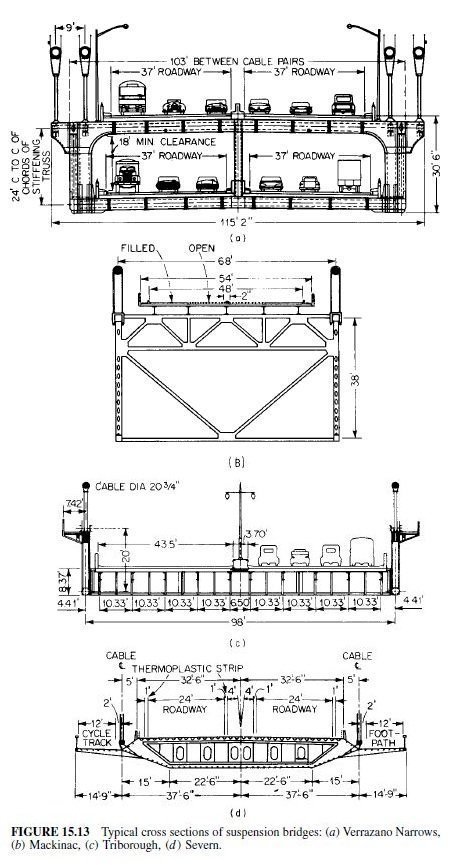 The Severn Bridge (Fig. 15.13d) employs a 10-ft-deep torsion-resisting box girder to support an orthotropic-plate deck. The deck plate is stiffened by steel trough shapes, and the remaining plates, by flat-bulb stiffeners. The box was faired to achieve the best aerodynamic characteristics.

Typical pylon configurations, shown in Fig. 15.14, are portal frames. For economy, pylons should have the minimum width in the direction of the span consistent with stability but  sufficient width at the top to take the cable saddle.
Most suspension bridges have cables fixed at the top of the pylons. With this arrangement, because of the comparative slenderness of pylons, top deflections do not produce large stresses. It is possible to use rocker pylons, pinned at the base and top, but they are restricted to use with short spans. Also, pylons fixed at the base and with roller saddles at the top are possible, but limited to use with medium spans. The pylon legs may, in any event, be tapered to allow for the decrease in area required toward the top.
The statical action of the pylon and the design of details depend on the end conditions.
Simply supported, main-span stiffening trusses are frequently suspended from the pylons on short pendulum hangers. Dependence is placed primarily on the short center-span suspenders to keep the trusses centered. In this way, temperature effects on the pylon can be reduced by half.
A list of major modern suspension bridges is provided in Table 15.1.